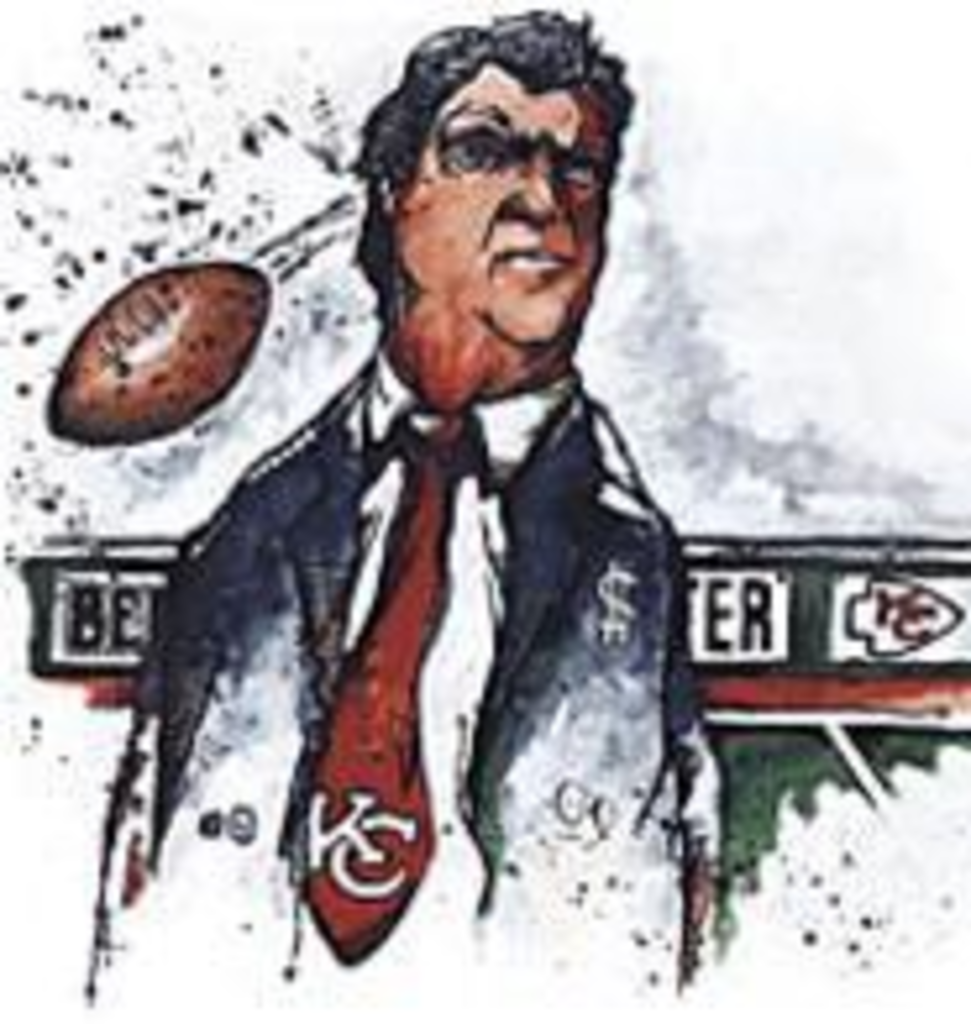 So what do Lamar Hunt’s bosses think of enduring another half decade of Peterson’s football leadership after twelve fruitless years? Hunt has more bosses than anybody in the city. They paint their faces red on Sundays and schedule their lives around Chiefs football from August to January. They maintain office hours in the Arrowhead parking lot, braving 25-below wind chills for up to six hours, most recently to watch a meaningless home finale against Denver. They sit on frozen plastic lawn chairs, flipping brats on glowing hibachis, talking about the Chiefs’ poor season through blue lips.

“I think it’s bullshit,” spits out Joe Brooks, a Topeka city employee. “I would keep Gunther; he’s an aggressive coach. But Carl Peterson has got to go.”

Icicles hang from the mustache of Darin Newman, a diehard fan from Chillicothe, Missouri. “Thumbs down on Carl,” says Newman. “I like Gunther as a defensive coordinator, but I’m not sure he’s the guy to be the head coach.”

Nearby, Mike Reiff overhears and disagrees. “I like Carl, and I’m glad he’s going to be around for another five years,” says Reiff, a history major at Park University. “But I think Gunther has a job waiting for him next year in Carolina as George Seifert’s defensive coordinator.”

Larry Kreisler, his wife, Laura, and their 22-year-old daughter, Breanna, sit inside their custom-painted Chiefs van in the first row of the parking lot. Neighboring autos sport a crusty coat of salt, but the Kreisler van is washed, waxed, and detailed.

“Thumbs down all the way,” says Larry Kreisler, a corrections supervisor for the City of Kansas City, Missouri. He faults Peterson’s tight purse strings for the Chiefs’ annual failure to make the playoffs. “When you have one of the lowest-paid coaching staffs in the NFL, you get what you pay for,” he says.

From the front passenger seat, Laura Kreisler piles onto Peterson. “Unless he changes, we’ll continue to lose,” she says. “But he will never change because that would mean having to admit he made a mistake.”

Kelly Blair made the trip up to Arrowhead from Rolla, Missouri, where she works as an engineer. She leans back in her lawn chair and speaks for a group of about eight friends.

“The Chiefs need a major change,” sighs Blair. “They need a big-league running back, and they need to get that running back by committee crap out of here. Carl needs to go. Gunther was the last guy on my list when Carl named him to replace Marty (Schottenheimer).”

A shivering friend disagrees, pointing her finger at the Chiefs’ assistant coaches for the team’s woes this season. “I’m okay with Gunther,” says Julie Turner, a Spanish teacher at Smith-Cotton High School in Sedalia, Missouri. “Carl’s okay too. I think the problem is Jimmy Raye and little (Kurt) Schottenheimer.”

Rick Vetter, a data center worker in Topeka, is livid about Hunt’s re-signing of Peterson. “I think it sucks,” snarls Vetter, who starts making his way into Arrowhead Stadium an hour before kickoff. “It’s time to click the ruby slippers and get everybody in the front office and on that coaching staff the fuck out of here!”

Few Chiefs fans are more devoted than Weird Wolf, who gets his name from his eccentric game day getup. He comes complete with wolf ears, claws, fanged shoulder pads, and a facial paint job that would make even the Grinch blush. Weird Wolf’s real name is Lynn Schmidt, and he works as a Web site graphic artist “imagineer” for Systen LLC in Lenexa.

Weird Wolf is neither excited nor depressed about Peterson’s new contract. “I had hoped there would be a change in the whole guard when Marty left,” says Schmidt. “But when you look around the NFL, who else is there to replace Carl?” Schmidt likes Cunningham but wants to see the assistant coaches axed. “And the running back by committee is a national joke,” adds Schmidt.

Not far from Schmidt, a small tent houses some of KC’s finest. Police officers are a resourceful bunch, even when they’re off duty and dressed like every other Chiefs fan. This group had rigged up a heater, making the tent one of the more comfortable tailgate parties. But kerosene wasn’t the only fuel keeping these cops warm.

Bloody Mary in hand, Officer Donna Greenwell fires off her opinion of Peterson’s new contract. “I think Gunther’s great,” says Greenwell. “What the Chiefs need to do is get rid of Carl and let Gunther coach the way he wants to.” Peterson’s keen business sense doesn’t impress Greenwell. “All (Peterson) ever talks about is making money. He’s always talking about the 99 percent season-ticket renewal. All he wants is to fill up the stands. He never says anything about winning a Super Bowl anymore.”

Asked to give a thumbs up or down on Peterson’s new deal, the dozen cops in their toasty tent oblige: 11 thumbs pointed toward the ground.

The bosses have spoken.