Eyes, skin, scars — the faces, the details, are matter-of-fact. Painter Ryan Wilks has found an unsensational calm in a roiling subject, one portrait at a time.

For Gender Treason, a series on display this month in the lower-level gallery at the Leedy-Voulkos Art Center, the artist depicts members of the LGBTQIA community — that’s lesbian, gay, bisexual, transgender/transsexual, queer, intersexual, and asexual — on canvas as well as on the page. In this small room, the effect is big. Greater, in fact, than the sum of its gestures.

The title is unsubtle in its reference to the harmful rhetoric to which many in this community have found themselves subjected. There is an idea that one who deviates from prescribed sexuality, including anyone more comfortable as a they/them than as a strict he or a she, is committing a betrayal. You understand the consequences of this fallacy as you encounter the people whom Wilks has chosen for his series. The dozen figures here are a mere slice of this population, but the stories they tell, in text accompanying the paintings, convey significant depth of experience and feeling. Gender Treason aims to discuss gender during a moment of exceptional identity-consciousness; with the words in this exhibition more than with the art alone, Wilks largely accomplishes this ambition.

In each of the 48-inch-by-56-inch oil portraits here, he suggests a different perspective on sexuality, setting the familiar against the less familiar, the body against the mind, as one assembles a complex puzzle. Wilks has painted each figure against a single color, emphasizing personal detail in a purposely underwhelming way. The images separate fluidity of gender or sexuality from the perception that there is anything exotic in that movement. Wilks has said that he picked his subjects in order to “de-sensationalize queer issues.” Gender Treason follows through.

Among the most straightforward are “Grant” and “Ana,” both of which stare back at us with a casualness that belies their striking poses. These two paintings show Wilks at his most confrontational, daring us to judge what the figures are, or are not, wearing. The Ana we see radiates animal heat, her untamed cascade of hair and dominating breasts lending weight to the image. Though her mouth is firm and shut, the softness above her staring eyes relaxes the expression just enough for us to do the same. 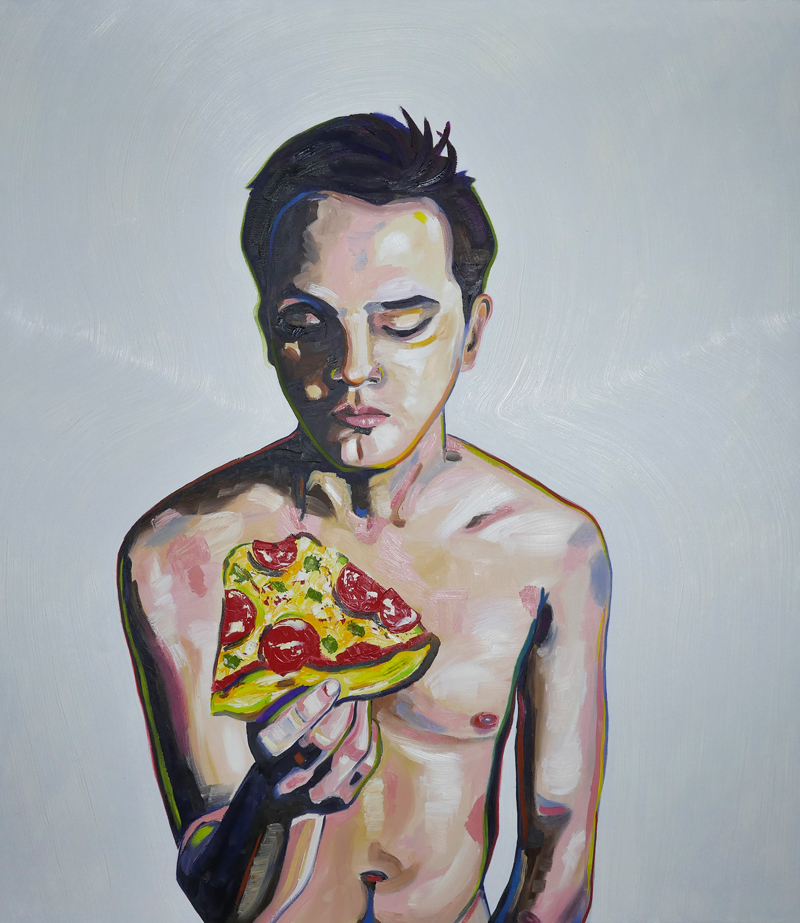 “Melissa” faces out, too, with a less-chilly affect, and toward some distant point to which we in the gallery have no access. The ruby background instills anxiety. “Brian,” on the other hand, looks crestfallen as he regards a slice of pizza. A creamy background butts up against the mass of black that casts the face in shadow, adding mystery to the expression.

In “Avery,” Wilks employs colors that wouldn’t look out of place in paintings of the Enlightenment. The luscious crimson blanket pops against the slate-blue background and the white light cast on the skin. “Anonymous” is the only subject whose face eludes us entirely, blocked by a mask of red. The accompanying story explains that its subject is HIV-positive and has elected not to disclose their identity. The red that replaces the face is the red of history, the red of malady, a harrowing red.

Wilks’ style shows progress, even from one painting here to another, but his technique isn’t quite up to Gender Treason’s self-imposed rigors. He sometimes declines to capture his subjects’ essence — a slippery matter even in more lighthearted settings. The plainness of his portraiture suits the project, but much of it wouldn’t hold up outside Gender Treason’s context. Half a dozen more carefully wrought paintings, rather than a jurylike 12, might have been more effective, might have swept us off our feet instead of cueing sympathetic nods.

Ultimately, it’s the exhibition’s multidisciplinary facets that rescue it from dullness — the biographical texts. Reading them, you understand what Wilks has achieved with Gender Treason, which comes with no glib asides, no cleverness,  no exploitation. Its conceit doesn’t feel like a gimmick, and its words do not storm up to a podium and claim to know what’s best for everyone.  And the words in turn allow the images to reveal the people beneath the paint, the stories enlivening the art. Wilks lets us listen in on an important, localized dialogue within a large and fraught global conversation, and he does it in the confines of an intimate gallery. His dedication to honest portrayals — and to not speaking for, or over, the voices he has selected — trumps his limits as a painter. Here are 12 persons, unisolated, human, entirely themselves.