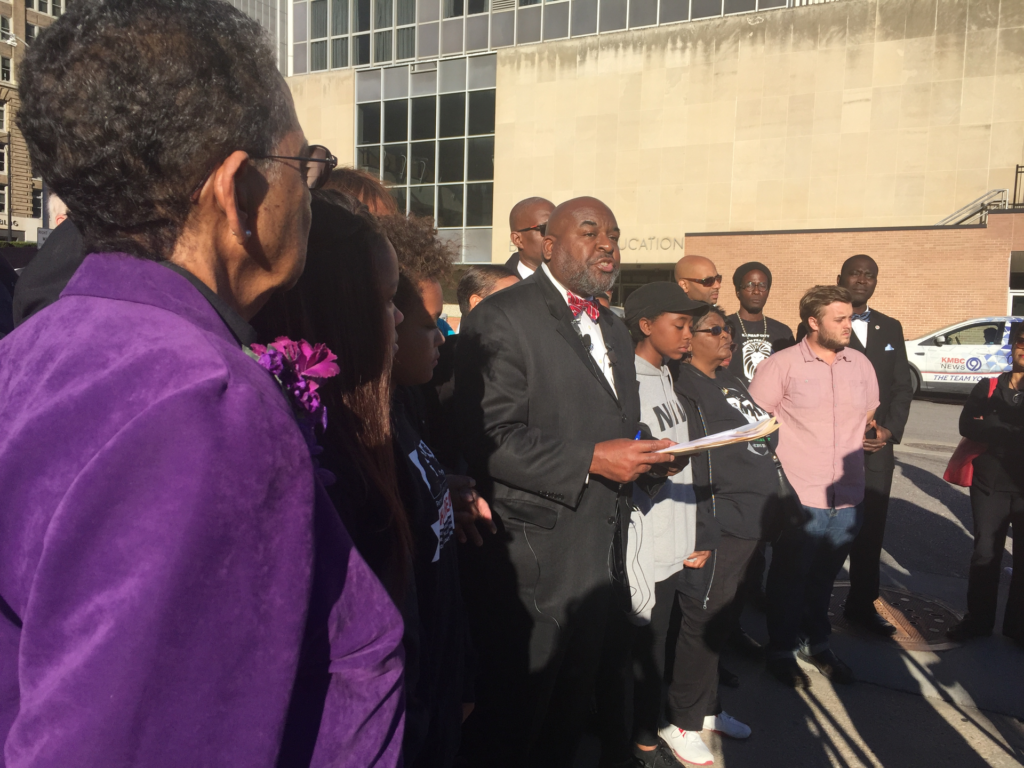 A coalition of civil rights activist groups is asking the FBI and the U.S. Attorney’s Office to open an investigation into the death of Ryan Stokes — who was shot twice in the back by a Kansas City, Missouri, police officer three years ago — as a violation of the Civil Rights Act.

The Rev. Vernon Percy Howard Jr., president of the Southern Christian Leadership Conference of Greater Kansas City, said Wednesday that the police department’s own investigation had uncovered “several grave and severe discrepancies between the police narrative and the facts of the case.”

Howard spoke late yesterday afternoon to reporters and more than 30 activists and family members outside the downtown parking lot where Stokes was shot, near the Sprint Center. Several others also spoke about the shooting, including Stokes’ mother, Narene Stokes, and his 4-year-old daughter. 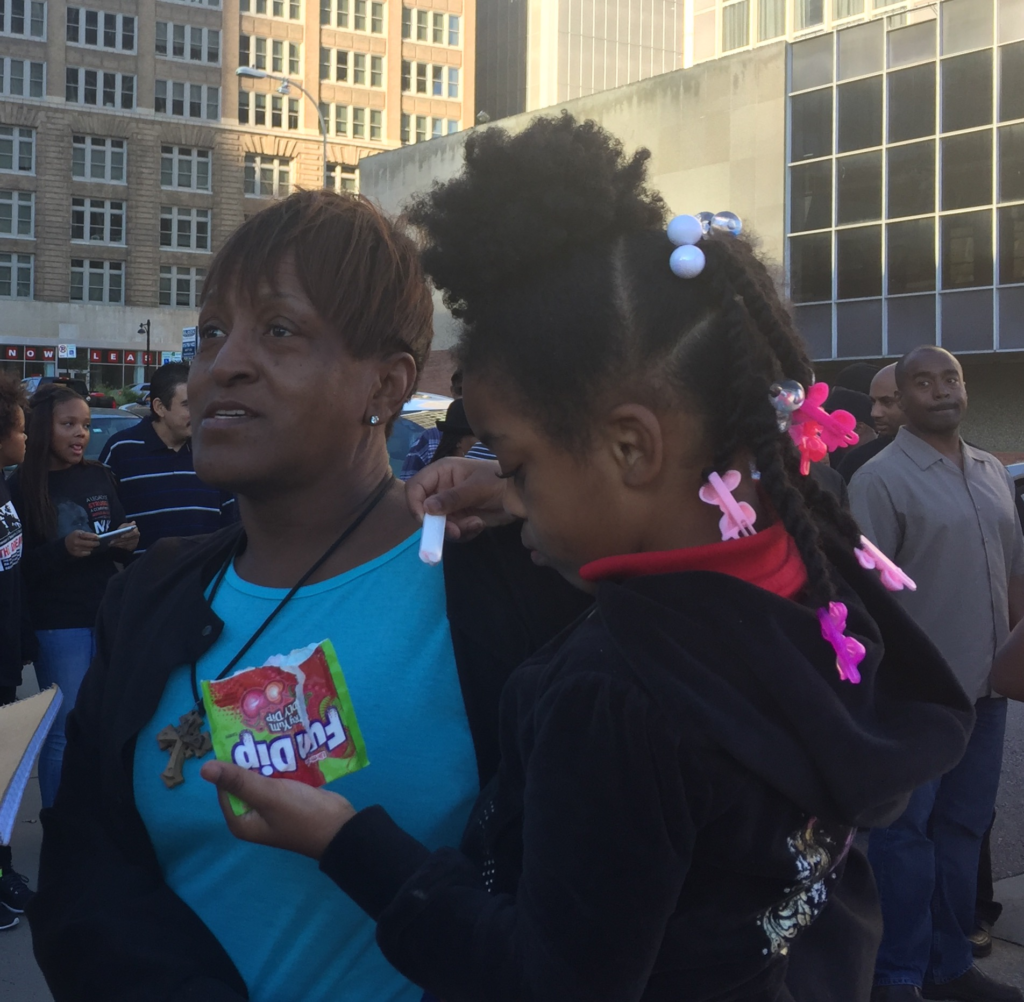 The coalition is made up of 20 area activist groups that have come together to find out why police killed the 24-year-old black man.

Stokes did not have a criminal record and was employed at his father’s dry-cleaning business when, in 2013, he and a friend drove to the Power & Light District one night in  2013. Later, they were accused by two white men of stealing a cell phone belonging to one of them. An altercation ensued, which police used pepper spray to break up. Stokes and his friend ran across the street. The friend had gotten pepper spray in his eyes, so Stokes went to get the friend’s car.

Stokes started jogging to a nearby parking lot, not knowing that the men who had made the theft accusation had pointed out Stokes and the friend to police and repeated the charge. Officers began chasing Stokes and radioed for assistance.

When officers handcuffed Stokes as he lay bleeding on the pavement, they found his friend’s flip-phone and car keys in his hand, police reports said.

Police acknowledged later that there had never been evidence that Stokes or his friend took the phone. The two accusers also acknowledged to police that they were inebriated when they accused Stokes’ friend of theft.

“We are just seeking justice for Ryan,” Howard told me Wednesday. “That’s all. A young black man who was unarmed is dead. And he has been presented as a criminal and an attacker of police.”

SCLC attorneys were preparing to contact the FBI on Thursday, he said.

It will be difficult to know for sometime whether the FBI decides to investigate. FBI spokesman Matt McPhillips says he can’t comment on any investigation, or confirm or deny that one is under way. That is the the agency’s standard policy in regard to information about investigations, he adds.

FBI Director James Comey and U.S. Attorney Tammy Dickinson could not be reached immediately for comment for this story.

Howard says one of the major concerns Stokes’ family and the coalition share is that the Kansas City Police Department’s own explanations of the circumstances surrounding Stokes’ death vary greatly:

“The commendation is either a fabrication or gravely mistaken,” the Rev. Howard countered, in an e-mail to other coalition members this past Monday. “In either case, it merits our next action,” which is to ask the FBI and the U.S. Attorney’s Office to investigate.

After the department’s shooting investigation was finished, detectives turned over the case to Jackson County Prosecutor Jean Peters Baker, who presented the evidence to a grand jury. By state law, grand juries are allowed to meet in secret, and the evidence presented them remains in the jury room. The grand jury that heard Stokes case found that the evidence the prosecutor presented did not warrant an indictment against the Thompson.

Michael Mansur, spokesman for the prosecutor, said Tuesday that Baker had appointed a special use-of-force committee to hear the evidence in the Stokes case before presenting it to the grand jury. Mansur said the special committee had concluded that Thompson had reasonable suspicion to believe that Stokes had a gun and presented a danger. He added that the committee did not believe the underlying allegations about the initial cell phone theft.

Since the Stokes case, Baker has changed the way police shootings are handled by her office. Instead of using a grand jury to indict, she has decided to present evidence to the use-of-force committee to determine if charges are warranted.

Having a use-of-force committee will allow for more transparency with all future cases, Mansur said. “We have changed our process so you can detail more clearly the finding of facts,” he explained. 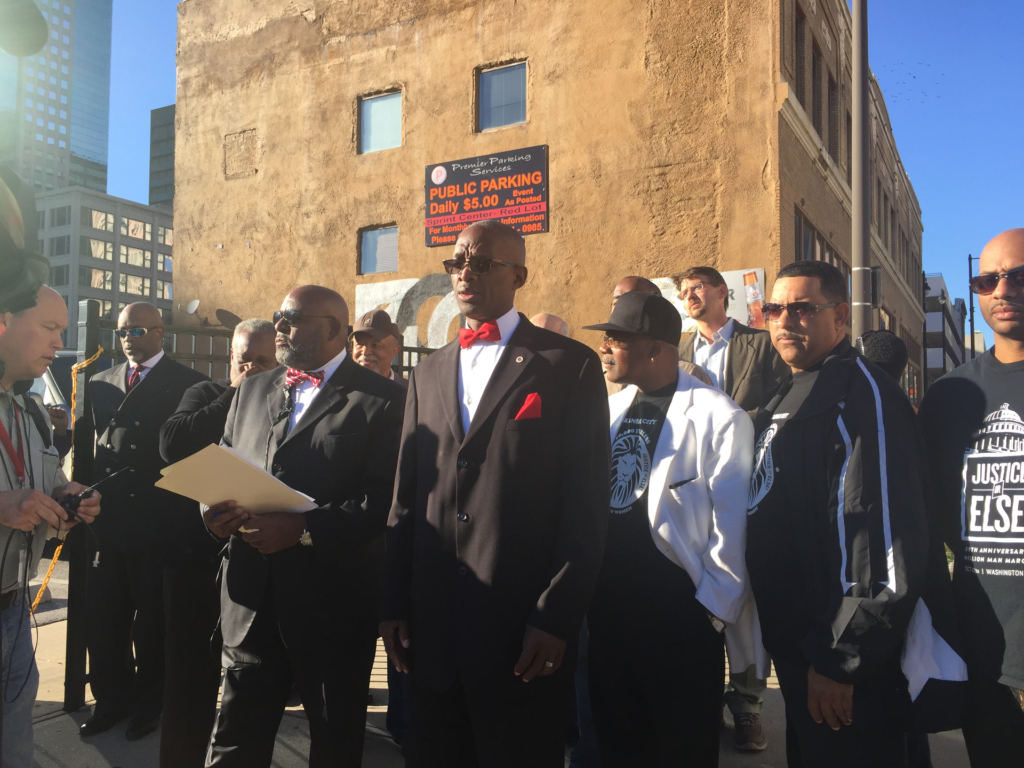 Last month, the coalition sent letters to the Kansas City Board of Police Commissioners, and several coalition members spoke at the board meeting to demand reforms, requesting that the board correct the record regarding the facts surrounding Stokes’ death and revoke the commendations.

This week, the board responded to these concerns in a seven-page memo. The board’s memo says that, because of the Stokes’ lawsuit, “we cannot discuss this matter in great detail.”

The board said it would not revoke the commendations it awarded to the two officers involved in Stokes’ death.

“P.O. Thompson was not indicted by the Grand Jury,” the board’s letter reads. “There is no basis for revoking the commendation given to either him or P.O. Tamara Jones.”

The report that supported giving Thompson an award and described Stokes pointing a gun at officers was attached to the memo.