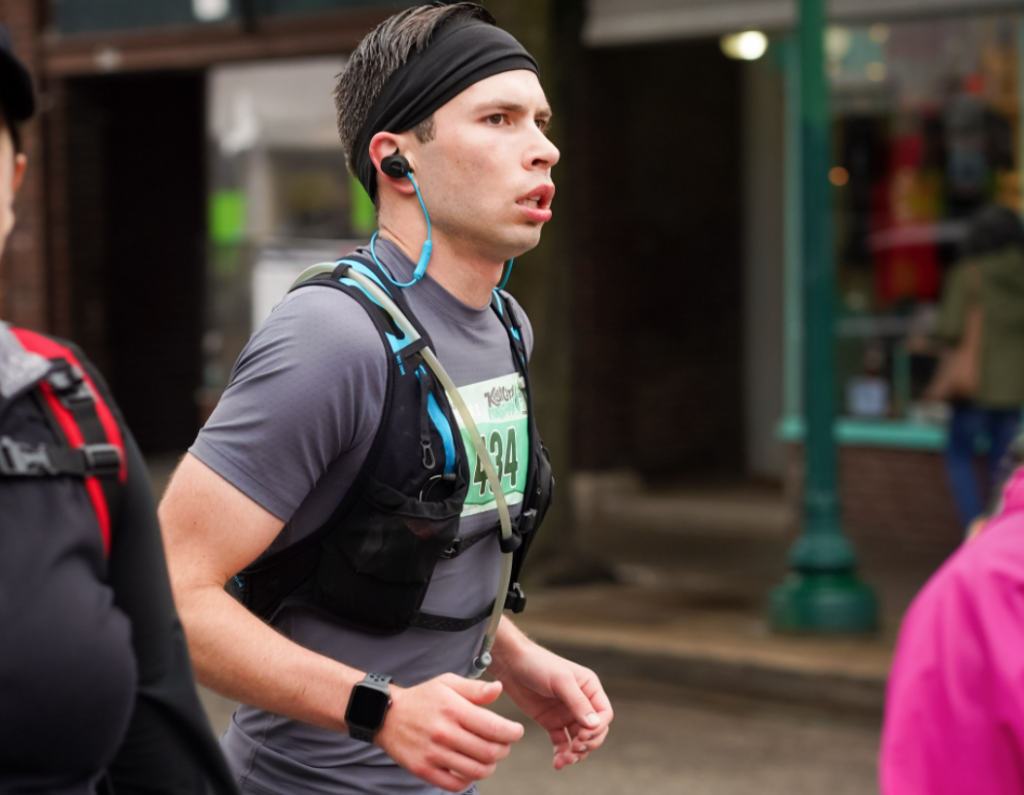 The author being sculpted by summer. // Courtesy Elliott Lee Scott

To mentally prepare for my most recent race, I binge-watched the reality show Naked and Afraid. For those of you who haven’t sat in horror through an episode, the premise is simple: one man and one woman try to survive in an inhospitable environment for 21 days with only 2-3 items between them.

Invariably, the heat, precipitation, and bugs cause competitors to tap out. To me, these are the same hurdles Kansas Citians deal with every summer. Thankfully not on the same scale as a Peruvian rainforest swarming with ants, but if you’ve tried running in 100% humidity through a cloud of mosquitoes, you know what I’m talking about.

Those first few runs in the high heat of summer are jarring, predominantly because it takes time for the body to adjust, something called “heat acclimatization.” What might have been an easy run during the spring can feel twice as hard as the heat and humidity increase. You might notice an elevated heart rate, rapid breathing, increased sweat output, and muscle cramps. All of those symptoms dissipate or lessen over time as your body learns to re-regulate metabolic processes.

Midwesterners don’t have the luxury of dry heat like residents of Arizona or Colorado. Instead, we wade through humidity, trapped in a wet, warm blanket of despair. High amounts of moisture in the air cause two significant issues for runners. First, humidity prevents sweat from evaporating, which in a cruel twist of fate causes us to sweat even more, negating the cooling mechanism of sweat turning to vapor. And second, wet clothes mean chafing.

Several summers ago, when I first began training for races, I chose to do a long run on a rainy, temperate morning. A cold front had moved in, bringing showers and cooler temperatures. After what felt like an eternity of sweltering days, a run in the rain sounded like a refreshing change of pace. A few miles into my workout, I noticed the telltale signs of chafing. My nips were sensitive, and a quick look confirmed my fears: they weren’t just irritated but bleeding. Shirt in hand, with rain stinging my wounds and dignity, I turned around and headed for dry clothes and band-aids. Since then, I use tape, band-aids, or anti-chafing balm in high moisture conditions.

Insects are another hallmark of the Midwest’s warm weather. Whether it’s cicadas, June bugs, mosquitoes, or ticks, our area has plenty of many-legged pests and distractions. They tend to be most active at dawn or dusk, leaving runners with a conundrum. Do you run during the cooler mornings and evenings, with high humidity and bugs? Or opt to exercise in the heat of the day when the sun can exacerbate dehydration and loss of electrolytes? Every athlete has a different preference. Personally, I choose high temperatures almost every time.

In a little less than a month, I’ll be running on the famed Mickelson Trail through the pine tree-covered Black Hills of South Dakota. With lower temperatures and humidity, as well as fewer bugs, it marks the end of a sticky, uncomfortable training cycle. However, even though I gripe about training during the summer, these trying conditions are what set me up for success. So, if you’re looking to set a personal best this fall, tape your nips, drink lots of water, dodge the bugs and go for a run!