Runner’s High: Going fully unplugged in the desert in search of better times 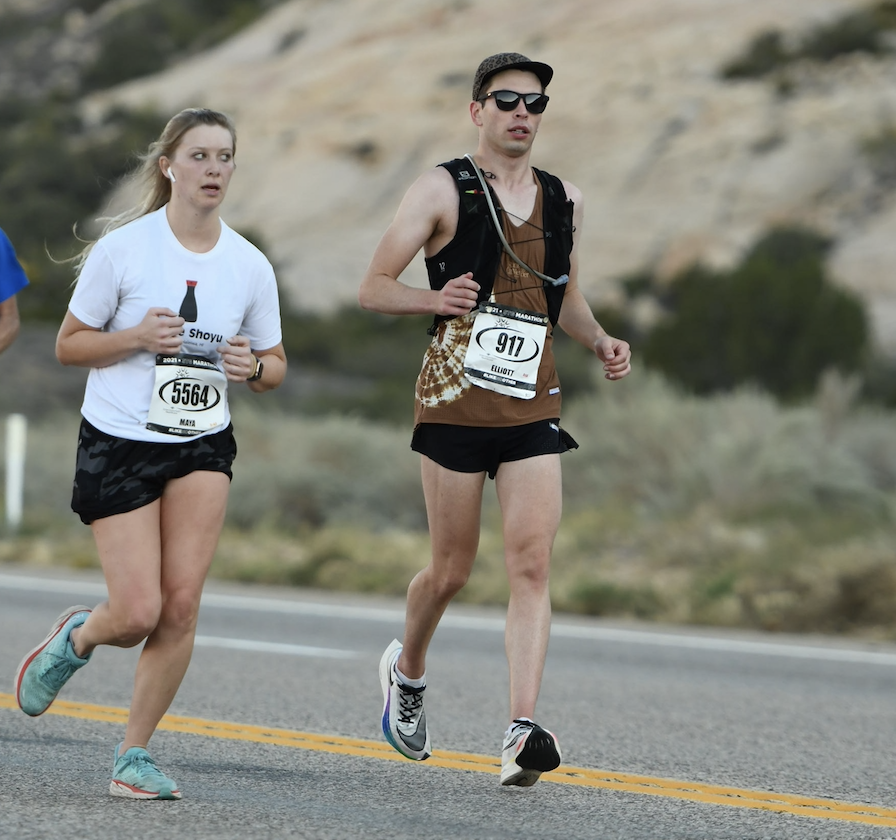 Look at Elliott run. He’s like a gazelle. Do those feet even touch the ground? Science has no idea. // Photo courtesy The Gazelle

Earlier this fall, the promise of a fast, point-to-point marathon lured me to the modest town of St. George, Utah. It sat among rust-hued bluffs, a small slice of suburbia rising out of the desert with stucco strip malls and clean, windswept streets. To the casual tourist, St. George was one of the last stops before Zion National Park. But for runners, it represented an alchemical mix of terrain, elevation, and weather that could result in a personal best or even a Boston qualifying time.

I was one of 7,000 participants who traveled to try their luck among the sagebrush and cacti. However, cautious hopes were tempered by the realities of my recent training: a failed 50-miler attempt and only two weeks of speedwork after months of long, slow miles. In a dramatic departure from my usual pre-race rituals, I decided to go off-script and adopt a more casual approach.

Pizza and a glass of wine replaced carbonara the night before. Cinnamon rolls were swapped for supermarket sticky buns. My checklist, with granular items like “drink coffee” or “apply chafing balm,” was thrown out the window. And although it felt freeing to not worry about every little thing, my cavalier attitude caught up with me at 5 a.m. on race morning.

As I prepared to leave the hotel room, I realized I wasn’t wearing my GPS watch. Quickly, I grabbed it from a backpack, stuffed it into my running vest, and hopped into the rental car. It wasn’t until I parked near the loading zone that I checked the battery level: 0%.

Suddenly, my entire game plan—pace alerts every mile and target heart rate zones—was off the table.

At the starting area, I clasped a cup of hot water in numb hands and huddled next to other competitors. In the darkness we waited anxiously, each person facing quiet doubts and fears. But almost like magic, night faded to the faint light of morning, and we were off.

I spent the first five miles weaving in and out of the masses, looking for an open spot where I could set my pace. At mile seven we began to ascend a long incline, which lasted until mile 12. During that first half of the race, I kept waiting for something to go wrong, whether it be a muscle cramp, heart palpitations, or difficulty breathing. To my genuine surprise, nothing happened.

I kept going faster and faster, building speed with each mile. The climbing sun set the desert ablaze with streaks of white, orange, and red painted across the rock formations towering on either side. Not to be melodramatic, but it felt transcendent—as if my entire existence was confined to moving through that barren and beautiful landscape. Down we ran into the town of St. George, the final mile markers punctuated by high school jazz bands and crowds of spectators.

By the time I saw the finish line, my legs burned, and I sprinted the last few yards. A look at the official clock showed the unimaginable. With a time of 3:28:29, I had improved my personal best by almost 19 minutes. I hobbled through a misting machine, much like a car wash, and a wave of emotion brought tears to my eyes.

Sometimes expectations, technology, and routines don’t empower us to accomplish greatness, but limit our dreams and diminish our aspirations.

Next time you train for a race, or simply want to go for a jog, consider leaving your watch and headphones at home. You might just have the best run of your life.