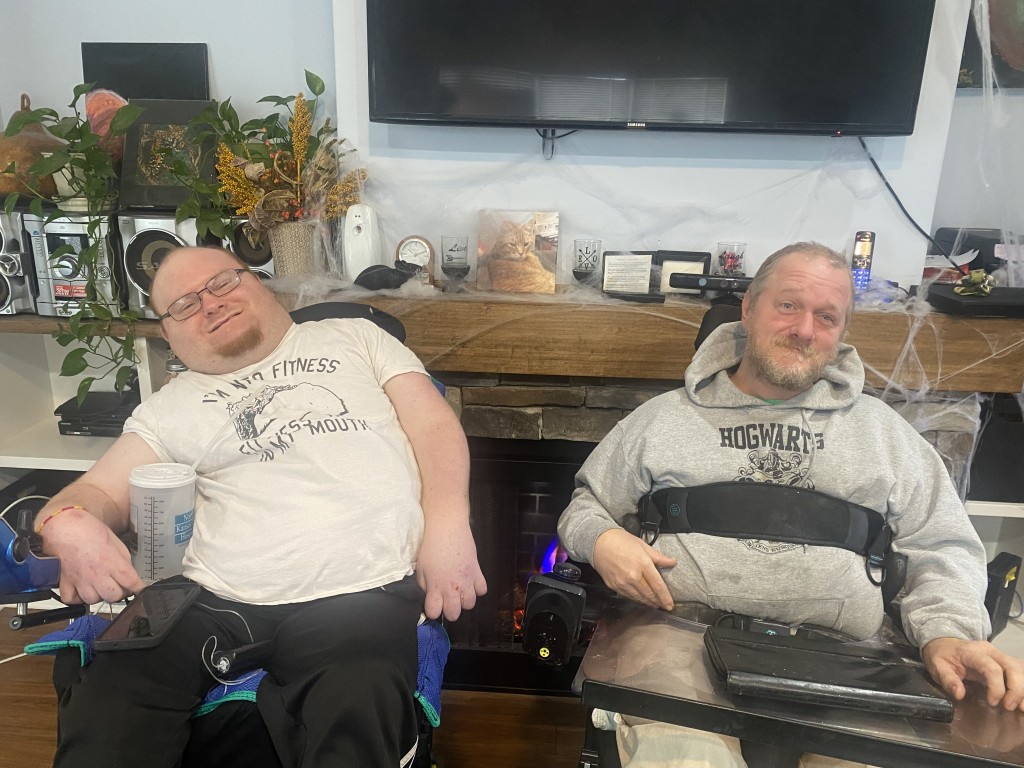 Nathan Powell and Gene Smith are a roommate-artist duo who sell their work as “Great Guys Art.”

This is in no way false advertising. After hearing what each of them has overcome to get to this point, “great” is probably a bit of an understatement.

Powell, 31, was paralyzed after being shot in the chin by a neighborhood friend when he was 12-years-old. The bullet would reach his spine, and, despite grim projections from doctors, he has made it out of every trial with his sharp wit quite obviously intact.

Smith, 45, has cerebral palsy and has been in a wheelchair for the last seven years following an accident while practicing judo—one of his favorite pastimes. Smith is the quieter of the two, and also the more seasoned artist.

The two have lived in a home near Liberty Oaks Elementary School for over three years. The property was purchased in 2016 by Life Unlimited, a Liberty-based nonprofit organization serving Kansas Citians with a disability, and crafted specifically for them, thanks in part to a grant from the Developmental Resource Board of Clay County.

They moved in Oct. 28, 2018 and spared little time before they converted the garage into their own personal art studio. It didn’t take long for Life Unlimited’s support staff to dub the spot “Great Guys House.”

Smith has been making art for decades now, citing the late David Adelman, his former art teacher at Hickman-Mills High School, as an early source of encouragement.

Powell makes what is called spin art, a stencil-based method that utilizes a drill to spin paint onto a canvas attached to a board to hold it all in place. He got the idea from TikTok, and particularly enjoys using the medium to make Kansas City Chiefs-themed pieces.

The Great Guys Studio contains a multitude of projects, some of which are long-term, while others are ready to go for their next show, set for Nov. 12-14, out of their garage. 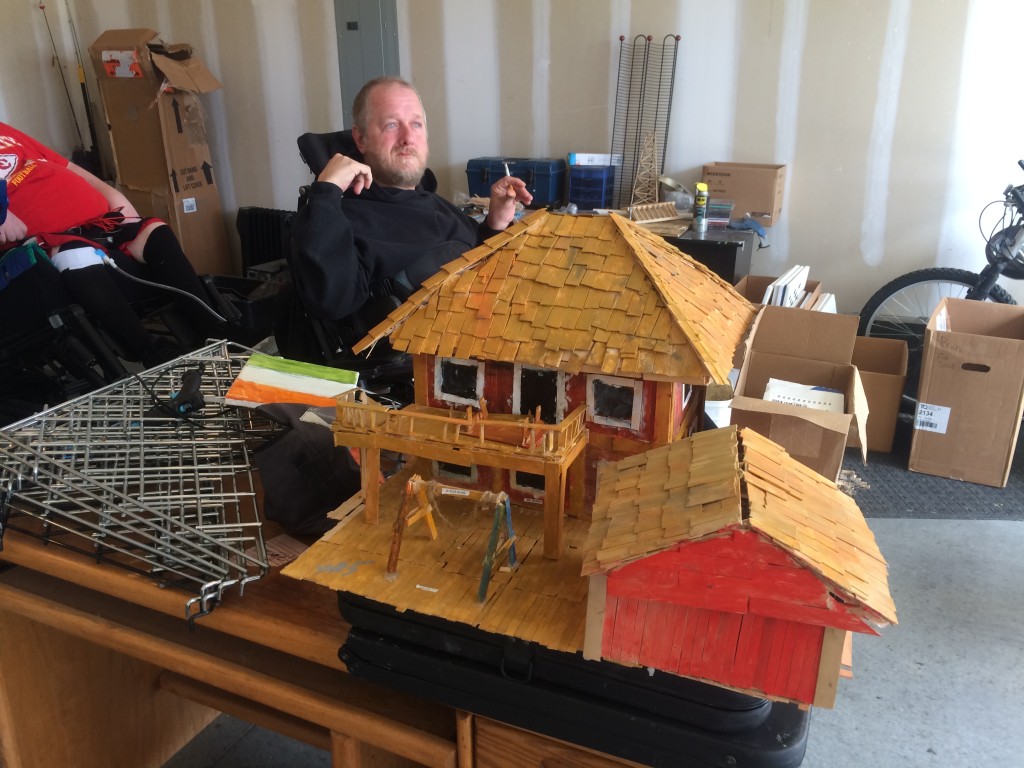 Smith makes a greater number of these pieces, most of which are paintings or colored pencil drawings with a general leaning towards abstract impressionism.

He also enjoys taking photos from the internet and reworking them onto a canvas with his own deliberate alterations, a process known as reverse transfer imaging.

Many of these are portraits or landscapes, though he branches out to such projects as a popsicle stick house with a working (and very delicate) retractable garage door.

Another of Smith’s paintings depicts a storefront with a sign that reads: “Help Wanted. No Irish,” a reflection of his ancestry which he prepared for the last Great Guys Art Show at the Oct. 9 Weston Irish Festival. 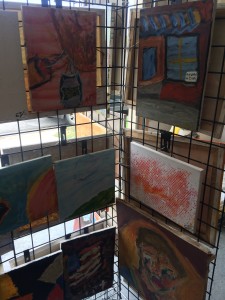 Some of Smith’s works on display in his garage-studio. // Photo by Tyler Schneider

Smith sold roughly 150 pieces at the Weston show and made around $600. Powell sold 20 of his spin artworks for $150. The money they earned will go towards their ever-growing list of living expenses.

“Medicaid does not pay for everything, and there’s a lot of stuff we have to pay for out of pocket,” Powell says. “So the money we make at shows goes towards things we need on a daily basis, like household needs, medical needs. It also helps us get out into the community and pay for more paints and canvases.”

“Honestly, while they do get a little bit of money, it is definitely under $100 per month,” Denice Bartley, a longtime direct support professional working with Powell through Life Unlimited, says in agreement.

While the proceeds do help tremendously, the greatest benefit for Great Guys themselves is on their mental well-being.

“When I get depressed, I do more portraits. That will make me feel better than I would doing something else. I’ve probably done 30 or 40 portraits,” Smith says.

Powell’s story has been saturated with frequent medical scares.

He remembers the inciting incident quite vividly. It was Sept. 9, 2000, and Powell was hanging out with a neighborhood kid when they found a gun at the latter’s grandparent’s house. 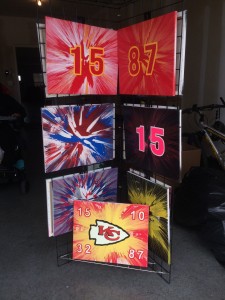 Nathan Powell’s spin art on display in his garage-studio. // Photo by Tyler Schneider

“We started playing with it, we were just shooting it up in the air. And then I decided to quit to go and work on my lawnmower. So he put the gun up in his dad’s truck and followed me over to my house. When I started working on a lawnmower, he’s like, I’m getting bored. So he said that he was going to go back home. I asked him to pick up something at the curb in my yard on his way because I needed it for my lawnmower,” Powell says. “But he didn’t pick it up, he just went straight home. So I went down and picked it up myself. And as I bent over, I heard the gunshot. So I stood up, and I looked across the street, and he was pointing it at me.”

Powell’s assailant went and alerted his victim’s mother without explaining the severity of the situation, or his own role in it.

“She went down to check and she saw me lying there, covered in blood and she started freaking out. I was like, ‘Mom, I’m having trouble breathing,’ because all the blood was filling up in my lungs. Because it shattered my cheekbone, they had to put a metal plate in my chin. And the doctors told my family that I wouldn’t be able to breathe on my own, I wouldn’t be able to move anything from my neck down,” Powell says.

Since then, Powell had stints at the Children’s Mercy Hospital and eventually the Shriner’s Hospital in Chicago. His official diagnosis would later be confirmed as an incomplete C3-C4 spinal cord injury.

Over the next two years, the accident exacted a crippling toll on Powell’s mental health.

“I started having severe anger, and I took it out on everybody. I had severe depression. I just didn’t want to live. I ended up eventually having to be placed in a nursing home,” Powell says.

At 17, he found an escape after longing for greater freedom as one of the first men to be taken in at the Immacolata Manor—an independent living facility which has since become the organization that is now Life Unlimited.

“A nursing home really wasn’t for someone that was my age. I wanted to be somewhere where I could go out in the community, because [at the nursing home] I didn’t really go anywhere. I just pretty much stayed in my room,” Powell says.

Now, in tandem with Smith and another roommate, with assistance from Life Unlimited, Powell is now able to go out and see his beloved Chiefs and Royals play. He has become friends with Chiefs legend Art Still, among other local celebrities. 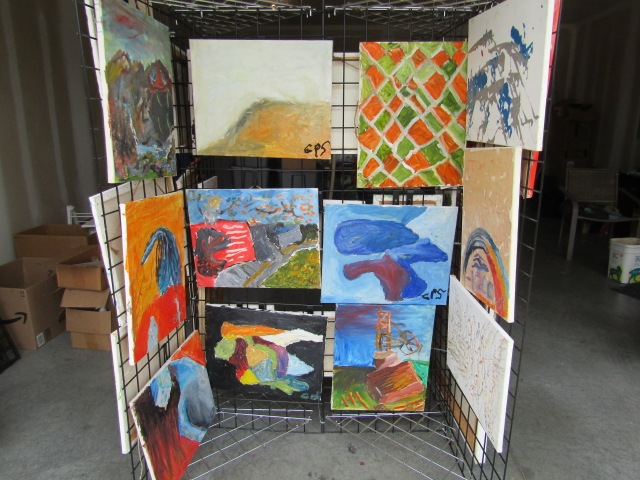 More of Powell’s work on display. // Photo by Tyler Schneider

More of Powell's work on display. // Photo by Tyler Schneider

The pair also goes out occasionally, with Smith flashing a toothy grin as he cites Twin Peaks as his favorite place.

Though Smith is the more reserved of the two, his sense of humor shines through in moments like these. Earlier on in the day, he had mentioned that his birthday, Oct. 5, meant that he was a “New Year’s baby.”

While he’s not nearly as interested in mainstream American sports, Smith had earned his blackbelt in judo prior to his injury. He still follows combat sports like MMA with enthusiasm and also cites an interest in politics.

Powell has been busy with a series of charitable efforts as of late. He has worked with the organization, Think First, a victim’s rights advocacy group.

He has spoken to many organizations in an effort to inspire hope in people going through similar plights to what he was forced to endure as a teenager. Most recently, he helped guide a man named Steven Keener who has an eerily similar situation to his own.

“This woman that used to take care of me, her boyfriend recently got shot, and they’re paralyzed from the chest down,” Powell says.

Powell is helping to organize a Nov. 6 fundraiser for Keener, who is appreciative of the support and the ability to share his pain with somebody who understands exactly what he’s going through.

Through these efforts, his sports fandom, and his art, Powell has come a long way from being the rightfully angry young man that was forced into a nursing home. He is now more optimistic and hopeful than he has ever been since the accident happened two decades ago.

“I mean, there are some days where I have my days, but for the most part, I’m pretty positive and just looking forward to living life,” Powell says.