Room With a Brew 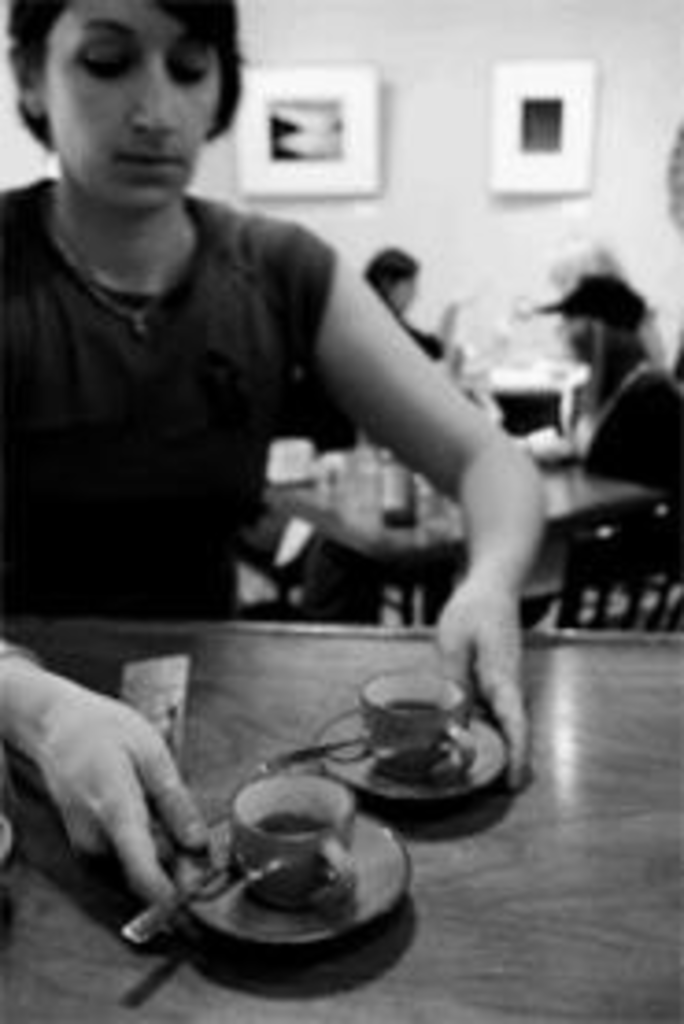 Two young chefs, Ted Habiger and Andrew Sloan, were using their beans when they realized that most local coffeehouses don’t have very good food — that is, if they even offer anything more complicated than a crumbly old scone — and the kind of breakfast joints that used to be called coffee shops typically don’t serve the best java. Seeing a niche just waiting to be filled with a combination of classy coffee and cuisine, the business partners (who were already operating a catering company) decided to turn the nicotine-stained space at 1719 West 39th Street into a tasteful little breakfast-and-lunch place called Room 39.

The neighborhood hardly needs another coffeehouse. There’s a shiny Starbucks on the very same block, and a few steps to the east of that is the distinctly laid-back Crave Café. The location that Habiger and Sloan chose to rehab (with help from their spouses and friends) had been vacated by yet another java joint, Muddy’s, which served decent coffee but never would have won any awards for food, friendliness or ambience.

If you remember what Muddy’s used to look like, you’ll find this storefront’s bright, light-filled transformation as jolting as a shot of espresso. The formerly frumpy room is now strikingly sleek and stylish, with red-oak floors; walls painted in shades of mustard, tomato and blueberry; shiny gilded mirrors; and a rotating collection of artwork by local painters and photographers.

The place looks so sophisticated that it sometimes intimidates potential patrons, says Habiger, who cringes when a new customer warily walks in, sees linen napkins on the tables and makes the automatic — and incorrect — assumption that the place is too expensive. That’s one of the reasons he and Sloan have resisted the idea of tablecloths. “That might really scare customers off,” he says.

True, but it would also muffle some of the noise bouncing off all the hard surfaces. There’s little not to like about Room 39, but the sound level can be annoying, especially when the dining room is full, the espresso machine is squealing and steaming, plates are clattering and glassware is clinking. It’s a lively cacophony, but trying to have any sort of quiet (much less intimate) breakfast-table conversation can be frustrating.

Still, the food is so good that it makes the noise bearable. Habiger and Sloan alternate in the kitchen (where Sloan’s wife, Shay, sometimes works, too), so that there’s always one of the owners working the front of the house — along with Habiger’s wife, Jackie, the swift-footed waitress, and his brother-in-law, Michael, the official barista of the bunch. The menu isn’t complicated — four constant breakfast dishes and a rotating daily special. The half-dozen choices on the left side of the lunch menu don’t change very often, but the stuff on the right side of the menu changes every day.

Well, six days a week. Room 39 is open Monday through Saturday, but Sloan and Habiger (and their wives) are having some debate about opening on Sundays — a very busy day for the popular Bell Street Mama’s right across the street — and maybe, once they get a liquor license, for dinner.

“But I’ve got to tell you,” Habiger says, “it’s awfully hard to get up on Sundays.”

It’s tough, opening the restaurant at 6 a.m. for the coffee drinkers and then getting the kitchen up and going an hour later when the breakfast crowd starts coming through the door. Since Room 39 opened last November, I’ve stumbled in a few mornings myself, blearily sipping a signature blend of Roasterie coffee that Sloan and Habiger designed themselves and reading The New York Times until I can focus on one of the best biscuits-and-gravy plates in town. Lately, though, I’ve been discreetly requesting a half-order — just one pillowy biscuit blanketed by a creamy sauce thick with chopped spicy Italian sausage.

Other mornings, I’ve preferred to start the day with something that seems lighter, forsaking the hefty egg, bacon and cheese panini (I prefer it as a lunch dish; thankfully, it’s on both menus) in favor of the quiche du jour. That fluffy wedge of baked eggs and cheese comes with an ever-changing array of ingredients — Sloan’s variation with potatoes and fresh leeks is my favorite — and maybe a little homemade fruit muffin on the side.

The two most elaborate breakfast choices are available only on Saturday. The Room 39 version of French toast is made with buttery, house-made brioche coated with cinnamon-flecked egg custard; it’s absurdly rich, but even my fussy friend Marilyn fell in love with it. And the steak and eggs Benedict comprises an Earth Grain English muffin with a fork-tender beef filet, organic spinach and poached eggs, all draped with a silken béarnaise sauce. It’s an extraordinary way to kick off a weekend — or celebrate the previous night’s exploits.

Lunch is an equally sensual experience, particularly when it involves an aphrodisiac vegetable like asparagus, battered in an airy tempura, flash fried and served with a spicy saffron aioli. It was a refreshing spin on this spring vegetable, though it almost inspired more hostility than love when my friend Carol Ann and I nearly argued over the last spear during our lunch together.

Carol Ann, an interior designer, loved the way Room 39 looked (though she thought the harsh noise level “dimmed some of its attractiveness”). She was even more impressed with the visual presentation of her meal, which included a unique grilled-chicken salad. Habiger and Sloan grill up an entire free-range Campo Lindo breast, slice it and fan it out on a bed of spinach and arugula, shaved cheese, radishes and whole toasted almonds, then splash the whole thing with a tart preserved-lemon vinaigrette. It deserved high marks, Carol Ann said, for “taking a boring Midwestern luncheon dish and turning it into something elegant and delicious.”

Speaking of which, I’m a fan of this restaurant’s notorious $8 hamburger, made with 8 ounces of McGonigle’s ground chuck and sirloin. The price has raised eyebrows, Habiger says, but generated no complaints so far. Still, at that particular lunch, I decided to take a walk on the wilder side and ordered one of the costlier lunch offerings, a steak salad with arugula and spinach topped with chilled tenderloin, pungent blue cheese, crispy leeks and a brassy Dijon vinaigrette.

In all of my forays into Room 39, I’ve always felt too full to order dessert. But my dining companions who have indulged are always drawn to the same confection, a tiny pot of crème brûlée flavored with a hint of espresso and crowned with a perfect amber crust of burnt sugar.

“We wanted one dessert that could come out of the kitchen quickly and one that incorporated our love for coffee,” Habiger says.

Even if you’re not a java fan, Room 39 positively bubbles over with culinary creativity and, even more appealing, a warm, friendly atmosphere. I’ll have another cup.