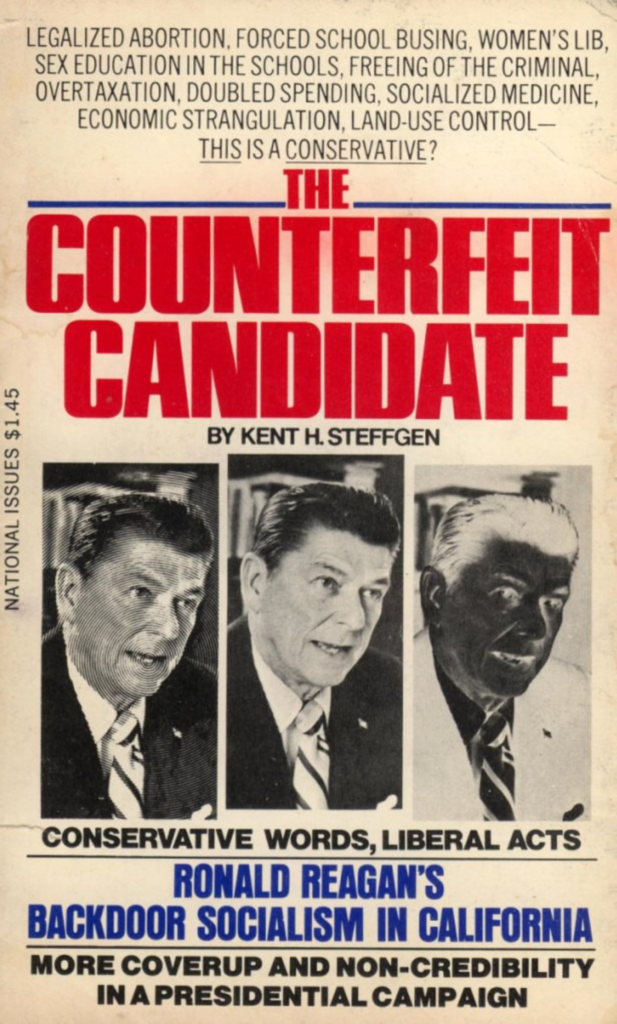 Each Thursday, your Crap Archivist brings you the finest in forgotten and bewildering crap culled from area basements, thrift stores, estate sales and flea markets. I do this for one reason: Knowledge is power.

ALSO: Maybe it would just be easier if the fringe right released a list of everyone who isn’t a socialist.

Representative Quotes:
“In 1969, he signed a bill to outlaw the internal combustion engine by 1975.” (page 14)
“New York is on its way down for real. It is never coming back; repeat, never. It will either end up a ward of the public government or in a state of anarchy, one or the other.” (page 37)

This spurious little volume, Kent H. Steffgen’s second book-length attack on the then California governor, assails the wrinkly ol’ nappy-time legend that today’s conservatives imagine twinkling down from his starry heaven like God in It’s A Wonderful Life.

Yes, before they came to believe that Reagan’s tough-talk and military spending somehow led to the 70 years of infrastructure neglect that destroyed the Soviet Union, some John Birch-society doubting Thomases dared to trash the Gipper. Steffgen snarls that Reagan is “an impostor,” a “hopeless incompetent,” “a practicing socialist” and “the smoothest salesman socialism ever had.” He even predicts that a president Reagan would be “the biggest spender since Franklin D. Roosevelt,” which is total — oh. OK. We’ll give him that one.

Anyway, reading such invective, your Crap Archivst feels a naïve twinge of hope. Perhaps today’s political discourse can learn from the stupidity of the past! Permit me to address directly any members of the talk-radio right who might have stumbled here on their hunt for things to be outraged by:

Dear Talk-Radio Right,
Do you really want to sound like this asshole?
— Alan