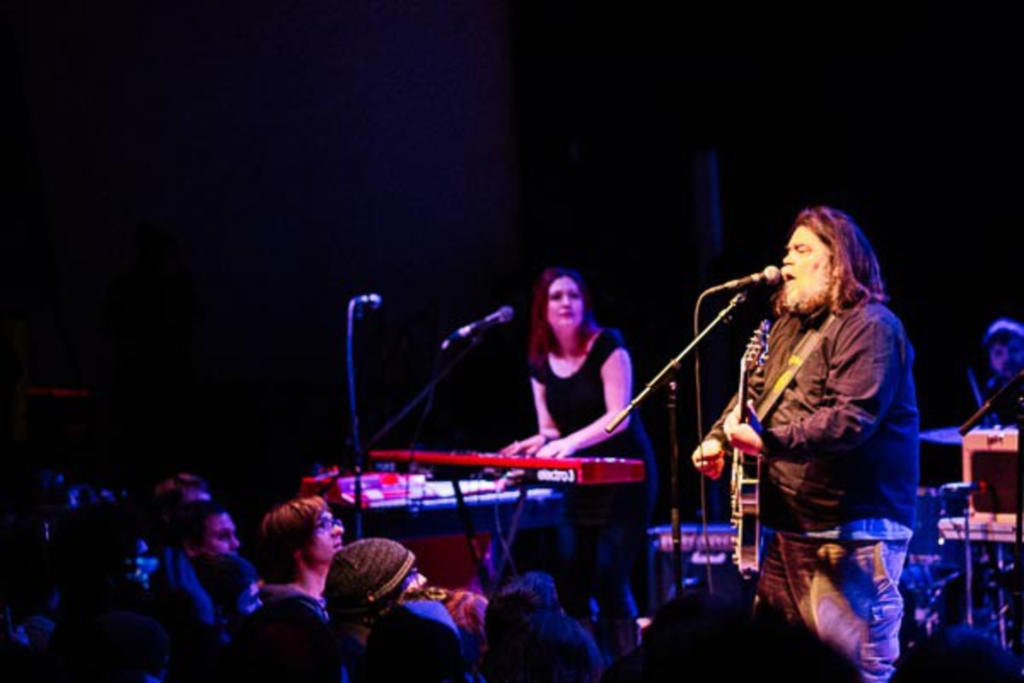 For a full slideshow of the evening, go here.

The roads were slick, and it was cold out, but a bunch of people packed into the Granada on Friday and washed their brains out with psychedelia. Two long lines of people stood on the chilly sidewalk for a while to get inside the show. The Golden Animals finished their set while the room filled up with bodies. It’s perfectly likely that their set was good.

From behind a merch table, Roky’s son and backup singer, Jegar, apologized to people browsing records and shirts, saying he had to go play with his dad but would be back. A few minutes later, the Hounds of Baskerville took the stage to an applause that grew when Roky Erickson entered. Passing the guitar strap over his neatly brushed mane, Erickson rested a blue Gibson against his belly and began the set with a bright rendition of “Cold Night for Alligators.” 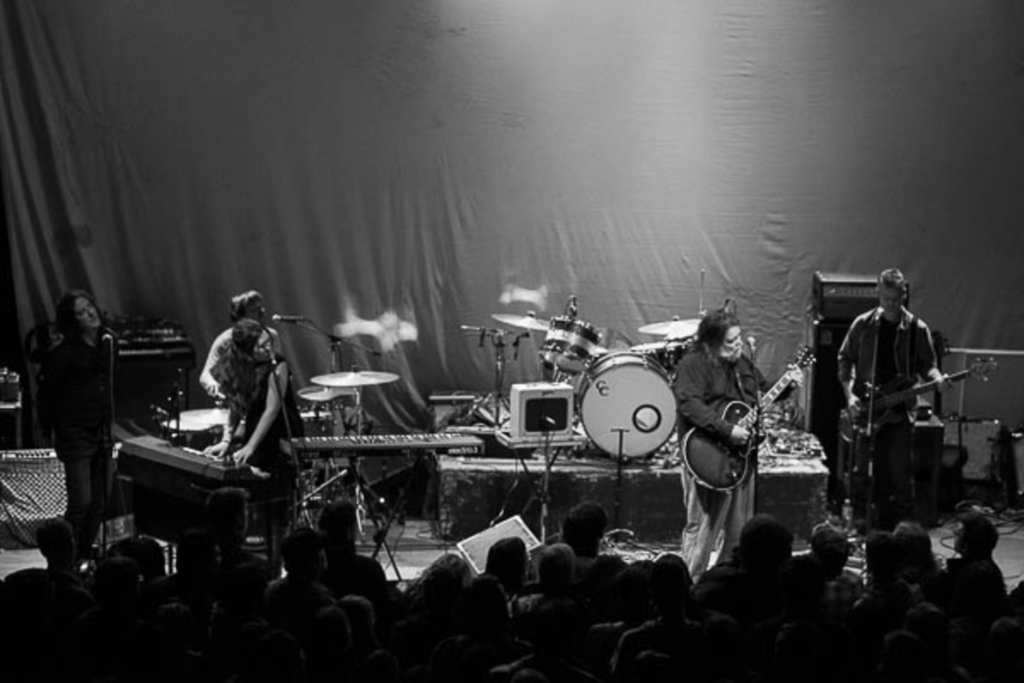 Though not entirely at ease onstage, Erickson found his grooves intermittently, at points wailing some brilliant inflection of his eerie melodies, like during their lively version of the Elevators’ “Fire Engine.” When the songs would move along too quickly, Erickson would sometimes abandon his peculiar vocal deliveries, skipping out on a few beats and words to catch his breath or remember the lyrics, then jump back in when it felt good. 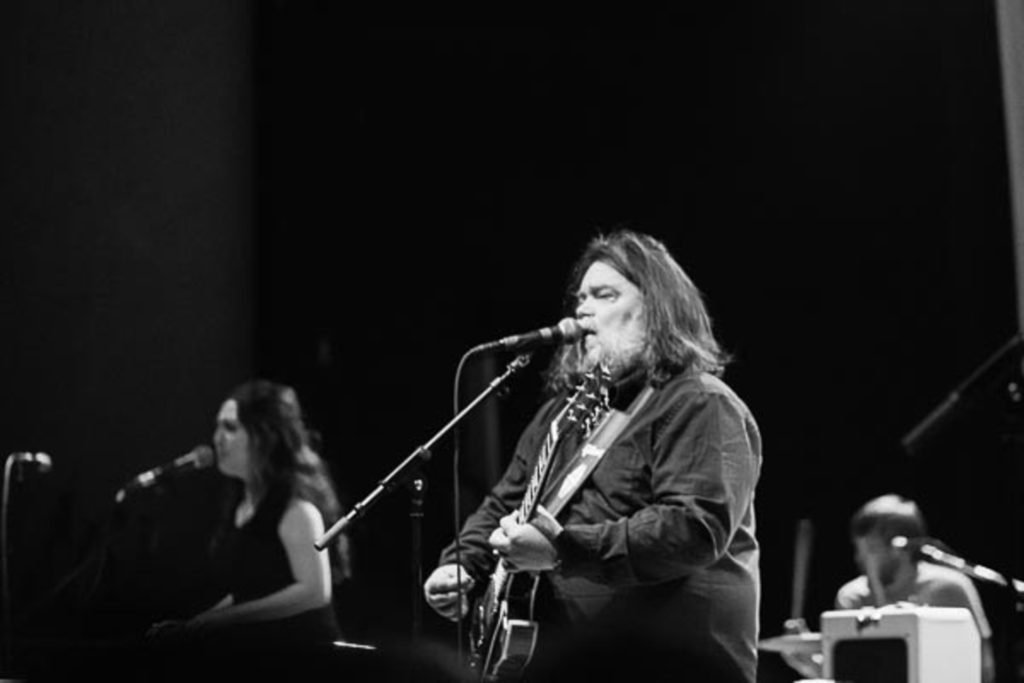 Clearly absent from the stage: the jug, a regular feature on many of the Elevators’ recordings that is used to amplify falsetto vocables and which helped give some of the Elevators’ songs their distinct sound. While watching Roky and the Hounds of Baskerville play a set made mostly of songs from that era of Roky’s career, music nerds might have pondered the reasons for the absence of the jug. Are these reasons purely aesthetic? Like, is this “post-jug” Roky? Or does it have anything to do with Tommy Hall, the guy in the Elevators who played the jug and who fed Roky lots of LSD, kicking off the long and twisted saga of his career? How much would a jug cost, anyway? A little jug here and there could have helped bring some of the songs home, for the warbling, shimmering dimensions it lends. In any case, there was no jug, only affected backing vocals that did some crazy stuff approximating jug. 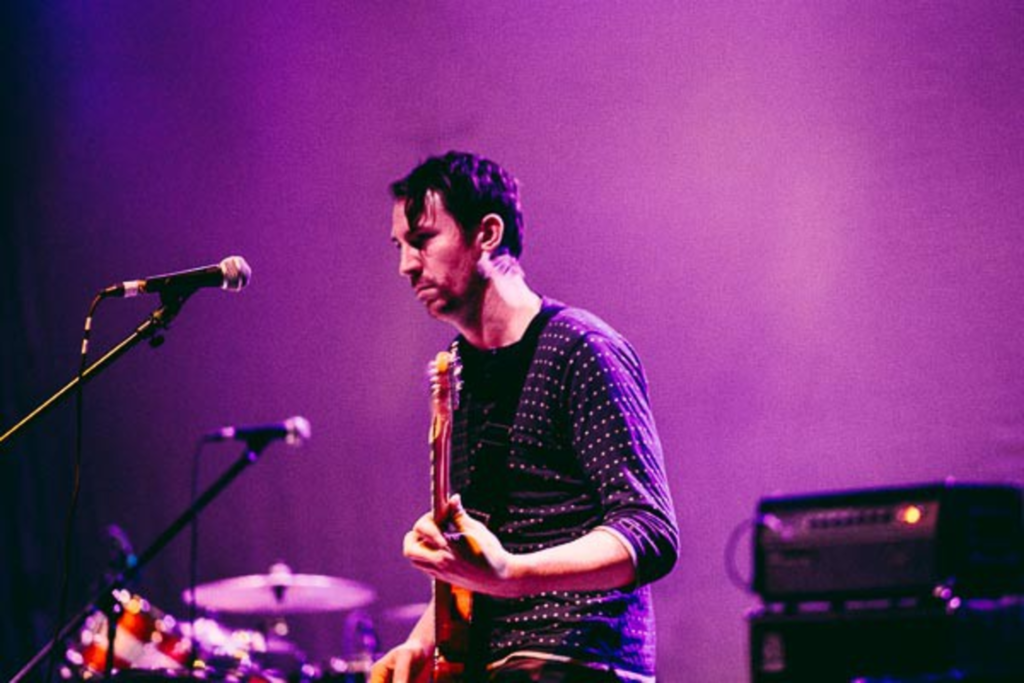 Beyond the picking of these nits, the Hounds of Baskerville played a muscular and tight set and looked like they were having fun. The five-piece kept close the soul of the originals, even as they smoothed them out into shinier pop nuggets, gleaming with a sensibility better suited for mainstream audiences than the countercultural ones of the Elevators’ day.

Despite the energy from every hound of Baskerville, the crowd didn’t really dance except for a few straggling guys here and there, doing wiggly cage-dancer things. Erickson moved little, too, mostly to veer away from stage center to strum the bare bones of the rhythm, which barely sounded as he looked to the other guitar players or offstage. At the ends of songs, as the crowd screamed and clapped, the truest of smiles would cross his face, unless it was a furrowed brow. It was kind of early at that point. People were still warming up.

At a later, more soggy point in the night, the crowd’s attitude charged up as the Black Angels assembled onstage. The next hour or so was a heavy trip through the band’s catalog of moody psychedelic rock, played out against a backdrop of mesmerizing flares of light. The drummer beat heavily on down-tuned drums, while the rhythm guitarist seemed as cool and sweatless as could be. Atari amoebas, sacred geometries, and diagrams of Haley’s comet flitted over the stage. At several points, the Black Angels were projected on themselves, so their bodies and instruments would stretch backward into a disappearing horizon in outer space, their colors inverting or switching entirely. Movement of the patterns seemed at times to move in sync with the crowd’s roars between songs, which was either happy coincidence or proof of some cosmic force at work. 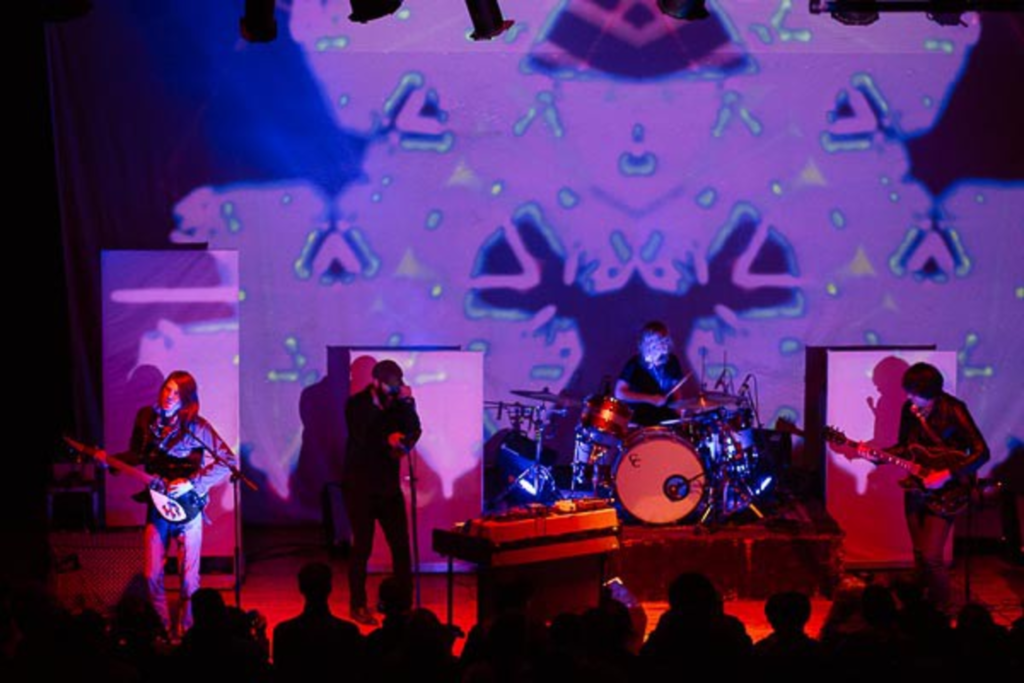 The strength of their playing and the headiness of their lean, droning riffs were most easily observed during “Mission District,” a slow and hard jam of a doomy bent, played with an edge and urgency not quite felt on 2008’s Directions to See a Ghost. As the song’s clawing verse broke open to the heavy chorus, the lead guitarist shook his guitar like a dying lover while white strobes of light and pulses of tremolo-fuzz blasted away. With a simple “ahhh,” singer Alex Maas made easy work of the Granada’s large size with his haunting, distant tenor. 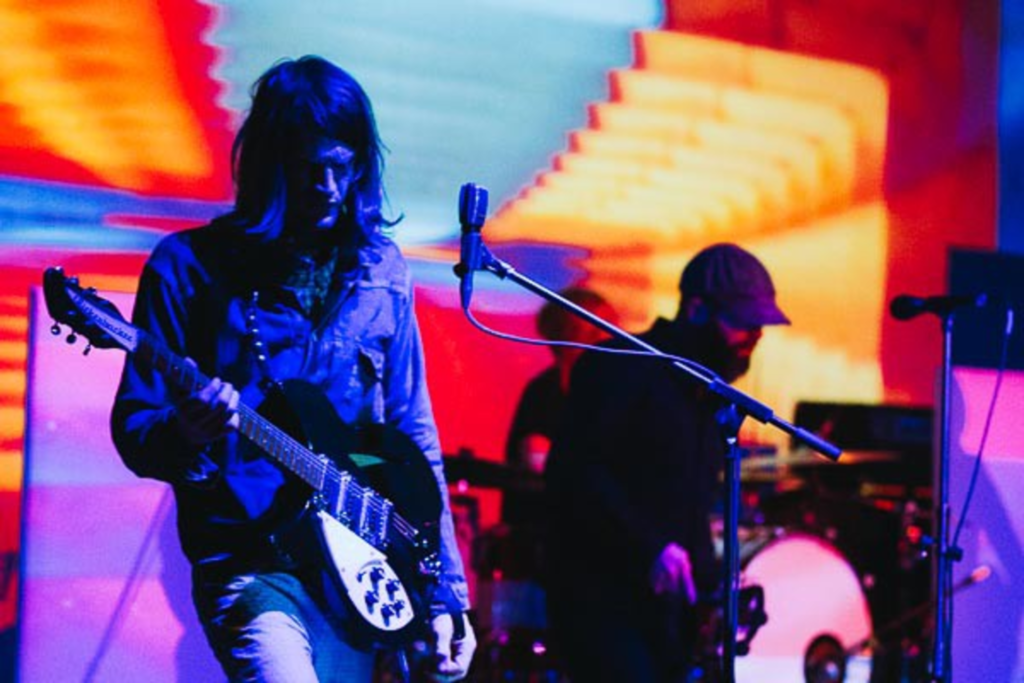 This was the first show of a five-week tour, part of an effort to introduce Roky Erickson to a younger audience. Before the show, waiting in line outside, a 20-year-old said he’d never heard of Erickson but seemed eager to talk about the Black Angels’ most recent release. The flier for the all-ages show said, “Parents Welcome.” Maybe this somehow explains why there was no jug.

But the family-friendly vibe helped underscore a simple moment that played out onstage between Roky and his son, who reconnected with his estranged father in recent years. At one point in the middle of “Splash 1,” Jegar approached the front of the stage, microphone in hand, to stand next to his dad and touch him. Roky Erickson seemed startled by the hand, snapping out from a peaceful refrain of “I’m home, I’m home, I’m home to stay.” Jegar soon made his way to stage right to keep singing the harmony, while Roky went on in the verse: “The neon from your eyes is splashing into mine. They’re so familiar in a way I can’t define.”