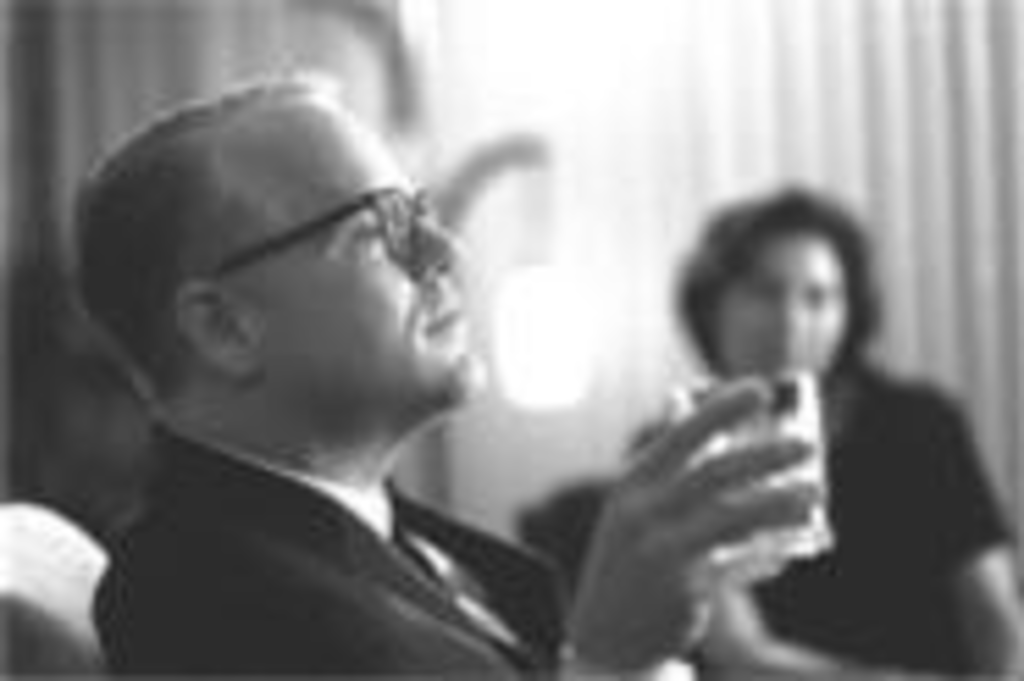 When your movie critics’ tastes range from Jane Austen to Rob Zombie, there’s bound to be some turbulence come awards time. Perhaps not surprisingly, determining the year’s best films is something of an imprecise science here: Our top movie was anything but a unanimous pick among critics Luke Y. Thompson, Melissa Levine, Robert Wilonsky, Bill Gallo and Jean Oppenheimer. This is a group, after all, that could not agree on whether the Deuce Bigalow sequel sucked.

How it works: Each writers assigned a point value to his or her favorite movies of the year. Each film’s points were then added to yield an overall top 10, followed by various attacks on one another’s integrity. Out of our bloodshed come your winners, the top 10 films of 2005.

Many films try to create the sense that the audience is right in the room with the characters, but George Clooney’s docudrama about the real-life conflict between CBS newsman Edward R. Murrow and Sen. Joseph McCarthy is one of the few to succeed. Shot in stunning black-and-white and seamlessly interweaving archival material with original footage, Good Night, and Good Luck makes each viewer a witness to one of the most momentous events in American history. Visually arresting, beautifully acted, intellectually demanding and emotionally powerful, the film doesn’t preach; rather, it lets the facts speak for themselves. Unexpected moments of humor — from darkly ironic to laugh-out-loud funny — enliven the story but never detract from its serious tone. In his sophomore directorial effort, Clooney reveals himself to be one of today’s most socially relevant and dynamic filmmakers.

That Truman Capote, a hyper-urbane Manhattanite with the manner of a self-absorbed princess, could win the trust of the locals in rural Holcomb, Kansas, in 1959, was a social miracle. That the murderous saga that came of his obsession — the “nonfiction novel” In Cold Blood — ruined the writer’s life is a tragedy of several dimensions. Philip Seymour Hoffman gives a thoroughly fascinating performance, capturing everything from Capote’s odd physical traits to his simmering intelligence to the oft-charming, frequently ruthless methods he used to complete the masterpiece that crippled him. Thanks to Hoffman and director Bennett Miller, this rates as the best film ever made about a writer at work.

3. The Squid and the Whale

From its opening line, which pits teenage son and father against preteen son and mother, Squid is a glorious object lesson in family drama. Tightly written and expertly directed by Noah Baumbach, it tells the tale, more or less, of Baumbach’s own difficult and eminently recognizable childhood. Laura Linney and Jeff Daniels are Joan and Bernard Berkman, divorcing parents who enact their anger and self-pitying indulgence on the battlefield otherwise known as their children. Bernard is a floundering professor whose identity hinges on his evaluation of others’ intellectual worth. Joan, a writer just meeting with success, distracts herself from her sorrow and rage with affairs. Their boys take sides and emulate: One opines on books he’s never read; the other smears semen on library books. As life, it’s a royal mess; as art, it’s exquisite: unflinching, hilarious and utterly humane.

A story about racism in Los Angeles — and, by extension, America — is screenwriter Paul Haggis’ directorial debut and one of 2005’s most explosive and emotionally powerful films. An ensemble drama about the ubiquity of bigotry and intolerance, Crash spares nobody: Fear and hatred of “the other” drive everyone, and each victim of racism is also revealed to be a perpetrator. Some of the characters and interlocking stories work better than others, and the film becomes contrived in its final half-hour, but nothing can diminish its overall relevance. Among numerous standout performances (Terrence Howard, Thandie Newton, Don Cheadle), perhaps nobody proves more moving than Matt Dillon, as the cop who is both vile and heroic. “You think you know who you are,” he tells his young partner. “You have no idea.” — Jean Oppenheimer

What could have been sappy and exploitive wound up as the leanest, meanest movie of the year. It’s a searing, funny and begrudgingly poignant doc about quadriplegic rugby players who don’t want your sympathy but would love it if you’d fuckin’ hit them as hard as possible. Imagine Mad Max confined to a wheelchair, with a temper that could melt steel. Mark Zupan, a former college soccer player who wound up in a chair after a night of boozing led to his being tossed into a ditch for 13 hours, is as engaging as any star in any movie. He’s tough and not a little tender: One second he’s begging you to take your best shot before he dishes out his, and the next he’s teaching a fellow traveler how to make the best out of a lousy situation. It’s a sports drama, too, pitting the U.S. quad rugby team against its arch-nemesis, Canada, at the Paralympics in Athens; screw Hoosiers.

6. The Best of Youth

Released in two three-hour parts, Marco Tullio Giordana’s engrossing drama addresses four decades of Italian history — 1966 to the present — as embodied in the lives of two very different brothers, Nicola (Luigi Lo Cascio) and Matteo (Alessio Boni) Carati. Where Nicola is gentle and thoughtful, Matteo’s a seething tempest. The first yearns to be a doctor, the second a cop. These two extremes of temperament from one middle-class family grapple with the currents of late 20th-century Italian life — the Florence floods and Mafia violence, the country’s 1982 World Cup soccer victory and the terror of the Red Brigades. Ranging from Rome to Florence to Palermo, the epic unfolds like a great novel — expansive, generous and profound.

Every frame is a work of art, and every plot development finally reminds us why these prequel films were made in the first place. Episodes I and II were relatively disposable, but Sith, which at last reveals the coming-out of evil Emperor Palpatine (outstanding Ian McDiarmid), is essential — a buddy action comedy that gradually tosses all its heroes into hell. Some griped about the romantic dialogue, but try transcribing your own sweet nothings to a significant other and see if they’re any more eloquent. Yes, it’s lame to die of a broken heart, but it’s not every day that your true love turns into the most iconic villain in film history. If you have any love for Star Wars at all, there’s no way to dismiss Sith.

Terrence Malick’s two-and-a-half-hour retelling of the Pocahontas story isn’t one of those long movies that feels short — coming out of it, you’ll know you’ve been hit with an epic. But unlike Malick’s nearly incomprehensible The Thin Red Line, The New World is consistently beautiful and involving (and a technical masterpiece, having been shot using mainly natural light). Some say September 11 was the day America lost its innocence, but Malick traces it back considerably further, via the heartbreaking transformation of free-spirited Pocahontas (teenager Q’Orianka Kilcher, in a stunning performance) into the Anglicized puritan “Rebecca” after she believes her one true love, John Smith (Colin Farrell), is lost to her. Parallels to larger themes abound, but what’s most important is that someone finally reclaimed this story from Disney and did it right.

Those who bemoan Stephen Gaghan’s multitiered drama about the oil biz — about those who drill for it and those who get drilled for it — as being too convoluted miss the point; it’s less about connections made than deals undone. And those who dismiss it as lefty propaganda bereft of warmth and humanity do so at their own peril; it’s entertaining as much as it is enlightening, and half the fun comes from piecing together this grim puzzle. It’s a thriller first, one in which the closest we come to a hero is a disgraced C.I.A. agent (George Clooney, using his star power for good more and more every day), and the closest we have to a villain is a terrorist for whom we feel nothing but sympathy. Everyone else, from the lawyer proffering “the illusion of due diligence” to the energy analyst who sells his soul to pour fresh crude to government and petrochemical flunkies, falls in that gray area separating the damned from the doomed.

With its impeccable script, finely tuned acting and astonishing emotional integrity, Look at Me deserves far more attention than it received. Lolita (Marilou Berry) is 20 years old and, in the words of her father, “anger on wheels.” She has cause: Said father is the famous writer-publisher Etienne Cassard (Jean-Pierre Bacri), an insufferable narcissist. Also, Lolita is overweight, and nearly everyone who befriends her does so only to get to her father. Sylvie (played by director Agnès Jaoui), Lolita’s voice teacher, is guilty of same. Such is the impetus for herding a whole flock of characters into a single pen, including Sébastien (Keine Bouhiza), the boy who likes Lolita as she is. Look at Me accomplishes what art is meant to do: It shines a penetrating, intelligent light on a swath of living, breathing humanity. And in so doing, it shows us who we are.