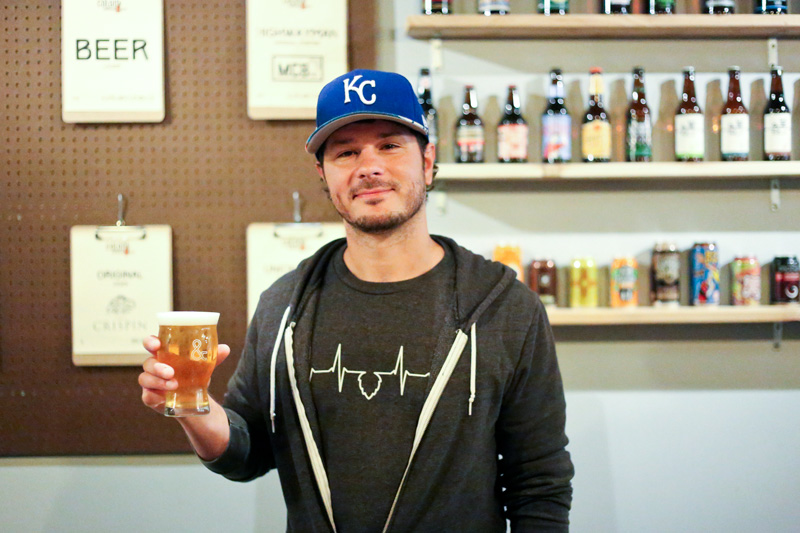 Rodney Beagle’s beer is coming to Colony Espresso and Beer — it’s just going to take a little while.

The North Kansas City coffee shop and bar is in the beginning stages of filing the necessary paperwork, but Beagle — a homebrewer who spent time learning to brew at Big Rip Brewing Co. — says he expects to have a Brewer’s Notice by the end of the year. The plan is to buy Rock & Run Brewery’s one-and-a-half-barrel system when the Liberty brewery upgrades to a three-barrel system in four months.

“The timelines match up perfectly,” Beagle says. “I don’t want to call it coincidence. It’s more like fate.”

Beagle anticipates beginning to brew in February or March. After that, he’ll follow what he calls the “Crane model” and take his brews to every festival to spread the Colony name.

Colony owner Drew Cobb confirms that the brewery will be built where one of two bathrooms now exists. There will be a window, so you can watch Beagle work. He plans to do two batches a day, with three Colony-brewed beers on tap at all times (and maybe a Crowler for 32-ounce to-go cans).
“I’ve kinda just been taking my favorite ideas from different places and incorporating them into our spot,” Beagle says. “Our goal is to serve the town of North Kansas City first and foremost, and cater to the clientele from the river to the hill.”

Beagle says he likes to brew fruit beers and revive historic styles rather than sticking to the usual suspects. “I promise you we will never have a pale ale, a brown ale, a stout and a wheat beer on tap,” he explains. “We’re never going to do that. We’re going to do fun, inventive beers that you want to go try that sparks interest. Instead of doing a pale ale, we’ll do a pale ale with lime zest and raspberry, kind of like the Cloud Nine from 4 Hands. Something weird that works.”

This year’s KC Nanobrew Festival was Beagle’s last under the Beagle Brewing moniker.

“I represent Colony Handcrafted Ales from here on out,” he says. “We’re not in it to get rich. We’re in it to drink beer. I can say that I’ll be doing this until the day that I die. I want to make beer because it makes people happy.”

The annual Ripper Halloween costume party at Big Rip Brewing Co. (216 East Ninth Avenue, North Kansas City) is set for Saturday, October 29, from 7 p.m. to midnight. It’s open bar (beer, wine and liquor), and you get dinner from Helen’s on Wheels, music, games and more for your $60 ticket.

The guys at Screenland have announced the dates for their not-to-be-missed beer fest: Friday, December 2, through Sunday, December 4. Look for more beers, movies, music and art in year No. 4. Tickets are on sale now.

Kansas City Craft Beer Week is shaping up to be amazing. It starts Sunday with a 4 Hands Stout Week beer dinner. It continues through Friday. Look at this lineup:

Torn Label’s next draft and bottle release is here: Rod & Todd (the sons of Maude, you know, Flanders on The Simpsons), a Flanders-style red ale aged in Amigoni wine barrels. It is delicious.

Carve a pumpkin at Green Room

Green Room Burgers and Beer’s annual pumpkin-carving party is set for Wednesday, October 26, from 6 to 10 p.m. at the brewery (4010 Pennsylvania). Pumpkins provided.

New beers from Manhattan’s Tallgrass Brewing Co. are coming to stores soon. Backpacker Brown, a hoppy brown ale, joins the year-round lineup. But the more intriguing release is Idaho 7 IPA, the first in the brewery’s Single Hop IPA Series. Idaho 7 features hops from the Jackson Hop Farm in Wilder, Idaho. Get it from September through December.

Beer Tasting Kansas City bottle share, cookout and camp out starts at noon at Smithville Lake, shelter No. 9. You don’t have to camp out to share beers.

Free State Brewing hosts an open house at its eastside brewery (1923 Moodie Road, Lawrence) from noon to 4 p.m. Old Fangled will be there playing music and there will be food, drink and dogs. Yes, dogs. There will be pups there from the Lawrence Humane Society that are in need of forever homes. Sample a beer, take a dog home.

Wednesday, October 5
Get a John Lennon glass at the Flying Saucer (101 East 13th Street) tonight at 6.

Saturday, October 8
Botanical Brewfest at at the Overland Park Arboretum (8909 West 179th Street, Overland Park) from 4 to 8 p.m.
Leinenkugel’s is bringing Oktoberfest to the Power & Light District from 11 a.m. to 11 p.m. It’s $10 to get in, and there will be wiener dog races.

BD’s Mongolian Grill (19750 East Valley View Parkway, Independence) is hosting a Samuel Adams stein-hoisting contest from 6 to 8 p.m. This is an official qualifier with the winner getting a chance to go to Las Vegas and maybe on to Munich. On tap: 2015 KMF.

It’s a Ballast Point hump-day fundraiser for Spay and Neuter KC at Bier Station from 11 a.m. to 11 p.m. On tap: Longfin Lager and more.