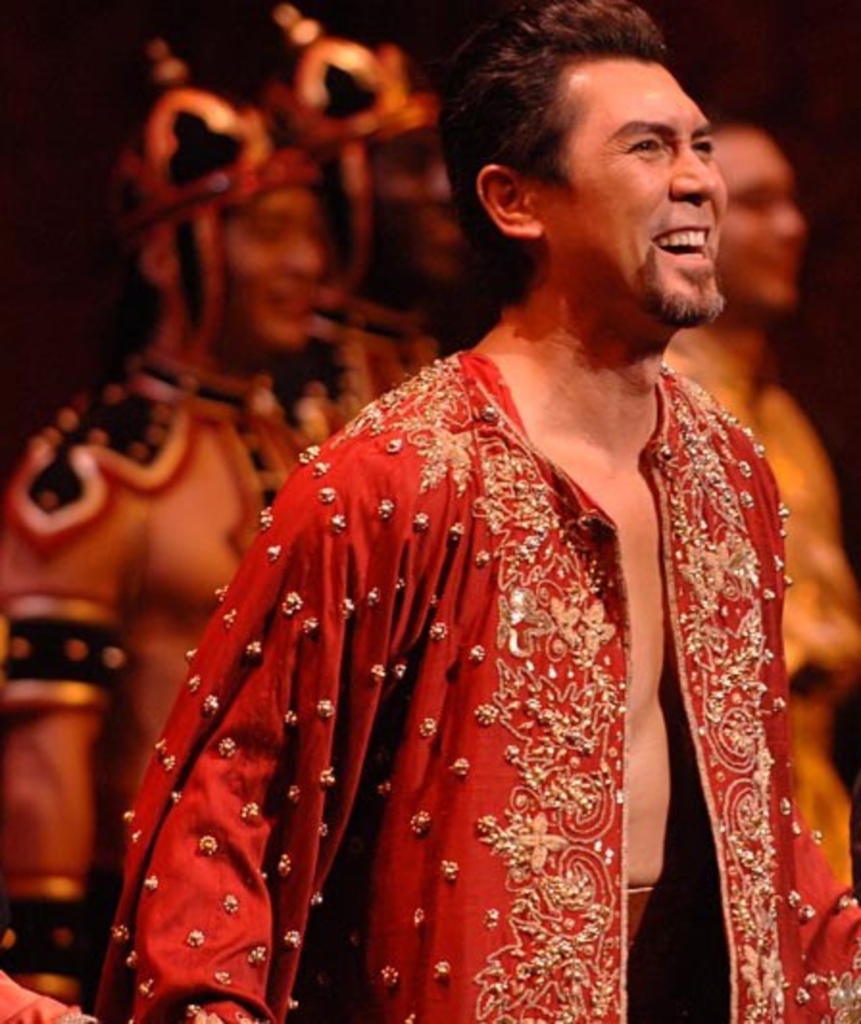 For the modern audience, The King and I presents dizzying, sometimes troubling layers of cultural appropriation and translation. We’re talking about a musical written by two white men (Rodgers & Hammerstein), based on an account by an English woman (Anna Leonowens) who claimed to have helped civilize a barbaric, uneducated foreign monarch (Mongkut, of Siam – the country known today as Thailand) and save his kingdom from encroachment by the British Empire.

Things gets especially tangled in the second act, in which the young Burmese captive Tuptim, enslaved to the
Siamese king, tells her version of Harriet Beecher Stowe’s Uncle Tom’s Cabin. That novel is, of course, a white woman’s imagined account of a black man’s slave experience. Written in support of the Abolitionist cause (the American Civil War was raging during the time of The King and I), Uncle Tom’s Cabin was at one point second in sales only to the Bible. Adding to the complexity is the fact that the novel has often been criticized for what are considered condescending depictions of black characters, and the phrase “Uncle Tom” has long been a pejorative in our cultural lexicon. When the whole thing is presented in the traditional theatrical language of Southeast Asia and interpreted through the experience of an enslaved woman, it’s all the more convoluted.

So what a triumph to see Starlight Theatre’s version of the scene play as a stunning moment of pure theatrical power. It’s worth getting to Starlight this week for this set piece alone. But it is but one jewel in a dazzling and very enjoyable production.

When I was a kid and a show came to town that was set in an Asian culture or milieu (South Pacific, The Mikado, etc., etc.), we always went — but in trepidation, not knowing what we’d be in for. On the one hand there was the thrilling possibility of seeing an actual Asian face onstage. On the other hand, there was the awful probability that the Asian characters and their interactions with white characters might be humiliatingly portrayed.

That was then; this is now. There is nothing to offend and much to delight in this production. It helps that the director and choreographer is Susan Kikuchi, former director of the Martha Graham dance ensemble and school. Her Japanese-American background has perhaps given her some sensitivity when negotiating this racial and cultural land mine of an American classic.

Kikuchi starts with the right casting. The preponderance of talented Asian actors onstage is not something one sees very often, in Kansas City or elsewhere. For me, it was a thrill, and I was delighted that I’d taken my daughter. Broadway veteran Ann Sanders brings great complexity to her role as favored wife Lady Thiang, especially in the wistful solo “There Is a Happy Land.” Diane­ Phelan and Joshua Dela Cruz (both appropriately Southeast Asian in background) create a touching story for the young lovers Tuptim and Lun Tha and deliver some of the most gorgeous musical numbers of the night. Phelan especially possesses a phenomenal voice, with subtle, brilliant coloratura. Raul Aranas’ fearsome Kralahome couldn’t be onstage enough for me. Even the children are fresh and charming, their scenes enhancements rather than ordeals.

Lou Diamond Phillips is a musical performer in the Rex Harrison mold, so masterful in his delivery and impeccable in his timing that any fault of tunefulness hardly registers. His king is imperious and charismatic but also humorous and human. He has performed this role for well over a decade, and he was nominated for a Tony for the 1996 Broadway revival. Yet he remains freshly committed and reactive in every moment and brings out the best in his co-stars.

Phillips has a worthy Anna in the talented Rachel Bay Jones. Her Anna is modern and ener­getic, sensible and brave, with a lively sense of play and a ready heart. With her sweet-toned soprano and emotional intelligence, the lovely Jones glows in her signature numbers. Her “Whistle a Happy Tune” is the true beginning of the show, and both versions of “Hello, Young
Lovers” are transcendent. “Shall We Dance” is, of course, the crowd-pleaser, and Phillips and Jones make it a dreamily romantic climax. But I adored her funny and unhinged version of the feminist rant “Shall I Tell You What I Think of You?”

As fine as the performances were, Robert Fletcher’s sumptuous, elaborate costumes and Kenneth Foy’s sets by themselves stole scenes. It is all properly splendorous. When the evening breezes flutter through, the crescent moon beams gold, fireflies sparkle onstage beside the dancers in their bejeweled costumes, and the orchestra strikes up Richard Rodgers’ entrancing melodies, is there anywhere better to be than Starlight Theatre on a summer night?