Gene DeClue didn’t realize his world was about to fall down.

As
DeClue brewed Beach Blonde pale ale inside Rock & Run Brewery’s
brewhouse, the 130-year-old Bedinger Building, which shares a wall with
the brewery, collapsed into a pile of rubble on Tuesday, May 3.

“I heard this low brrrrrrrrrrr,” DeClue says. “It sounded like they were core drilling something or cutting something.”

DeClue
stuck his head out the brewery’s door and glanced toward the street.
The red Pitch newspaper box and a pile of brick had been toppled.
Then a cloud of dust came through the porous shared wall. DeClue’s first
thought was that the workers renovating the neighboring building had
knocked over scaffolding.

“I come out the middle door and I saw the whole building down,” DeClue says.

Inside
Rock & Run were a couple of kitchen staffers and the general
manager. DeClue yelled at them to get out. “I ran into the brewery, hit
the stop button on the brewhouse, grabbed my laptop and ran,” he
recalls. “By the time I got out, there was a cloud of dust rolling
through the street. Half of city hall is out watching. There was nobody
hurt. Not a soul was injured.”

Rock & Run was shuttered as the engineers tried to figure out if the shared wall was structurally sound.

“Literally
within 48 hours, they came in and did this,” DeClue says, pointing to
the supports reinforcing the wall and ceiling. “What you see down here,
they did upstairs as well. So it’s all duplicated up there, but they
tore out probably half of the office in order to do it. And they tore
out a good half of the brewhouse.”

A month later, DeClue walks
through Rock & Run’s original space. It’s nothing more than storage
while he and his business partner, Dan Hatcher, await the results of an
engineering report.

“It’s cluttered, it’s dirty, it’s dusty, but there’s
no damage,” DeClue says. “Nothing got damaged other than what they
brought in to make sure that we weren’t going to get damaged.

DeClue doesn’t expect Rock & Run to reopen its
original space for several months. In the meantime, it has moved next
door, into the space formerly occupied by the Bell, at 114 East Kansas
Street, in Liberty. That venue closed last November.

“Temporarily, we’re over there,” DeClue says. “And then permanently, we’re looking at a long-term lease to stay over there.” 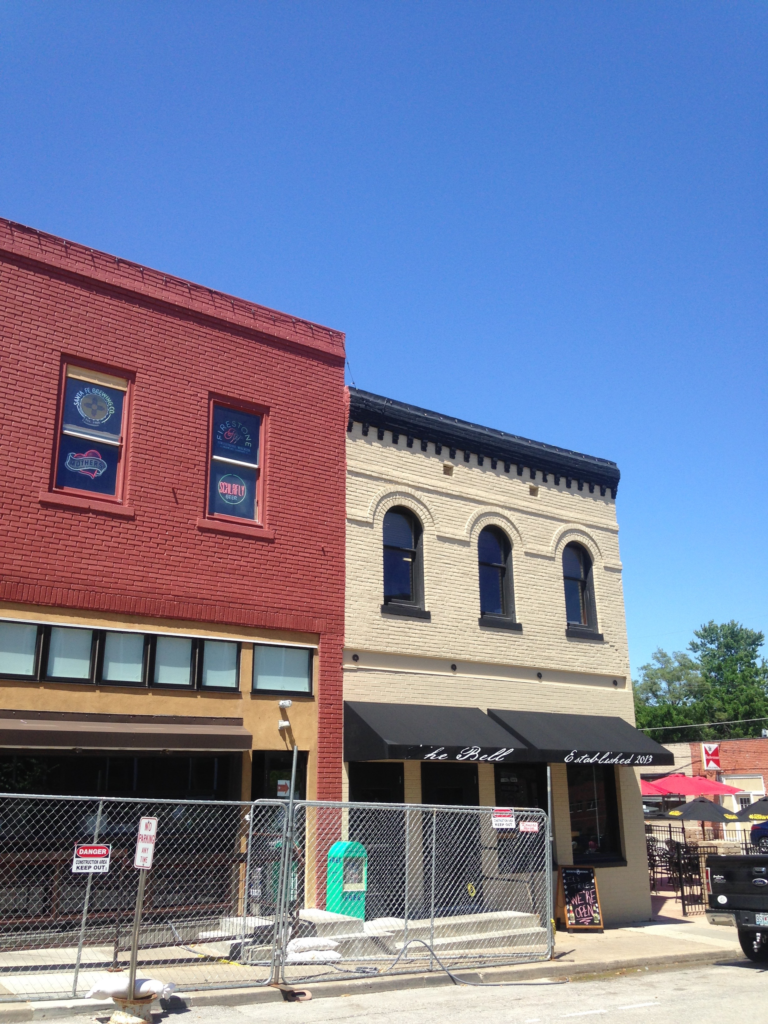 Rock
& Run has already done a quick renovation, running beer taps to the
bar, replacing the bar top, and getting DirecTV and Sirius XM
installed.

“What we’re doing over there is exactly what we did over
here,” DeClue says. “Just a different location. The Bell is gone. There
is no more Bell. This is Rock & Run.”

More moves are on the way,
including Rock & Run decals for the windows and awning as well as
patio umbrellas. And once Rock & Run is back brewing and the old
location is operational, more renovations will commence, including
turning the inside of the Bell space into a private dining room, putting
an event space upstairs, and adding an outdoor bar cabana for the
70-seat patio. 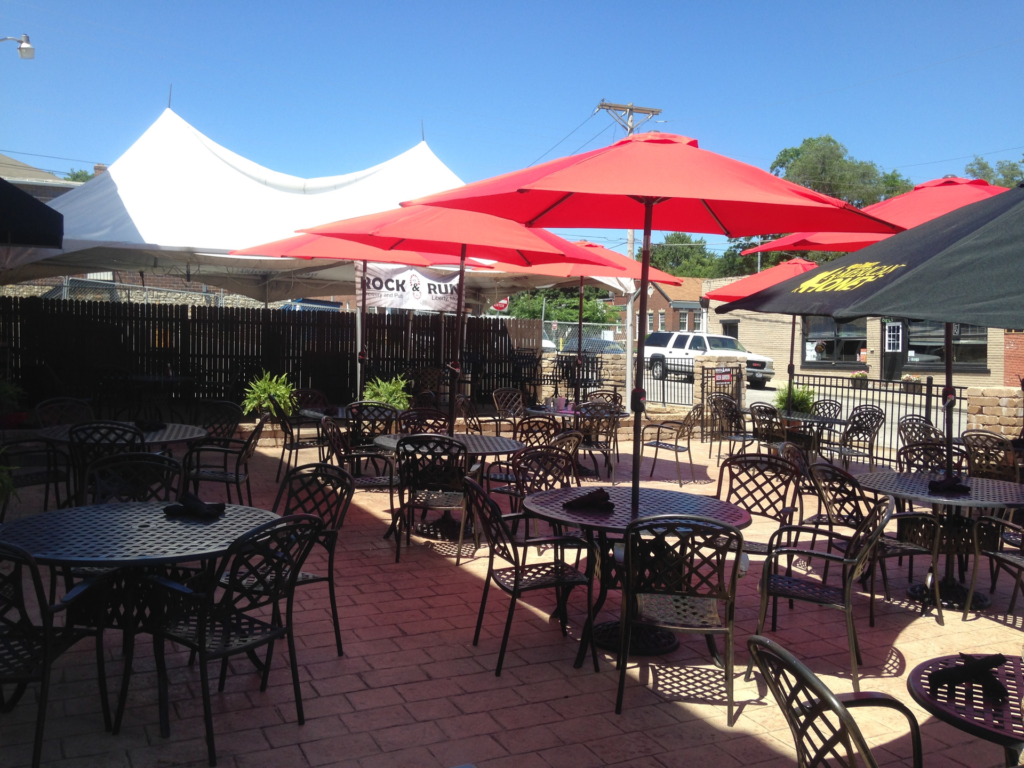 DeClue is still hopeful that his brewhouse will be operational again in a couple of weeks.

That’s an issue, because Rock & Run beer is still the top seller in the new space.

“I’m
still selling two-to-one, and sometimes three-to-one, our beer to
commercial beer, but I am just watching the quantities go down,” DeClue
says.

Still, there is Rock & Run beer coming. The brewery is
collaborating with Martin City Brewing Co. to make the popular
Beach Blonde pale ale — the beer DeClue was brewing at the time of the
building collapse.

“That would be a really good bridge for us,” DeClue says. “That would give us another 15 kegs of our stuff.”

More
is a key concept for DeClue. Ten minutes away, Rock & Run’s owners
plan to open a 15-barrel production facility in downtown Kearney. The
idea is to brew all of Rock & Run’s flagship beers there on a
15-barrel system.

“The building itself will house the full brewhouse
and fermentation and everything, plus quality lab, offices, a small
taproom inside the building and a biergarten outside,” he says. “We have
drawn up plans for barrel aging and sour production as well.”

The
production brewery has been the worst-kept secret in Kearney. Rock &
Run had already maxed out its production capabilities when DeClue and
Hatcher attended last year’s Craft Beer Conference. They began tossing
out ideas for growing the business on the plane ride home.

Hatcher
already owned land in Kearney, but getting basic services there proved
to be too costly (hundreds of thousands of dollars). They shifted their
focus to closer to home — in the neighboring Bedinger Building, which
was under construction. A handshake deal was struck to do the production
facility there. Two weeks before the collapse, Hatcher received a text
message from a real-estate agent in Kearney saying she’d found a
commercial property that met their zoning needs. DeClue and Hatcher
visited and made an offer, which was accepted. 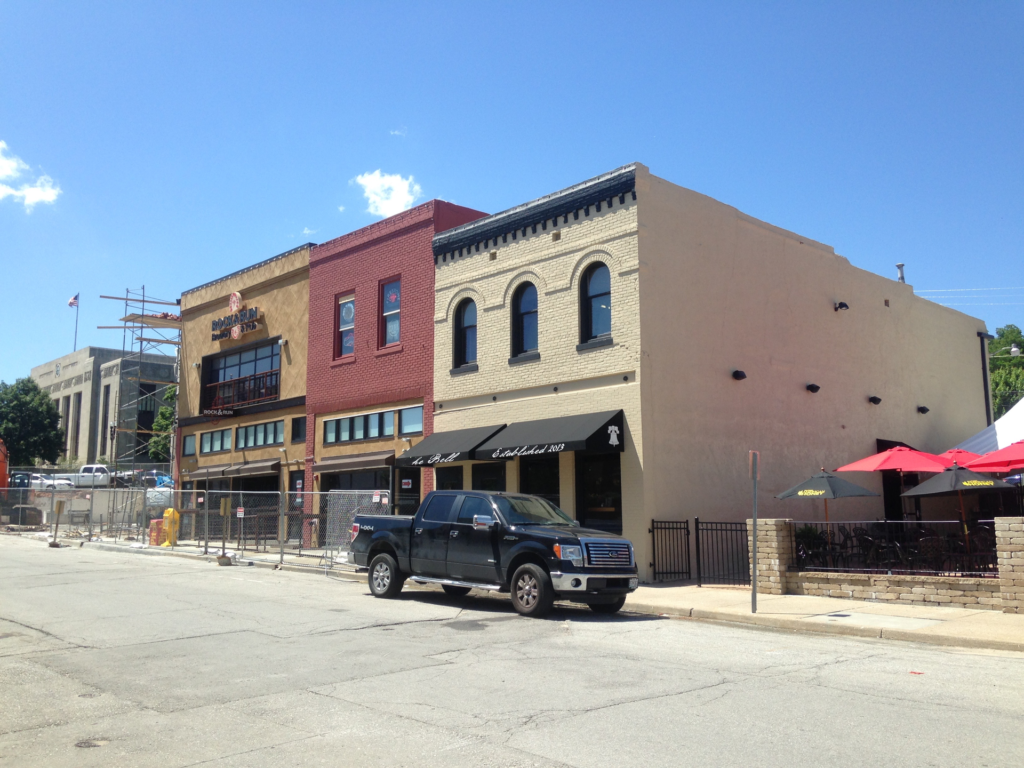 When the original Rock
& Run opens, months from now, it’ll operate with a three-barrel
system for one-off beers, seasonals and pilot brews.

“We want to make
sure we test batch on the three-barrel and it translates identically to
the 15-barrel, so that’ll happen probably concurrently as we do the
build up there,” DeClue says.

DeClue adds that this is a move toward distribution — initially in kegs and bomber bottles, with cans to follow.

“We
had planned to have the 15-barrel up and running by September,
October,” DeClue says. “I literally planned on having the first beer out
of there by October. If I get it halfway constructed by October, I’ll
be stoked. I’d love to say by the end of the year, but name me one
brewer in town that’s hit his deadline for construction.”