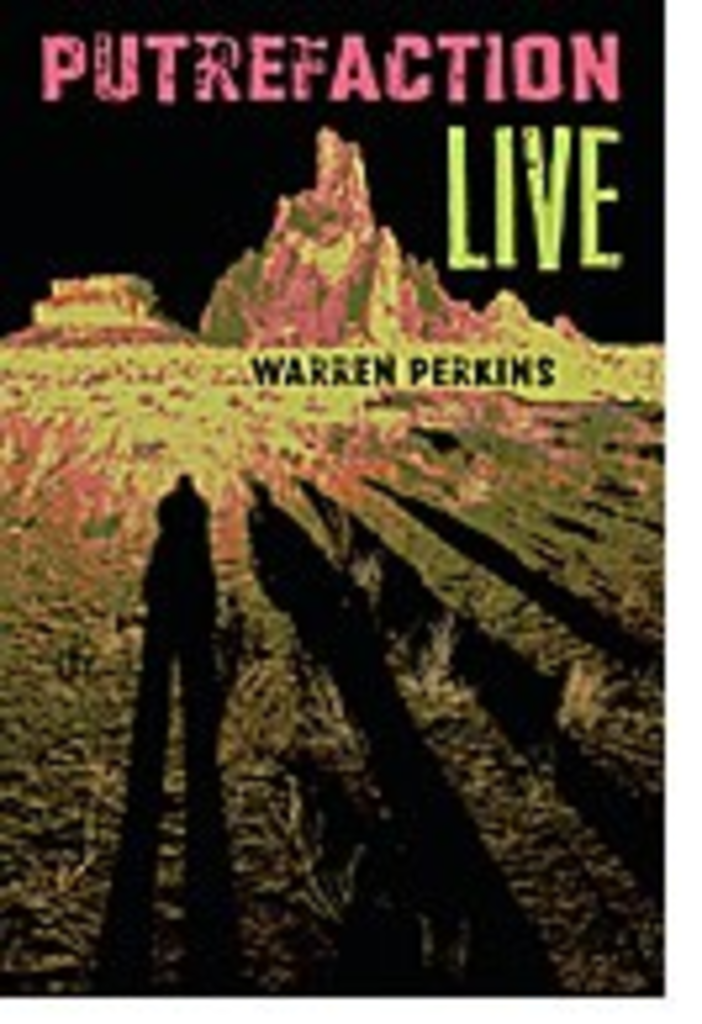 Warren Perkins‘ Putrefaction Live is, at its heart, a prodigal son story. James Claw returns to the Navajo reservation where he grew up, leaving Flagstaff behind.

Rather than being a straight novel with the usual problem, rising action, resolution plot structure, Perkins’ novel takes the form of a slice-of-life tale. Claw’s story is intercut with the tales of the various side characters in Putrefaction Live. Those side stories include that of Angie, a mother of two whose husband is in the military and never around, Ray’s father, and assorted others.

These interstitials bring to mind Steinbeck’s The Grapes of Wrath, wherein the story of the Joad family was split up with tales of migrant life and economic hardship. The interludes both inform the reader, helping to set the novel’s tone, and at the same time making characters that would otherwise appear caricatures seem more rounded.

Metal in the novel — specifically, Putrefaction, the band Claw joins — is presented rather sympathetically. It’s the metal of grindcore, not the metal hair bands and leather pants. Bands like Crytopsy, Napalm Death, and Cephalic Carnage are all the touchstones of what Perkins wants you to hear when he presents a song about Indian water rights called “Dry Genocide” with the lyrics “Thirst! Die of thirst, savages! The sun will bleach your bones!”

It’s amazing that Perkins can bring a concert to life so expertly, with descriptions such as this one:

Before them was a moving mass of hair, a sea of bobbing bodies obeying the beat they were providing, like worshipers of the metal priests they must be.

Descriptions such as those stay with the reader, but that is the downfall of Putrefaction Live. The book is almost nothing but character studies and set pieces, and the issues introduced seem to melt away with little plot development as to their resolution. The novel is a swift read, and an enjoyable one, but everything happens out of sight, with little in the latter half of the novel to call a plot.

You can purchase the novel from the University of New Mexico Press.