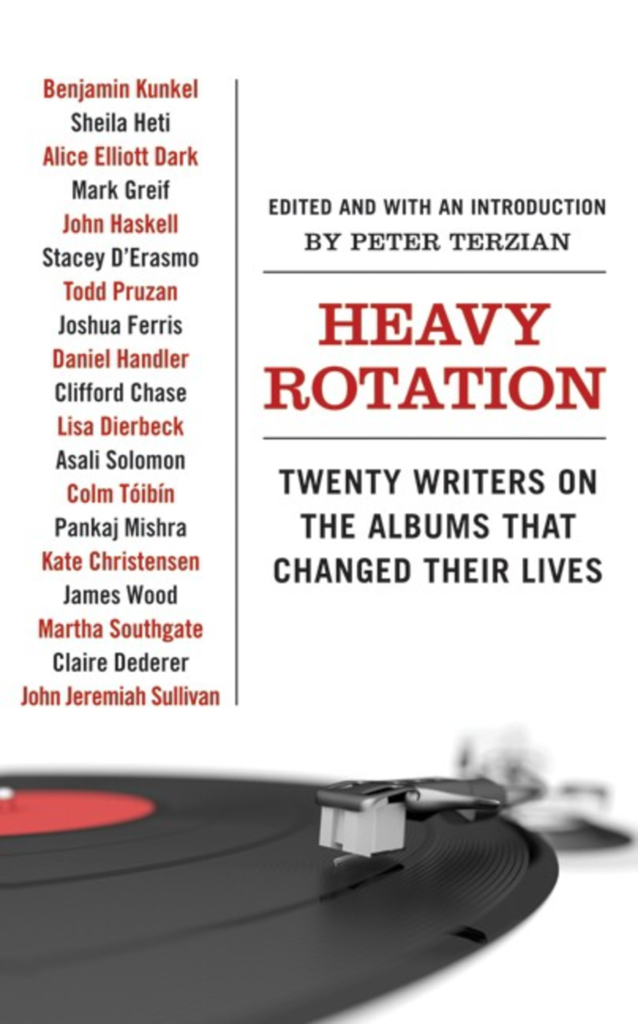 The anthology Heavy Rotation: Twenty Writers On the Albums That Changed Their Lives, edited by Peter Terzian, manages to get past the fanboy screeds that usually populate “life-changing” lists. Heavy Rotation‘s writers avoid the idea of “life-changing” as “life-affirming.” At certain points, the albums soundtrack some truly awful incidents in the lives of the writers.

Daniel Handler, so far as I can read, seems to hate the Eurhythmics’ Savage. The B-52s rock the turntable as Clifford Chase discovers that he might not like girls as much as he thinks. The way Annie — and through it, “Tomorrow” — scars Sheila Huti is something awful:

I’ve never been able to shake the sense that, while it might appear that, for instance, the White Stripes are performing in a grand stadium to a crowd of screaming fans, in reality they’re on some crummy set before some folding chairs in a concrete warehouse in Kitchener-Waterloo.

Heavy Rotation, however, for all its well-worded insights on music, is one of those books that I couldn’t get through all the way. I read my way through the albums with which I was familiar, of course, as well as records with which I had a passing interest. I couldn’t help but wonder how a Gloria Estefan could change the life of someone, and Asali Solomon presented a heartbreaking tale of being treated poorly for being black, in the land where she thought she’d fit right in.

But for every Solomon and Chase, there are two or three more authors who present a hipster-y, privelidged view of music that just grates on the nerves. Joshua Ferris’ “Elegy For A Discarded Album,” to Pearl Jam’s Ten, tries to tell the story of discovering an album, and thinking you’re the only one who knows about it, only to have it become ridiculously popular. What it ends up being is whiny:

I felt a loss when Ten became popular, a loss the nature of which I’ve struggled to articulate, in part because I think it must be a silly feeling, though no less genuine for that.

Heavy Rotation is a noble effort, but it’s ultimately not interesting enough to merit more than a pass-through read.