Robert and Shana ParkeHarrison moralize at the Nelson-Atkins 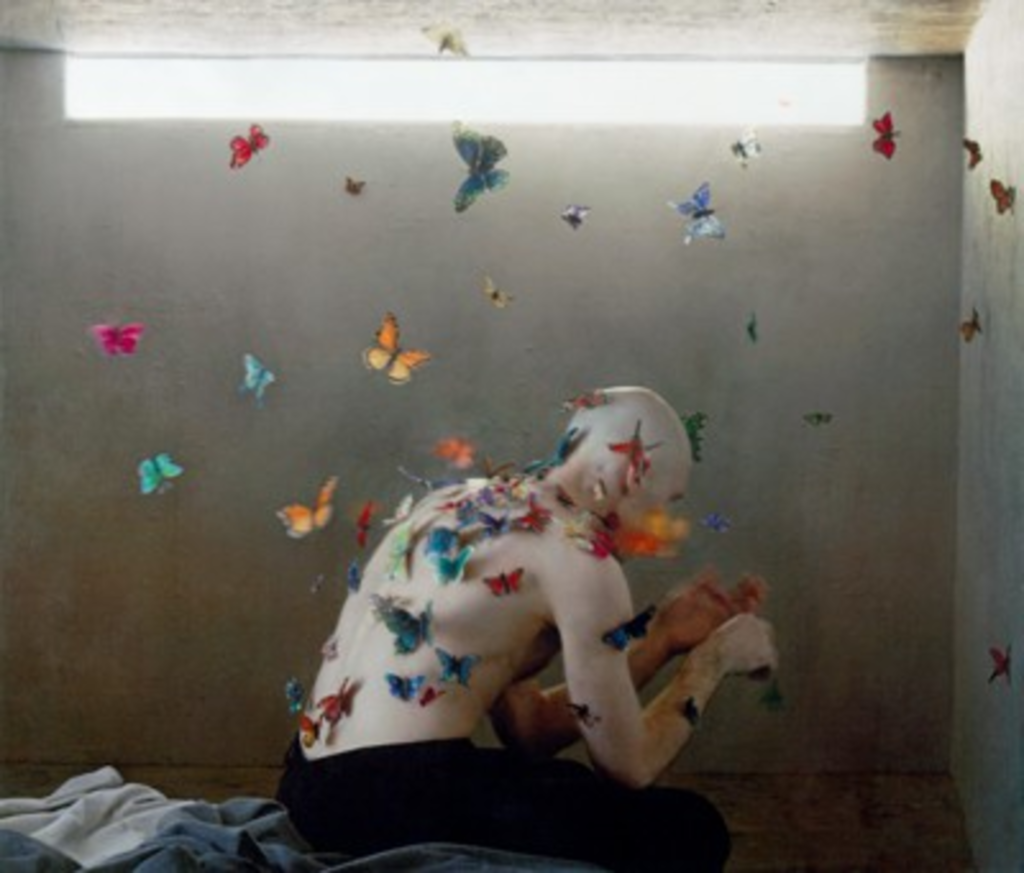 The exertions of Robert and Shana ParkeHarrison gnaw me to the bone. After the crack photographic exhibitions that have dominated the Nelson-Atkins’ schedule, I was hopeful that the pair’s Restoration might change my negative feelings about their work. But it only hardened my resolve — the parlor trickery of these photos hints at cheap thrills but fails to deliver even a shiver of excitement. These 15 images, representing five different series and culled from the Nelson’s collection, don’t come close to the quality and depth of the rest of the museum’s exceptional photographic holdings. Perhaps Robert ParkeHarrison’s B.F.A. from the Kansas City Art Institute explains their inclusion.

In these deliberately precious and overwrought images, Robert is the sole character, making them essentially self-portraits. He plays “Everyman” (his word) and dresses in a shabby suit, explaining in the exhibition’s brochure, “People can associate with this character because he’s not heroic. He’s slightly failing. Maybe when we see someone like this who isn’t idealized and is sort of sad, we identify.”

Not so fast, mister. First, don’t assume that you know what a viewer feels — or sees. Second, this Everyman isn’t failing but is wildly successful, the star of the pictured productions that center on him and his theatrical “work” (not that these are documentary images — far from it).

Restoration is loosely organized around a set of arch themes — healing a broken planet, human isolation, etc. — that are in turn burdened with lofty titles, such as “Promiseland.” In most of these photos, “Everyman” attempts to mend an ailing Earth through gimmickry. For instance, he might work a jury-rigged disc plow to till the soil or wield a giant wrench to tighten bolts underneath the bedrock. In “Pollination” a miniaturized Everyman shimmies up the stalk of a dandelion and pretends to blow the monster-sized seedlings into the air. Rendered in dreamy tones, the images mean to impose an otherworldly appeal. Some are in sepia, others are products of the laborious process of photogravure with beeswax, and a few return to the mixed-media cutting and pasting of the ParkeHarrisons’ early work.

The 1999-2000 “Earth Elegy” series shows Everyman with an enormous book, in which he is pressing plants. Likewise in the “Passage” series, our Everyman toils with more overgrown tools that don’t work. His Lilliputian self in relation to the oversized land underlines the futility of his “work.”

The last series, “Grey Dawn,” allows Everyman to finally change his clothes (or remove them) as he sits, isolated, in creepy interiors. His back is to us in “Mourning Cloak,” while around him in the plain chamber, beautifully colored butterflies flutter around him and light on his back.

These browbeating set pieces never transcend their patronizing affectations. But what’s the point of the ParkeHarrisons’ thick self-righteousness? Few and far between are the folks who seek out morality lessons on museum walls. That’s what church is for.