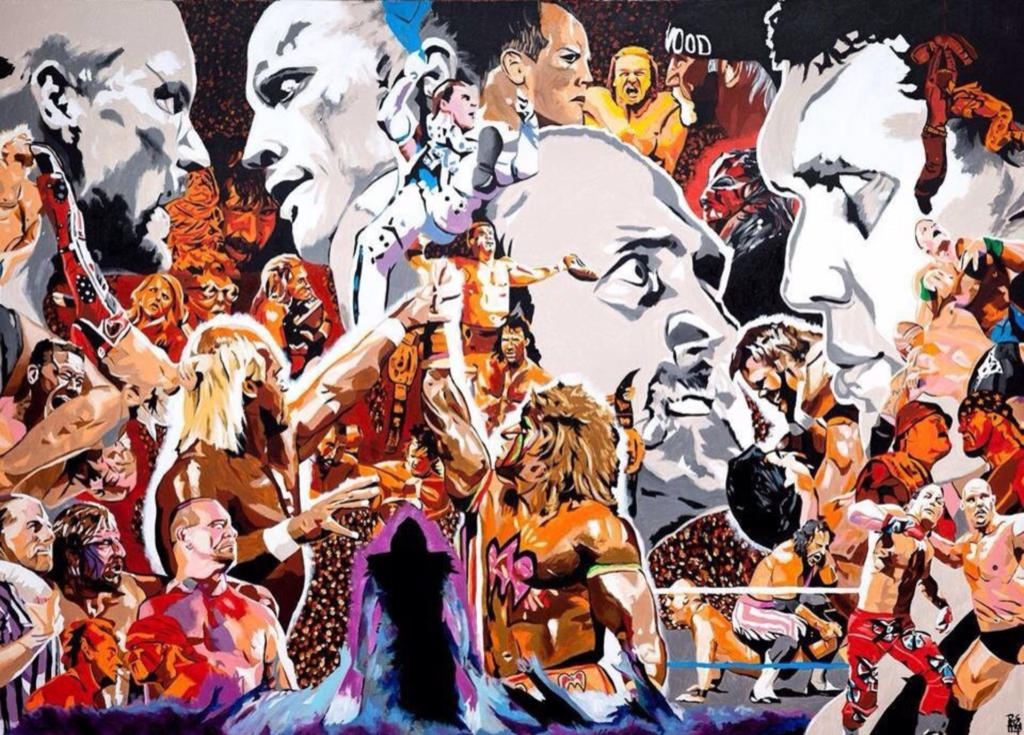 Monday night’s edition of Raw at the Sprint Center is shaping up to be a big night for WWE. Hulk Hogan is advertised to make his first appearance in Kansas City in more than a decade. “Nature Boy” Ric Flair is also rumored to be walking that aisle. John Cena and Dean Ambrose are scheduled to for combat against Seth Rollins, Randy Orton and Kane in a street fight. And Triple H has promised to bring Hell in a Cell — a 20-foot, five-ton steel cage — to the Sprint Center.

But before that all goes down live on the USA Network, Kansas City-based artist Rob Schamberger will be outside the Sprint Center painting a new portrait of WCW legend Sting. He’ll be set up next to a merchandise trailer around 3 p.m.

In April 2012, The Pitch profiled Schamberger, who was on a quest to paint every world champion wrestler. Since then, Schamberger’s wrestling art has taken him across the United States. Near the end of 2013, he started officially working with WWE. He painted the mural above live from WWE Axxess, the wrestling organization’s fan festival during WrestleMania weekend, in New Orleans. And he watched the Super Bowl of professional wrestling from the private box of the Ultimate Warrior in the Super Dome.

“Getting the star treatment at WrestleMania was awesome,” Schamberger says. “Painting live at Axxess was a huge undertaking — 20-hour days for four or five days straight and more napping than sleeping — but it was tremendous exposure, so I wanted to be there from opening to close so I didn’t miss anything.”

Schamberger says his first taste of how his life has changed came during that weekend.

“I went down to the lobby to get a pizza that I had ordered, and there were fans down there because it was the WrestleCon [another wrestling convention] hotel, and they started bowing to me. I almost went into Wayne’s World mode. Oh, you’re worthy. You’re worthy. Which one of you has my pizza?”

Schamberger says visiting the WWE hotel during WrestleMania weekend was a taste of seeing how “the 1 percent live.”

“We’re in the bar, just waiting for the bus to load up, and it’s a who’s who walking by,” Schamberger says. “There goes Jake ‘the Snake’ and DDP. There goes Ric Flair. There’s Bruno Sammartino. And then when we were standing in line for the bus, it’s Maryse in front of us and Kevin Nash standing to the side.”

This wasn’t a typical bus ride, either. New Orleans police provided a motorcade, shutting down traffic, on the way to the Super Dome. Watching WrestleMania, Schamberger says, was the first time that he could finally “turn off’ and finally enjoy the show. He recalls thinking to himself, “Oh wow, in a very small way, I was part of this.”

The following night on Raw, the Warrior wore a hand-painted duster designed by Schamberger. A day later, the Warrior died of a heart attack.

“It was so surreal,” Schamberger says. “I was glad that I was able to be a part of it. Also, getting to know his friends and communicating with his family was definitely tough. And for his agent — his agent’s father had passed away just two weeks before that. So I was really feeling bad for him.”

Schamberger says he never got to meet the Warrior in person, but he did speak with him on the phone.

“He told me that he watched my YouTube videos every week, and that he daydreamed about being in the studio and learning how to paint from me,” Schamberger says. “I just pictured Ultimate Warrior in full gear and shaking things and telling me that the paint needs more rocket fuel. That was really cool. He was a super-nice guy.” 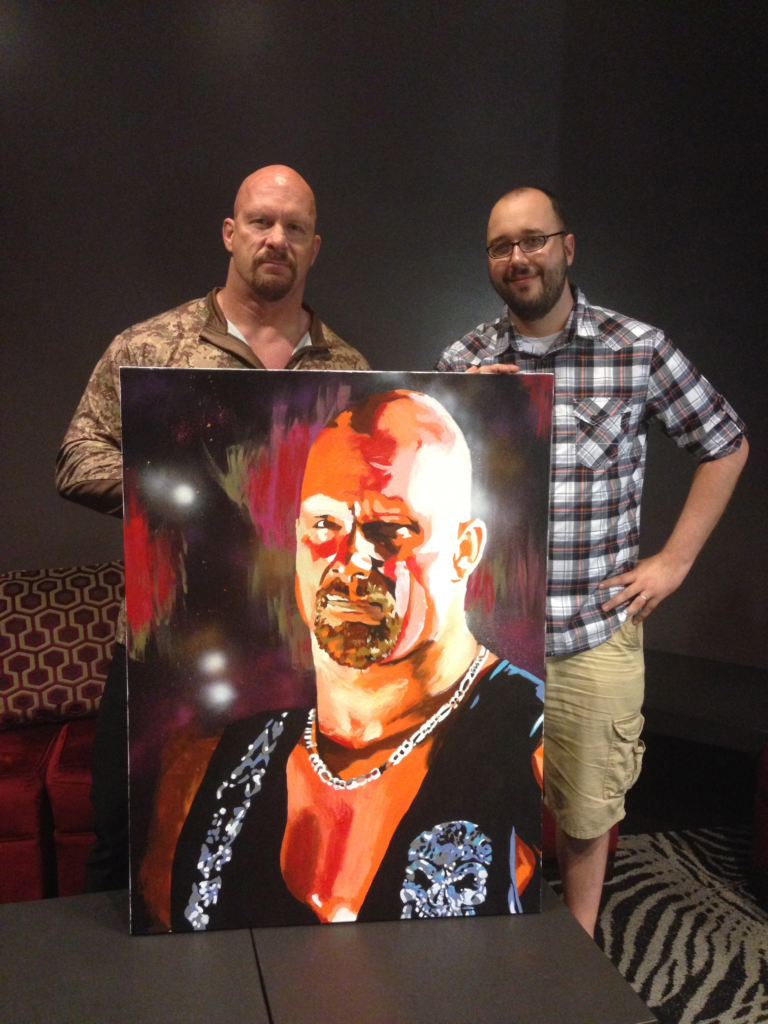 Since then, WWE invited Schamberger to SummerSlam to paint a portrait of “Stone Cold” Steve Austin. Schamberger says he got to show the final product to the “Texas Rattlesnake” and also give him a care package of IPAs from Boulevard.

“Luckily it wasn’t a trap where I gave him the beer and get stunned,” Schamberger says, referencing Austin’s finishing move, the Stone Cold Stunner. “Although, he did publicly threaten me that if I did a bad job, that he’d give me a Stunner.”

The Austin painting was auctioned off for Connor’s Cure, which raises money for pediatric brain and spinal cancer research and medical care, and raised about $1,400. Schamberger also did a painting of the charity’s namesake, Connor Michalek, who died when he was 8 years old, wrestling Triple H.

“That was a tough one,” Schamberger says. “It kind of put into focus what I do and why I do it. He [Connor’s father] told me that he hadn’t been able to look at any photographs of his son from that time because all he was able to see was how sick his son was. And then with the painting, the way that I portrayed him, he was able to look at that and look at a picture of his son again. That was pretty amazing.”

Now, his work is for sale in WWE’s online merchandise shop. He’s also been named the official artist of the National Wrestling Hall of Fame Dan Gable Museum in Waterloo, Iowa.

“It’s been a life-changing experience, from having that miserable day job to being able to make a living off of art,” Schamberger says. “This year, I’ve traveled way more than I ever have in my life, coast-to-coast and doing it because of my art and also because of being associated with WWE. Also, all of the charity stuff is cool. Last year, I raised over $10,000 for various causes, and I’m on track to do the same this year. Being able to make that significant impact for doing something that I like is great.”

There are still a few wrestling legends Schamberger has yet to met. He’s hoping for a chance to finally meet, in person, Ric Flair, Hulk Hogan, Stephanie McMahon and WWE impresario Vince McMahon.

“I’ve only walked by Vince,” Schamberger says. “He’s one that you don’t stop and introduce yourself to — he has to come to you. There’s no rule about that but when I’m there, it’s during TV — Raw or SmackDown — and Vince is doing stuff.”

Doing the art of wrestling has not burned out Schamberger’s fandom. It has only made it stronger.

Schamberger is also looking forward to returning to his roots at Metro Pro Wrestling’s December 6 event (Adam Pearce vs. Ace Steele) at the Turner Rec Center in Kansas City, Kansas.

“There may or may not be a painting being presented to someone in the ring,” Schamberger says. “Hopefully, it goes better than last time.”

Of course, that painting ended up smashed over retiring wrestler Michael Strider’s head.

“It was about perfect,” Schamberger says of the moment.

Schamberger says he’s already in talks with WWE about appearing at Axxess during the WrestleMania 31 weekend.