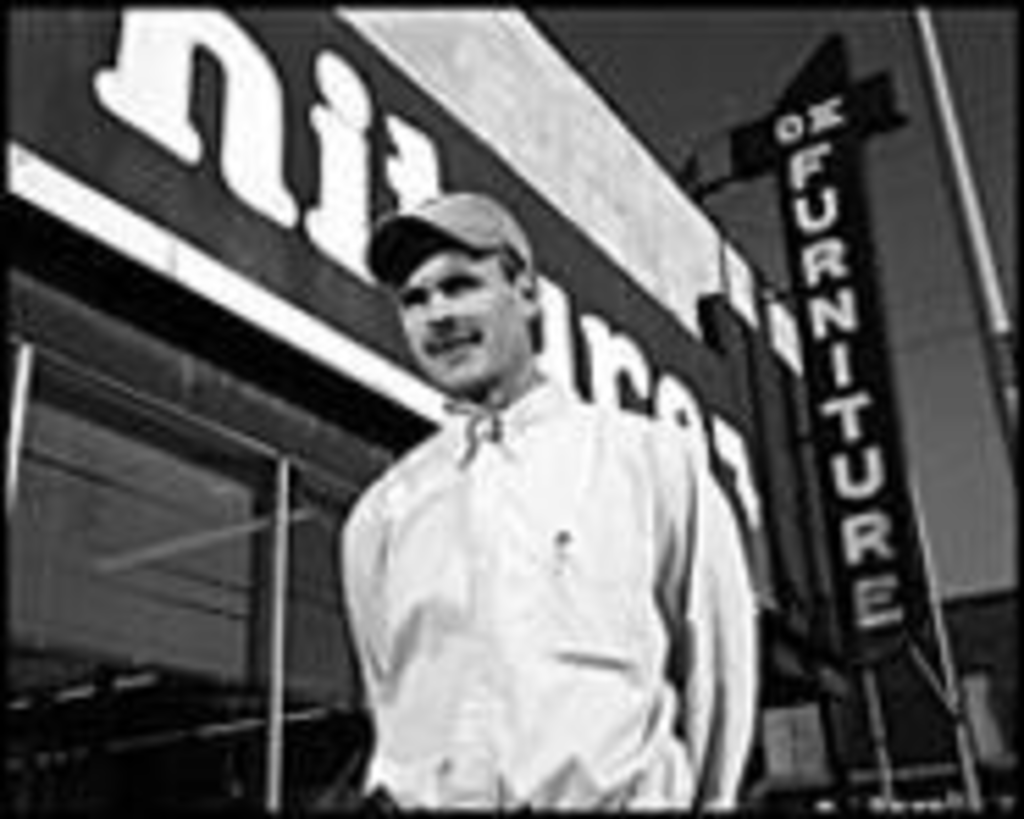 Truman Road is one of my favorite streets. It’s exciting, for example, to see a sign advertising a bookstore I’ve never heard of, only to realize a moment later that those rectangular objects in the window are too big to be books. They’re mattresses. A trip down Truman Road makes me want to drive slowly so I don’t miss anything. Like the enormous rocking chair on top of Gaines Furniture Outlet (a store adorned inside with some truly bizarre taxidermy) or places with names such as Miracle Collision Repair and Kansas City Screw Products Inc. Screw products! Woo hoo!

Driving on Truman Road to Independence a couple of years ago, I noticed a hand-painted sign promising milk jugs. Nobody sells milk in jugs anymore, so seeing the sign gave me this great feeling, as though I could see history in the form of signs on the way to my destination — Leila’s Hair Museum, where I would witness history in the form of hair.

On my most recent Truman Road adventure, I was disappointed to find that the milk-jugs sign had been taken down. But the street still gives the impression of being frozen in time. The present can’t afford to replace the past, so the two live side by side. Comfortably, I think.

I can’t say I reacted calmly when the van pulled off-road and drove behind me on the sidewalk, just to bypass the noontime traffic, as I walked toward the tamale stand on the corner of Truman and Cleveland. But the driver seemed cool. He nodded. I nodded back. Clearly, no harm was meant.

Terry Barker is the man in charge. Jim, the original tamale guy, was his father-in-law. Terry likes it here because it’s easy. “I don’t think it gets any easier than this,” he says, looking off toward the grain elevators on one side, then to the Wendy’s on the other.

It’s a nice day. But I start to feel for Terry, who can’t seem to stop talking about the weather. In the half-hour I spend at Jim’s Tamales, every customer in some manner addresses the climate. It seems like a natural thing to bring up with someone who stands outside all day, but I wonder if Terry ever wants to talk about something else. I mean, the rest of us are talking about uncounted ballots in Ohio and Tom Brokaw’s tloubre with L’s and R’s.

A woman with a scarf around her head tells him it’s not too bad a day we’re having. Terry smiles and agrees. He’s sold about 250 tamales today.

Terry will probably get around to updating that sign someday. People should know his stand’s been here longer than 40 years. After all, there are many food vendors downtown, but, as Terry says, “Ain’t none of ’em been around as long as the tamale guy.”

On the sign that says “Eddie’s Books,” there are eyeballs drawn inside the two O’s. It’s like the sign is lookin’ at you, all crazy and googlylike.

But Eddie hasn’t done business on this street for 12 years. It doesn’t take 12 years to take down a sign and put up a new one. Steve Cox, who runs this liquidation hub with his brother, says the city wants him to get a permit to take down the Eddie’s Books sign. I can’t say this makes much sense to me, but whatever.

Point is, the sign works, even if Steve isn’t Eddie and mattresses aren’t books. When someone needs directions, Steve always tells them, “Look for the Eddie’s Books sign.”

Steve sells refrigerators and upholstered chairs. He liquidates hotels — most recently, the Hilton by the airport. Ever really like the artwork on a hotel wall, those pastel renderings of willows in the wind or a lighthouse shining a single beam from a distant shore? You can buy them here, framed, at $5 a pop. It’s strange to see hotel rooms dissected like this — lamps over here, those weird foot-of-the-bed benches over there, all items upholstered in the same damn fabric. You realize, in this place that is not Eddie’s Books, how predictable hotels are.

Steve’s a nice guy. His friend has arrived to pick on him a little. This friend is wearing a surgical mask to avoid germs; he just had a lung transplant and can’t believe he’s alive. He’s a Vietnam veteran who used to smoke two packs a day. Now he’s a survivor, and he’s taking care of himself. With his immune system intentionally suppressed so he won’t reject the donor organ, he has to watch out — “There are no redos,” he says. Steve gushes about his friend, who sips on a can of Milwaukee’s Best. “He’s like blood to me,” Steve says. Just talking about it makes Steve emotional and gives him a nic fit. He steps out for a cigarette.

Maybe one of Eddie’s books contained a scene like that.

I have never, in all my driving days, thought of OK Furniture as a bad name for a store. But the guy in charge sure has.

“I was wondering about your signs,” I begin.

On the marqueelike green signs with cream-colored bubble lettering, Jim Maybrier points out where the paint has begun to peel — again. “You just can’t get anyone to paint a sign anymore,” he grumbles.

And then there’s that name. “We get a little ribbing,” he explains. “You know, customers asking, ‘It’s just OK?’ I like to joke around and tell them we got a name we can spell.”

Some people hear “OK” and think: mediocre. I picture someone touching his thumb to his index finger to make a big, round O, and three outstretched fingers making a stylin’ K. You know, smooth. So this just-OK business is news to me.

Jim’s card says his place is “a great store with an OK name.”

When the Maybrier family took over in 1980, they decided it was best not to rename a well-known neighborhood shop. The original owners named this OK Furniture back when Truman Road was to dining-room sets what 18th Street was to jazz. “That was the entertainment district,” Jim says. “This was the retail district.”

Music genres fall in and out of favor, but people always need beds. And Jim is an unabashed fan of premium bedding. As one of the many interior signs here explains, “Visco elastic feels fantastic!”

“It’s that therapeutic, NASA, space-age memory foam,” Jim says. He adds a heartfelt “It is an incredible feeling.”

In fact, he warns, “You get into premium bedding and you’ll wish you never did. You’ll never be able to fall asleep on a raggedy-ass bed again.”

It may sound as if Jim’s living a life of luxury when he goes home, but he seems more practical than that. He reveals this when he asks if I know his daughter, who works at Broadway Café. I don’t, but I imagine I’ve seen her there. He tells me that if I see her, I should ask her to stop putting metal in her face and get her car fixed.

So … Zoe? Stop putting metal in your face, and get your car fixed. Hey, I’m just the messenger.