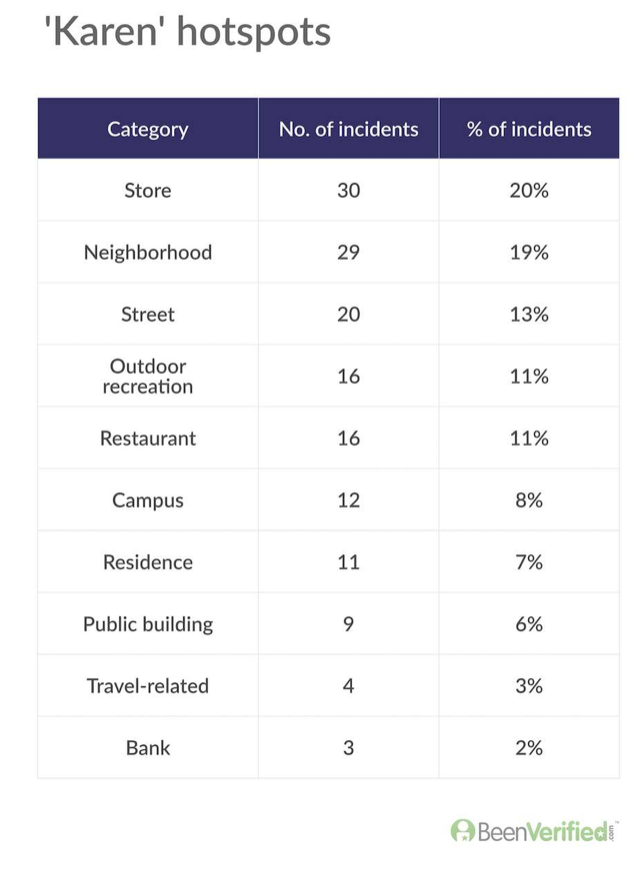 The term “Karen” has risen in popularity over recent years. Regardless of what the individual’s name actually is, the name Karen is often used to describe an entitled white woman who causes a scene over something she deems offensive.

Other characteristics stereotypically associated with Karens include a stacked haircut, ensuring a living hell for the life of retail workers, and being a proud member of the anti-vaccination circle.

Though the meme names used to reference the women that create these situations have changed over the years, a theme that never changes is that they generally target people of color, most often Black people. These scenes usually involve white people calling the authorities on their chosen victims.

While there are variations on the different types of Karens specific scenes can produce, “Central Park Karen” is perhaps the most infamous of these meme-making conflicts as of late. In May, Amy Cooper, a white woman, was filmed calling the police on a Black man, Christopher Cooper, after he asked her to leash her dog while he was bird-watching in New York City’s Central Park.

On August 5, BeenVerified, a leading public data company, released analyzed data from the past two and a half years, in which white people were caught on video calling police or security or asking for the manager on people of color in response to what they see as threatening behavior.

“The purpose of the analysis was to determine which states and environments these incidents are most likely to occur,” states the article that accompanied the data from BeenVerified.

Though more recently the “Karen” meme has developed to describe filmed COVID-19-related outbursts regarding mask wearing, BeenVerified limited their analysis to include episodes like “Central Park Karen” (and predecessors “BBQ Becky,” “Permit Patty” and others) where white people made unwarranted calls to authorities, typically against Black victims.

The article continued by stating:

“For the purpose of this study, we focused on verified news reports since 2018, where raw footage was first uploaded to Facebook, Twitter or other social media platforms, and then subsequent articles written about the videos ricocheted across the social and mainstream media landscape.”

Where ‘Karen’ incidents are occurring 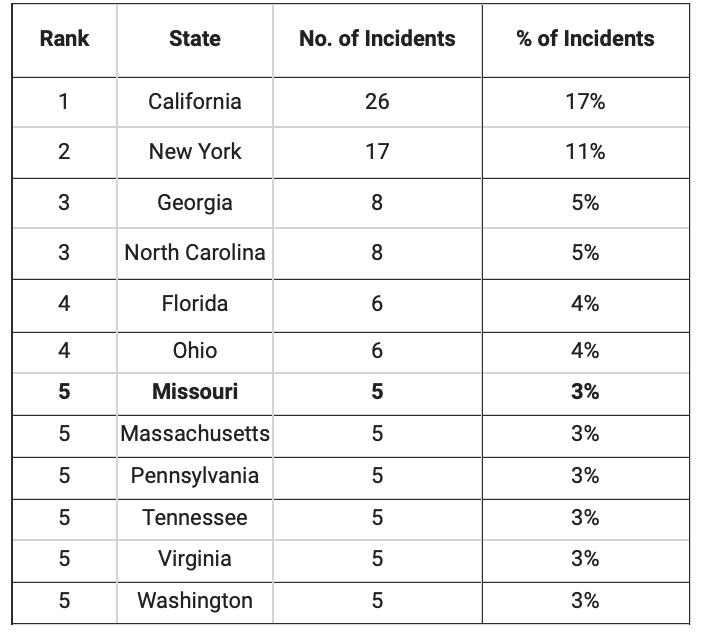 States most likely for a Karen incident to occur. // graph by BeenVerified

Examining the data from across the country, BeenVerified found that Karen occurrences happen most frequently in California (17 percent) and New York (11 percent). Between the two leading states, more than 1 in 4 incidents analyzed happened there. Many are surprised that large conservative states like Florida and Texas don’t lead the Karen crusade but this reasoning points to the fact that New York and California are “both the media capitals of the nation—and perhaps home to more social media influencers—it could be incidents in these states have an outsized chance of being picked up and widely reported,” said Richard Gargan, spokesman for BeenVerified.

California and New York are also taking charge of criminalizing Karen behavior.  In June, state lawmakers in New York passed new legislation against false race-based 911 calls, and lawmakers in California have recently proposed similar legislation against this type of “white caller crime.” Unfortunately, analysis shows that arrests in these incidents are rare, with only six related arrests resulting from 150 incidents.

Thanks to a recent Karen incident at a Taco Bell in Missouri, Missouri also earned a spot as one of the top 5 states most likely to be attacked by a Karen, with 3 percent of analyzed incidents happening in our home state.

BeenVerified found that there were 10 leading locations that viral incidents with fake threats were most likely to occur. While The top three hotspots for Karens to make themselves known were stores at 20 percent, followed by neighborhoods at 19 percent, and streets at 13 percent. Outdoor recreation spots and restaurants both fell at eleven percent, while college campuses and school grounds were at eight percent. Residences were at 7 percent, and public buildings at 6 percent. Travel-related locations and banks closed out the top ten at 3 and 2 percent.

“Further exploration of the data showed that none of the perpetrators were actually named Karen (or Ken, Chad, Gail, Paula or Patty),” states the BeenVerified article. However, “all the recent memes map to names that reached their height of popularity with the post-war baby boomer generation and early Generation X.” This graph confirms the middle-age stereotype that comes with the name Karen. 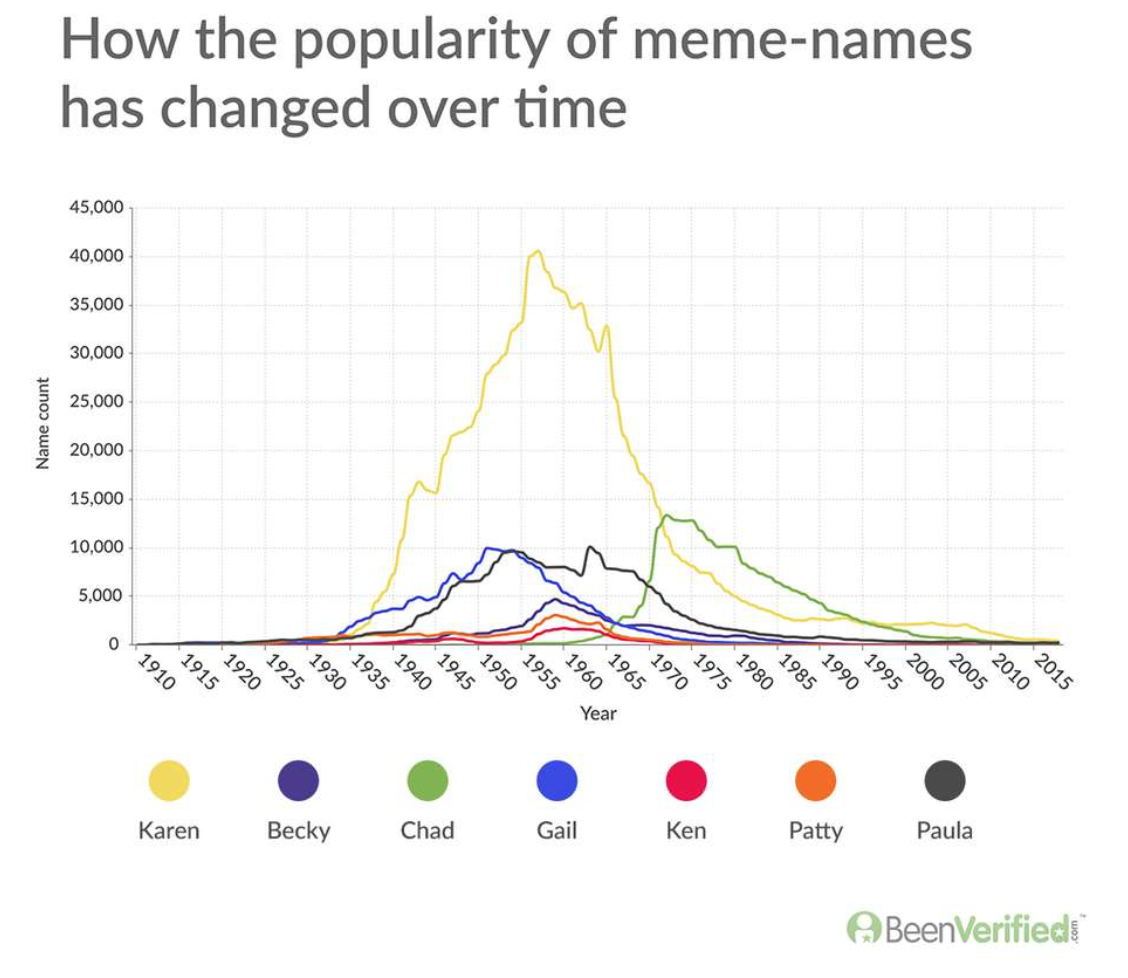 Change in popularity of meme-names over the years // BeenVerified

So next time you meet someone actually named Karen, don’t jump to conclusions. Instead, look at their hair and remember, actions speak louder than names.