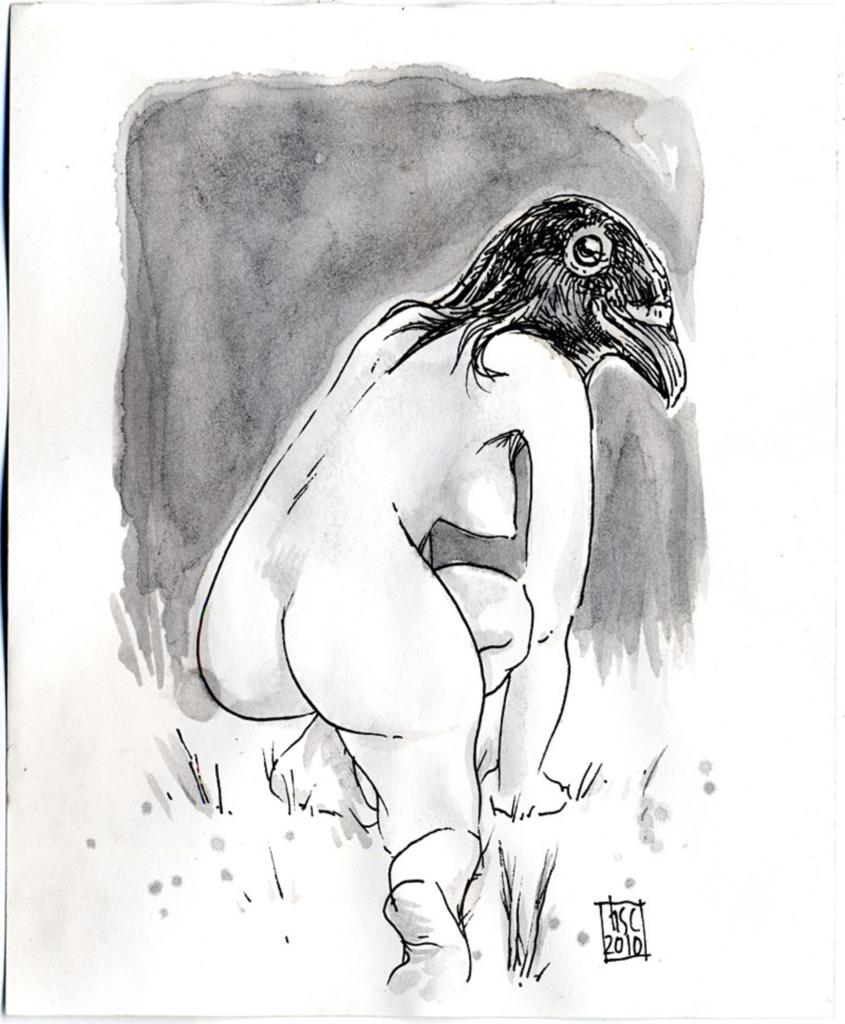 Ask artists for spontaneity and you get a lot of rule breaking. Despite Shapiro’s guidelines, the show includes ink washes, splashes of color and even some unexpected breaches of the second dimension. Davin Watne, one of the many home-run hitters in the exhibit, contributes “X Is for Sex”: a red X, ink-washed on paper, that crosses a girthy penis with a perpendicular, red brush stroke. Kansas City Art Institute instructor Maria Creyts, working under the name Mariaurora, shows a colorful series of sexy circular flora drawings, over which small sculptures of bees hover, mounted to the paper with yellow wire. It really wouldn’t be an erotic art exhibit without a few engorged stamens.

Gear and Adrian Halpern, graffiti artists, contribute some of the exhibit’s best pieces. Halpern’s “Root Chakra” (the title refers to the energy node centered on the fun real estate near the coccyx) is an extremely fine, highly detailed pen-and-ink abstraction, its radial forms emanating from the center of the page and surrounded by an intricately stippled and crosshatched network. It’s a rule breaker in its own way, the density and depth of its detail defying injunctions to be spontaneous. And the richly varied line-work of Gear’s aptly titled “Ink Drawing of a Vagina” and “Penis in a Vagina” have the immediacy and sensuality of Japanese calligraphy, and were, indeed, composed with such a calligraphy brush. The result is rich and distinct from every other piece here.

Shapiro studied with the late Lester Goldman, whose family has contributed an ink sketch that he made during a minimalist period, when he was producing organic gourd sculptures. Shapiro believes that the piece may have been a study for such a sculpture. It’s an engaging glimpse at the unplanned thoughts of a man who could be meticulous in his work, a yin-yang drawing of intertwined feminine forms given depth and volume with crosshatched shadows. It does suggest a sculpture to come, one with a center of gravity and a fragility at once practical and womanly.

Shapiro’s sought-after sponta­neity often manifests as a current of humor. The sensitivity of Hector Casanova‘s luminous drawing of a female torso, a composition of high contrasts and the interplay of light and shadow, is undercut by its title: “BOOBS!!” Confronted with Shapiro’s assignment, David Hu has produced abstractions based on the patterns of his girlfriend’s Gap Body underwear. “Low Rise Hipster,” a clever painting on paper, is a field of cool-green acrylic offsetting rows of paler green stripes. His series also includes “Low Rise Bikini,” consisting of a pattern of white polka dots against a pink background.

New York-based Beth Slutzky‘s contribution is equally clever but strangely moving. Her series of drawings reinterprets the user-profile photos on a dating Web site called okcupid.com; each is exactly as she found it, complete with a recognizable jumble of Web-page ephemera and the site’s photo watermark. “Gold Star 4 Sale #1” is a woman wearing some kind of disco tiara, looking into the camera with an awkwardly suggestive expression; Slutzky exaggerates her features, but the result isn’t a caricature and doesn’t mock her subject. “Gold Star 4 Sale #2” depicts the same woman posing on a bed in thigh-high boots. It’s an even more candid image, but — contrary to the Web’s propensity for cruel ridicule — Slutzky approaches it with sensitivity and an eye for the telling detail.

The face of the man in Kansas City artist Mary Ware‘s smart, funny series of untitled “bored cunnilingus” sketches is never visible. While he’s occupied, his partner is distracted in one of the pieces by her Nintendo console; in others, she’s attempting to cook or read. Add dumb captions, you might think, and they’d be Playboy cartoons. Despite Playboy‘s reputation for sophistication, though, the magazine’s cartoons are sloppy these days, far removed from Ware’s fine pen work and attention to detail. The pieces are simultaneously cerebral and earthy, witty and not without mystery. Is the dude in Ware’s drawings just really bad at giving head? Is the woman’s disinterest a reflection of the man’s?

A final mystery: What’s with Ripe’s proliferation of sexy game fowl? Casanova contributes “Pidge,” a bird-headed woman in a pinup pose. Jori Sackin‘s headless, fishnet-wearing cartoon women are accompanied by one serious-looking chicken. The closest thing to an answer comes from Icecreamlandia illustrator Evie Englezos, who reminds the viewer of Greek mythology with her “Leda.” In the legend, Zeus comes to Leda in the form of a swan and then has interspecies sex with her. Englezos’ swan dives into Leda’s vagina, then emerges from her mouth while honking “Oh Baby.” For the ancient Greeks, sex with birds was socially acceptable. It seems a little more out there these days.