Riding the Storm out 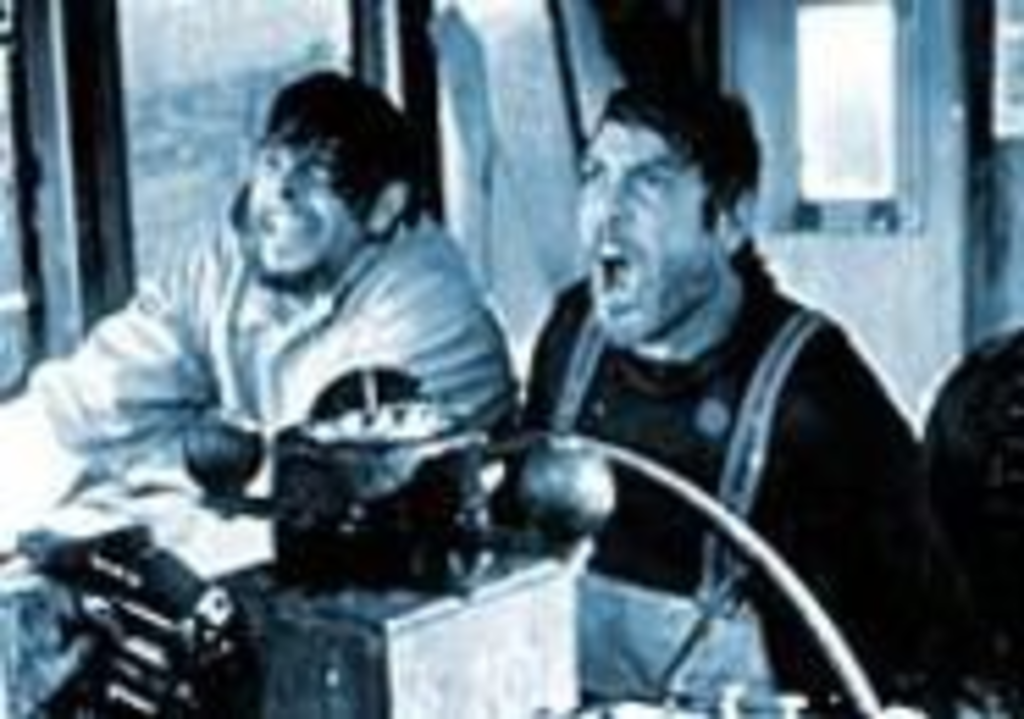 Not since Jaws has a film caused viewers so much apprehension about taking their next dip in the ocean. But despite its visceral charms, The Perfect Storm is a far cry from Steven Spielberg’s 1975 blockbuster. Its watery digital effects may be slicker than a temperamental mechanical shark, but the movie is lacking in the character department and is downright slushy in its romantic elements. While bringing this gripping true story to the screen, director Wolfgang Petersen (Das Boot) falls into familiar traps that prevent his latest from being as memorable as Spielberg’s ultimate advertisement for dry land.

In October of 1991, a swordfishing boat named the Andrea Gail prepares to set sail from Gloucester, Massachusetts. “This time I promise you we’ll come back with a shitload of fish,” Captain Billy Tyne (George Clooney) proclaims. Driven by his string of substandard hauls, he reassembles his crew (who are paid by the gross weight of the fish delivered) for one last run before winter. Included is novice Bobby (Mark Wahlberg), who needs the money to pay off his divorce lawyer and start fresh with his new girlfriend, Christina (Diane Lane). With the rest of the seasoned crew (John C. Reilly, Allen Payne, John Hawkes, and William Fichtner), the ship heads for the Flemish Cap, unaware that a storm’s a-brewin’.

“You could be a meteorologist all your life and never see anything like this. It could be a disaster of epic proportions. It could be the perfect storm,” a local weatherman (Christopher McDonald) tells his assistant with Edgar Allan Poe-like earnestness. Once far out to sea, Capt. Billy must decide whether they should wait out the fearsome squall, in which case his catch will spoil, or head back through the hurricane-plagued region. Obviously, they don’t make movies about people waiting around.

Once past the pat exposition, which is designed solely to show what loved ones the fisherman have to come back to, The Perfect Storm achieves and sustains a level of intensity that is unrivaled in recent action flicks. You’d have to go back to a movie such as Aliens (or maybe, more appropriately, the final third of Titanic) to find such a well-crafted series of escalating events that are designed to keep the audience enthralled.

One of the ways Petersen accomplishes this is by establishing parallel action that is equally harrowing. Instead of just showing the fishing boat in peril, then cutting back to the women and friends who are gathered at a local tavern watching the weather reports on TV, he introduces a whole ancillary group of people. That group first involves a sailboat carrying three passengers (Karen Allen, Bob Gunton, and Cherry Jones) who must be rescued by a Coast Guard helicopter. This worsens when the rescuers run into problems and invoke the aid of a Coast Guard cutter. The ongoing military-style operation is as compelling as the Andrea Gail‘s travails, but it also offers a different, more precise view of how to confront and (hopefully) survive a climatic opponent. (In his previous film, Air Force One, the director had little of interest to cut between. It was essentially a good guy versus bad guy scenario, and when moving away from the action he had nothing but a boardroom of talking heads to fill the gaps between segments involving the protagonist.)

Whereas Petersen has been responsible for compositional clichés in the past — especially noticeable in his self-penned Shattered, the amnesia-driven thriller everyone would like to forget — he’s rarely been so susceptible to them in cinematic terms. The screenplay by Bill Wittliff (Legends of the Fall), based on the tech-heavy novel by Sebastian Junger, isn’t exactly Mamet, but Petersen shoots the simplest moments with overused camera moves. There’s the obligatory Bolt Up From a Nightmare in Bed Scene, where Christina is awakened by an image of her beloved being rocked by turbulent seas. This is soon followed by the Spinning Kiss Scene, where Christina first embraces returning boyfriend Bobby while the camera circles around them like a tetherball.

Actually these formula displays are just a side effect of the film’s fundamental flaw: The Perfect Storm is a “guy’s movie” that the studio suits determined needed more “girl stuff.” It’s surprising that there’s no sequence in which the long-suffering women all lip-synch to a ’60s pop tune or a montage where they drink wine and try on hats.

This demographic pandering is unnecessary for such subject matter. Drowning, being lost at sea, battling an angry Mother Nature — these are universal fears among genders and don’t need to be treated as if they’ll appeal only to the beer-guzzling, Monday Night Football crowd. This results in such lines of dialogue as Christina’s hysterically asking Bobby (in anticipation of his leaving on another dangerous journey), “Why do I even love you?” — a phrase that no one has ever said in real life.

This Steel Magnolias mentality most hideously rears itself during Bobby’s pseudo-soliloquy. As the fisherman awaits his fate in the water, he conjures cinematic images of reuniting with his girlfriend. A weepy speech about the couple’s love then appears in voiceover to the strains of James Horner’s “inspirational” score. Okay, we get it. Couldn’t the same effect be achieved by simply showing a close-up of Bobby in the water while there’s a quick flash (à la Seven) of his girlfriend’s dutiful face? Ultimately, that isn’t even necessary, because the filmmaker spends so much screen time hammering the audience with the fact that the couple is in love that we already presume what he’s thinking about; we don’t need superimposed photos and a poetry reading to figure it out.

It’s hard enough to care for any of the characters emotionally without the maudlin portraits. Like when crewman Sully (Fichtner), who, in The Perfect Storm‘s most nail-biting scene, immediately dives overboard to save his hated rival, Murph (Reilly), viewers’ unthinking reaction is to become involved with a life-or-death/man versus nature struggle. It’s human nature, so emotion doesn’t necessarily enter into it. Thus, the characters don’t need to be particularly well-drawn (Clooney and Wahlberg’s work is far superior in Three Kings), but the way in which the no-frills material is presented does necessitate a fresh approach — an approach that Petersen abandons in favor of syrupy goodbyes accompanied by wind machines and digital waves. The movie itself is like a raging storm: impossible to ignore while it’s happening but easy to forget when the weather has died down.