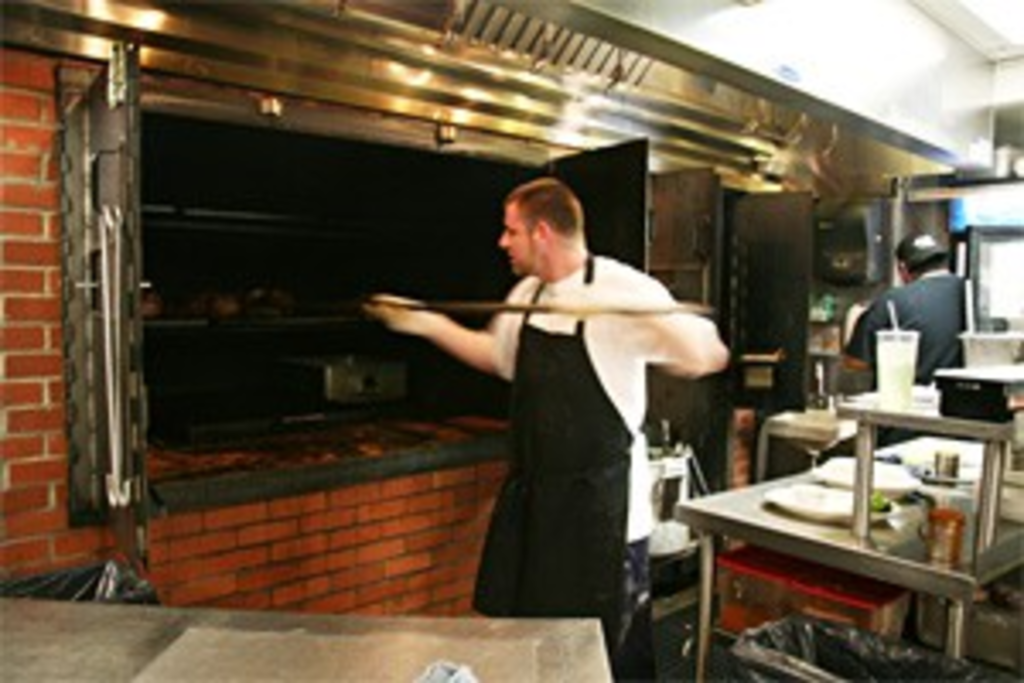 I’m not superstitious or anything, but I’m rubbing the rabbit’s foot on my desk (next to my lucky penny and my ceramic Maneki Neko figurine) as I write about a new restaurant in Lee’s Summit, because the last two places I reviewed there closed! It had nothing to do with my reviews, mind you. I actually liked one of the restaurants — Dan’s Place, the former Chick-N-Blues. The other one, a bizarre combination of dining room and gift emporium called The Victorian Peddler, was a little too precious for me and apparently plenty of raucous Lee’s Summitonians. Out went the Victoriana and the perfumed candles, and in went Jerry’s Bait Shop, which promises three simple things: “A warm shot of tequila and a cold beer served in a family-friendly atmosphere.” In downtown Lee’s Summit, liquor trumps lace any day.

I have friends who can’t believe the quickly growing suburb even has a downtown, but I assure them it does. The hamlet dates back to 1865 and, honestly, it’s pretty charming. (The city’s even posted a “Master Plan” on its Web site. I haven’t read all the details, but as long as nothing happens to the Dairy Queen, I’m all for it.)

The downtown also has its own barbecue joint, Beauchamps on the Rail, which turns one this spring. I first heard about the place one morning with other restaurant critics on KCUR’s Walt Bodine Show. Among the callers that day, more people called in to argue about how to pronounce the restaurant’s name than to talk about its food. For the record, it’s not the French-sounding bow-sham (like Canadian nymphette Bianca Beauchamp, the “fetish sex symbol”), but in the British manner, beech-ham — like a couple of villages (and earls) in England.

Owners Joe Beauchamp and Brian Donigan boast that their restaurant serves “Kansas City’s finest barbecue,” which might be fighting words. It’s definitely the finest barbecue in Lee’s Summit, and the ribs and chicken come damn close to comparable dishes in some of the more iconic joints in the real River City.

On the night I dined there with Bob, Eddie and Wendy, our engaging waiter, David, was a fountain of information. Starting with the history of the 104-year-old building, he told us it had been both a hardware store and a furniture shop before Beauchamp and Donigan turned it into an upscale barbecue restaurant.

Okay, upscale might be pushing it. But beyond the paper napkins and relaxed, informal atmosphere, this place does offer some unexpected surprises. Excellent Angus beef steaks, for one, and grilled seafood and an impressive array of combination plates for diners like me who want to taste a little bit of everything on the menu without ordering too much food.

It helped that David the Waiter was brutally candid, steering us away from a couple of dishes and encouraging us to order a few others. He seemed to know what he was talking about, so we followed his advice. That didn’t stop us from stuffing ourselves silly, and we took home a few leftovers, too.

If it weren’t for David’s recommendations, I probably wouldn’t have ordered the “Trestle” (all of the starters and a couple of the dinners have cutesy railroad-themed names). But this appetizer turned out to be a wonderful variation on that blossoming-onion idea, with the onion fried in a delicate batter and served with a snappy horseradish sauce. The Cajun-grilled shrimp weren’t “jumbo” as the menu had promised, but their deft seasoning made up for that. And even though deep-fried mushrooms have never been among my favorite starters, Beauchamps serves them in a light, lemony butter sauce that seems to have a little Italian dressing tossed in. Since I ate most of the chubby little things, I’ll have to rethink my position on this pub perennial.

The signature dish here is ribs — Angus beef, lamb and pork — smoked over a hickory pit at the back of the building, as are the other meats. The Rail Sampler combo platter let me sample a meaty beef rib, a succulent pork rib, some barbecued chicken and tender burnt ends. Eddie ordered a plate of pork ribs and agreed that they were outstanding. Wendy, who pretends to need to diet, ordered a modest sandwich of brisket on a French roll — but she was just as aggressive as I was in digging into the fine crispy fries, the cheesy baked corn (not up to the Jack Stack standard, but close) and the hickory-smoked baked beans. I think she ate a rib or two, as well. Bob, who’s a serious barbecue snob, liked everything except the brisket and gave high marks to those burnt ends.

As for dessert that night — forget it, although we did look at the tray of glossy, commercially prepared pastries, just in case.

I returned for another dinner with Franklin and Ned, both of whom were intrigued by the idea of Lee’s Summit having its own first-rate, independently owned barbecue joint.

Franklin confessed, however, that all he really wanted was steak and a baked potato. He fell for the description of that night’s Surf and Turf special, an 8-ounce filet and a jumble of those Cajun shrimp. Not only was it bargain-priced, but Franklin insisted that it was far better than the beef he’d eaten at a big-name steakhouse a few nights earlier.

Ned astounded us by tearing into the Brick Oven Special, a plate of ribs and almost every side dish on the menu. “It’s fantastic,” he said as he bit into a fork-tender rib bone. I made quick work of a plate of succulent lamb ribs and also polished off the beans, the fries and even the cole slaw, which I usually detest.

Ned insisted on dessert, so we shared a wedge of some fudge-and-chocolate-mousse creation I’ve had at other restaurants that don’t make their own sweets; it tasted surprisingly good after all that salty, smoky food.

Donigan and Beauchamp are expanding the menu considerably for their upcoming anniversary, adding specialty wood-grilled pizzas, a roasted-vegetable sandwich and nine more salads. They’re also going to have another grand-opening celebration because street construction in front of the building hindered the first one, last May. There’s still quite a bit of construction and several ripped-up streets in downtown Lee’s Summit, but Donigan says it’s all supposed to be finished by the end of April, just in time to open their outdoor patio.

In spite of everything, he adds, business at Beauchamp’s has been good. Maybe I don’t need to rub my rabbit’s foot after all. Or maybe they’ve just figured out what works in Lee’s Summit.