After visiting RH Leawood, Restoration Hardware’s new Town Center Plaza gallery, one of only five such behemoths in the country, I have a new life goal: I need to own the impossibly plush sofa known as the Cloud.

Prior to a ribbon-cutting ceremony there earlier this month, as I toured the 56,000-square-foot space with several Restoration Hardware employees in town for the event, I spotted it first thing. One of the people leading my tour seemed surprised that I wasn’t already familiar with the Cloud, a classically elegant white couch and a staple of the Restoration Hardware line. Surely I’d encountered this couch at the home-furnishing store’s former Country Club Plaza location. Surely I’d wandered in one afternoon and looked around for disapproving eyes before lowering my denim-shorts-clad bottom unceremoniously onto its luxurious, pristine surface.

I could summon no such memory. And I can say now that, yes, I would definitely have remembered sitting on the Cloud.

I was getting ready to sit on the couch when one of my guides told me I had to do it the right way — that is, lean back and fall, as though participating in one of those grade-school trust-building activities. So I did, and I’d never experienced anything else like it. I was enveloped in incomparable softness. The cushions, I sensed, were stuffed with unicorn tails, the undergirding construction held together by magical incantations.

Of course, I didn’t stay — in order to do that, I’d had to have actually bought the thing. And to have bought it, someone would eventually have had to tell me what it cost. There was no price tag, but I knew the Cloud was hilariously out of my range. It once took me months to justify purchasing a smallish sofa on sale at Nebraska Furniture Mart.

A girl can dream, though. And there were other dreams in store here. 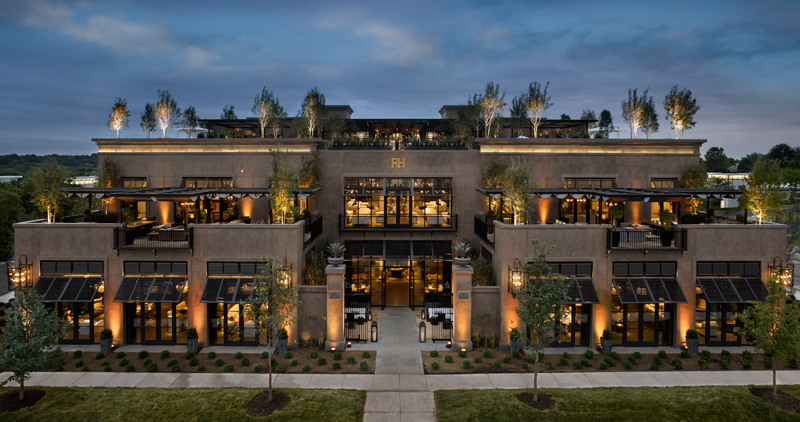 The first floor of the imposing building, an impressive mushrooming of the space formerly occupied by 810 Zone, features the classic stuff: twinkling crystal chandeliers large enough to kill someone in a horror movie, chestnut-brown leather chairs, accent pieces in shades of gray and dark gray and slightly lighter dark gray. 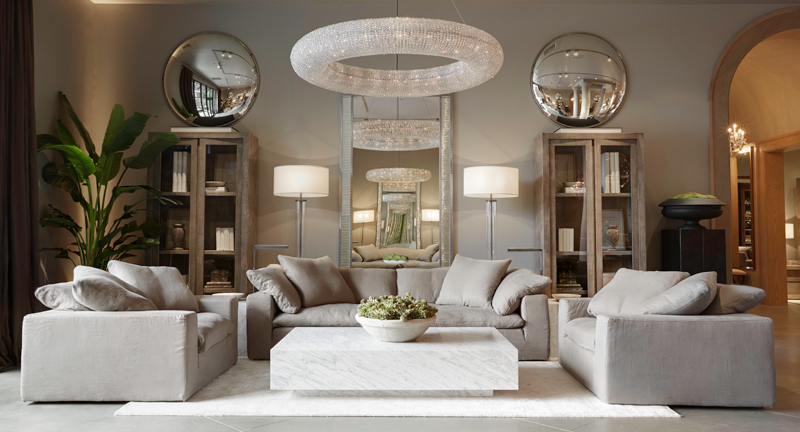 The second floor houses the RH Modern collection, which was introduced last fall. To walk among its offerings, you ascend an open, stately staircase flanked with mirrors and illuminated by even more chandeliers. Confronted by your repeating reflection, you can utilize this opportunity to examine exactly how out of place you look at Restoration Hardware. Are you modern enough to seem at ease with the minimalist aesthetic up here? Do you have a soaring room at home that awaits designs by artists such as Sebastian Leon, a musician who attempts to paint what he hears in rock songs? My face in the mirrors could not lie. 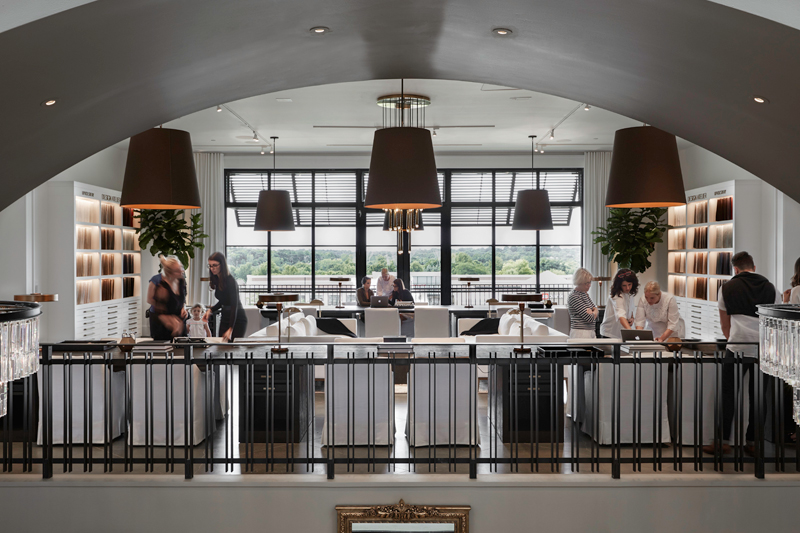 If you have all of the money, I suspect the real fun starts in the Design Atelier. This is where you go to customize your home, surrounded by the swaths of fine fabrics and leathers that line the walls. You can flip through a display of Ben Soleimani rugs that cost many thousands of dollars, as though thumbing the pages of a great talmudic book. I stroked the rugs to soothe myself against any judgment that might have been taking place as people in Chanel circled near.

Then there’s the room dedicated solely to bathroom hardware, glittering with frying-pan-sized showerheads and coiled spray hoses. You can’t step into this glossy little chamber without imagining that you, too, could make every shower a damn tropical rainfall. Here is where I felt most covetous of all.

Finally, the third story features a lush garden space whose chief crop is wicker lawn furniture. Also: fountains, as well as a great view of the southern metro’s seemingly endless suburban sprawl. As I touched a centerpiece composed of spiky succulents to see if they were real (they were), a gentle rain started to fall. Nearby, a group of employees held some kind of team meeting, laughing and smiling, seemingly oblivious to what the weather was inevitably doing to their hair.

After I took the elevator back downstairs, I noticed that a smattering of well-dressed spectators had gathered on the sidewalk for the ribbon-cutting, standing calmly in the rain. Part of me wanted to stick around and see if they enjoyed the Cloud as much as I had. But I don’t believe that anyone could have.

I headed home to eat lunch on my own sofa. It’s no Cloud, but maybe it’s protecting my posture by making me sit more upright. And it does let me forgive myself when I spill crumbs on it now and then.