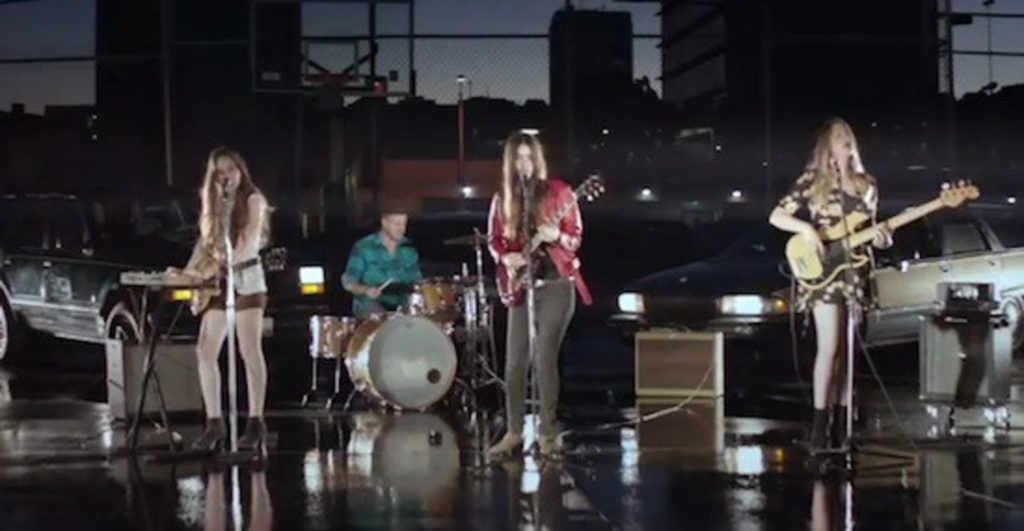 Haim is absolutely the band to know right now. (Unless you’re listening to Lorde. She’s the other one that no one will stop playing.) While I had my misgivings about what the Haim show last night at the Granada would look like – forgive me if I’m not overly charmed by three singing sisters whose debut album sounds like the love child of Fleetwood Mac and Phil Collins – I will begrudgingly admit that, yes, the band has a really tight live act.

Actually, I’ll readily admit it. Those sisters can rock a bitching center hair part and shred guitars like bosses, and there wasn’t a single person in the audience last night who didn’t totally want to be one of the Haims.

The girls strutted out onstage and took their equally spaced spots, each set up with a tom-tom drum: Este, with a shock of ruby-red lips and blond hair, assumed stage right; middle child and lead singer Danielle was in the center; Alana, the youngest Haim, took stage left, dressed in a baggy red T-shirt that almost entirely masked the fact that she was wearing teeny tiny shorts. Together onstage, with their long hair and sibling-ness, Haim was vaguely reminiscent of Hanson.

Oh, there was also a male drummer.

Anyway, they opened with “Falling,” and followed it with their new hit single, “The Wire.” In a live setting, Danielle’s vocals come off much rougher and guttural than they do on record. On their debut record, Days Are Gone, released on September 30, the 11 tracks come off as acid-washed, upcycled dance pop; in person, Haim is all rock, and they don’t water it down.

“We’re gonna jam for a second,” announced Este by way of introducing the third song. “This is what we do at our house when our parents aren’t around – we pick up some instruments and see what happens.”

What happened was a cover of Fleetwood Mac’s “Oh Well.” The musicians engaged in some massive guitar riffs, pulling the bass faces that they have undoubtedly been practicing in the mirror since they could first grasp their instruments with tiny toddler hands. I wondered mildly if anyone would smash a guitar at any point, and decided that if the entire show was muted, it would look like we were watching a metal hair band perform.

“Honey I,” one of Days Are Gone‘s softer songs, was given a hard punk-rock treatment. It’s hard to put a finger on exactly what kind of range Danielle Haim is working with, but on “Honey I,” her voice was Joan Jett-style rough and raspy, offsetting the sweetness of the chorus and the propulsive drumbeats.

“Do you think they’d still be as good if they cut all their hair off?” someone behind me asked her companion.

[page]Haim tried to get the crowd to dance with “Cover Your Eyes,” but the Granada, though packed with a highly enthusiastic audience, was apparently not drunk enough for that.

The sisters made a point of saying over and over how much they loved Lawrence. Whether they meant it or not, it was definitely the right thing to say; the crowd loved them all the more for it. Alana said she wanted to move, and Este told the crowd she was just looking for a nice, tall boy to take her to a basketball game.

“I’m tall as fuck, I need a tall basketball player,” she said, scanning her eyes over the crowd. “Oh, there’s on hand up. How tall are you? What position?”

“He looks about 16,” said Danielle, tossing her sister a look. “Are you legal?”

He wasn’t. It was an all-ages show. He actually was 16. Este was unperturbed.

“You’re a babe, though,” she told him. “Is that OK to say? Let’s play some more music before I get myself in trouble.”

“Don’t Save Me” followed, and there were a few more moving bodies for that song. The band closed its set with “Forever,” and Danielle’s punchy “Ha!” vocalizations were lifted directly from vintage Michael Jackson.

And then it was over. Seven songs, and Haim was saying its fake-goodbyes. They returned shortly after, and I was expecting some kind of marathon three- or four-song encore. They had managed to stretch out their set to around 50 minutes, but Days Are Gone is an 11-track album, and for all the hype, I expected it in full.

Alas, it wasn’t to be. They played “Let Me Go” and followed it with an incredible synchronized drum instrumental, their hair flying, putting their bodies into the beats. They tossed their sticks aside breathlessly when it finished and smiled as they walked off stage, leaving the starry-eyed young crowd screaming their allegiance to these new rock goddesses. It’s good to be Haim right now.