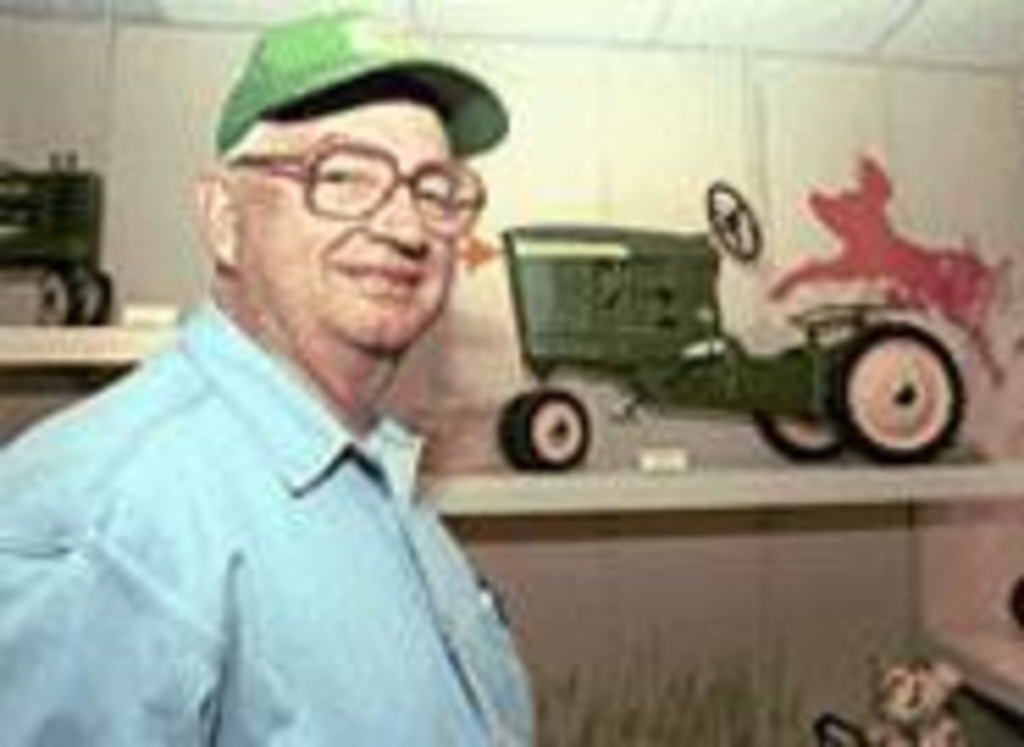 Tractor Don likes things that endure, things that adapt and survive the decades. Particularly, he likes the antique pedal tractors he collects and restores; they’re made of sturdy aluminum, as opposed to the rust-prone steel used on earlier models.

“The only way you can destroy these tractors is by backing over them with a truck,” says Tractor Don, the Merriam man whose real name is Don Hrabik and whose collection is on display at the Toy and Miniature Museum. Surrounded by twenty knee-high tractor models that date back to 1949, the former metals teacher (who dates back to 1932) reflects on his own resistance to destruction.

“You have to stay busy or you deteriorate pretty fast,” Hrabik says from beneath a green John Deere cap. Upon his retirement a decade ago from the Shawnee Mission School District, where he ended up directing vocational education, the former farm boy began bidding on pedal tractors at auctions and farm sales — and even Web sites like eBay. Hrabik has his own site, which he says has drawn more than 30,000 hits in the past five years.

Hrabik’s precise work on tractors great and small has made him restoration royalty. Besides his 46 pedal tractors, he has restored four full-size, antique tractors, earning awards at tractor shows and parades. He is the president of the Greater Kansas City 2-Cylinder Club.

But he prefers pedal tractors. First manufactured in the 1940s, farm-equipment companies sometimes gave them as gifts to the children of farmers who purchased machinery — the tractors were to John Deere what Happy Meal toys are to McDonald’s. But whereas french fries accompanied by junky Disney action figures might lay the psychological groundwork for a lifetime of obesity, pedal tractors once set the tone for a lifetime commitment to farming. Many of today’s crop growers began their careers pedaling through their fathers’ barns.

Pedal tractors, which are still in limited production, endure today as a rural route between generations. When Hrabik’s granddaughters visit, they help him restore tractors by “cooking tires” to soften the rubber before applying rims.

“They get the tires. I get the water boiling in the kettle,” Hrabik says. “Some people will never have that experience.”

People can get a sense of that experience at the Toy and Miniature Museum’s exhibit, marked by hay, handkerchiefs, old advertisements and a “press here for real tractor sounds” button.

Among the shiny red, blue, green and yellow tractors with new tires and carefully applied decals, it’s difficult for Hrabik to pick a favorite. He scans the collection and stops at the only unrestored tractor in the room. It’s a weathered, paint-stripped 1954 John Deere Large 60, shown next to its sleek, refurbished counterpart in a “before and after” display.

“I like that one as well as any of them,” Hrabik says. Four days later, a man calls Hrabik, hoping to buy the same tractor to restore for his young daughter.