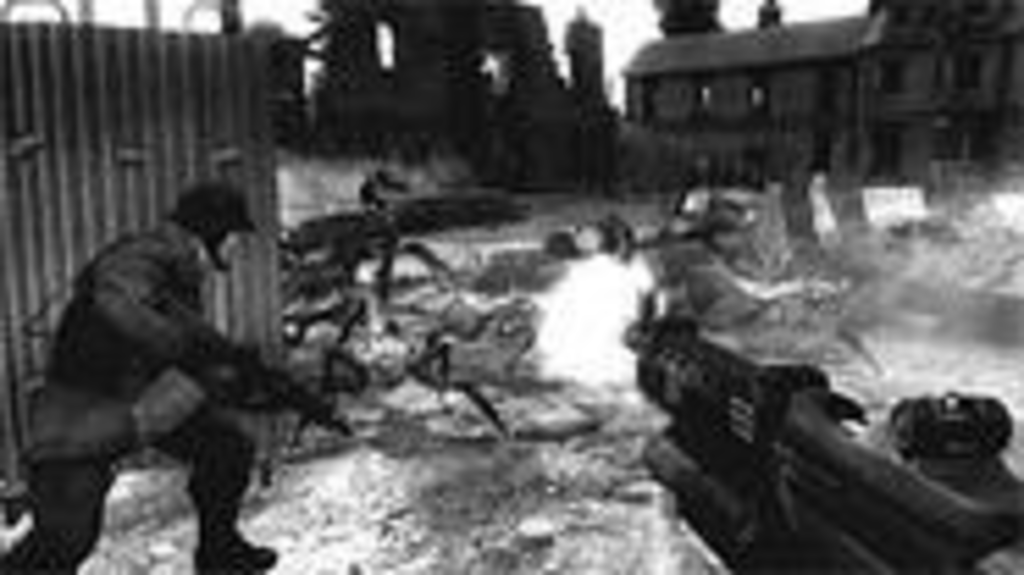 Imagine two game producers rushing down the hall. One wants to pitch a WW2 game, the other a sci-fi shooter. They round a corner, crash into each other, and their papers go flying everywhere — and in one of those great “You got chocolate in my peanut butter!” moments, Resistance: Fall of Man is born.

That, or it’s just a cynical cash-in on the twin popularity of Call of Duty and Halo.

Either way, the WW2/aliens culture clash at the heart of the game does yield a cool variety of weapons — sadly, it’s the only part of the game that shows a creative spark. While you start with a trusty machine gun, before long you come across bizarre weaponry like Hedgehog grenades (which throw sharp slivers of metal in every direction) and the almighty Auger, a weapon with rounds that burrow through anything — including walls.

Controls are the most important part of any first-person shooter, and Resistance‘s are a joy. With a little practice, it’s easy to put bullets (or lasers, or rockets) exactly where you want them. The game even integrates the Sixaxis controller’s motion-sensing capabilities in a modest way: Certain enemies latch onto you, forcing you to “shake them off” by waving the controller around. It’s gimmicky, but gets your heart pumping.

The only problem is the well-documented quirkiness of the Sixaxis itself, which sometimes transmits bad information to the PS3 — meaning your character might step out of cover on his own, or find himself turning around for no reason at all. The results, not surprisingly, range from annoying to catastrophic.

Being on the PlayStation 3, Resistance was expected to deliver awesome graphics — and it does, mostly. Enemies are detailed and well animated, and some of the environments are breathtaking in scope; the massive Chimeran structures seen later in the game are stunning examples of sci-fi artistry.

Yet other areas are downright underwhelming, perhaps because we’ve seen them so many times before (how many more bombed-out European cities must we endure?). And while Resistance‘s levels have scale, little details are missing. Without that texture, the areas feel barren and sterile.

But at least it keeps you coming back for more. There’s a plethora of hidden extras, including a whole new set of weapons. The multiplayer options are a blast — especially the massive 20-on-20 online throwdowns. There’s even a co-op for those who don’t get off on slaughtering fellow gamers.

Considering the overall weakness of the PS3’s launch lineup, simply proclaiming Resistance the best of the lot is like pointing to a part of the Titanic that’s less under water. The game benefits from the PS3’s slim pickings, making it appear better than it is. But stacked against the Xbox 360’s Gears of War, Resistance is merely a competent shooter. Now compare it to the Nintendo Wii’s launch titles, with which you can perform virtual surgery (Trauma Center: Second Opinion), pick up a spare in bowling (Wii Sports), and swordfight and fish (Legend of Zelda: Twilight Princess) — all on a console that costs half as much as the PS3.

Is it fair to make these comparisons? To expect a wildly innovative experience for your $600? To hold Resistance — the premier title for the PS3 — to that high a standard?