After fleeing Afghanistan in August 2021, the Kohistani family was resettled in Webb City, Missouri by the U.S. government.

Less than a year later, their eldest son 14-year-old Rezwan, was found hanged at Webb City High School May 5, 2022.

Tonight, the KC Muslim Civic Initiative (KC-MCI) is hosting an 8 p.m. vigil within the Colonnade at Concourse Park, in conjunction with vigils in seven major U.S. cities in a shared call for justice.

“I don’t know all the facts around Rezwan’s death, which is the reason we are calling for a proper investigation,” says KC-MCI organizer Waleed Al-Shaikhli. “What I do know, being a Muslim refugee from Iraq, is that being a Muslim child in America is tough. There is so much hate targeted toward Muslims that bullying and Islamophobia are normalized. Schools rarely intervene to stop it.”

The KC Muslim Civic Initiative said it hopes the vigil will encourage all cities where Afghan refugee students are resettled to train school staff and students to address bullying.

KC-MCI organizer Laela Zaidi is a Pakistani Muslim from Joplin, Missouri, which is only about 15 minutes from Webb City.

“I’m not a refugee, but I experienced so much anti-Muslim hatred there,” she says. “I can’t imagine what this family is going through. That’s why we’re organizing this in solidarity with them, and to raise awareness about their struggle. We’re encouraging people to donate, because this family is going through a second relocation—a second resettlement—because of what happened. Which is going to compound the trauma. All we can do is show them they’re not alone and that we’re not going to forget that this happened.”

The vigil is a show of support for the Kohistani family, but it also brings attention to Muslim harassment on a larger scale.

“The tragic circumstances of Rezwan’s death has made a ripple effect amongst Afghans, Muslims, refugees, and concerned people across the country,” Zaidi says. “It reflects the unfortunate circumstances of this entire evacuation process from Afghanistan, the uneven treatment of refugees in our country, and the mistreatment of Muslims more generally—especially those who are economically or socially vulnerable. We’re concerned that refugees, especially our youth, may be resettled in places that are hostile to them.”

Donations to support the resettlement of the Kohistani family to a new home in Texas can be made through their GoFundMe.

Further information on the nationwide vigils being held tonight are available in the image below. 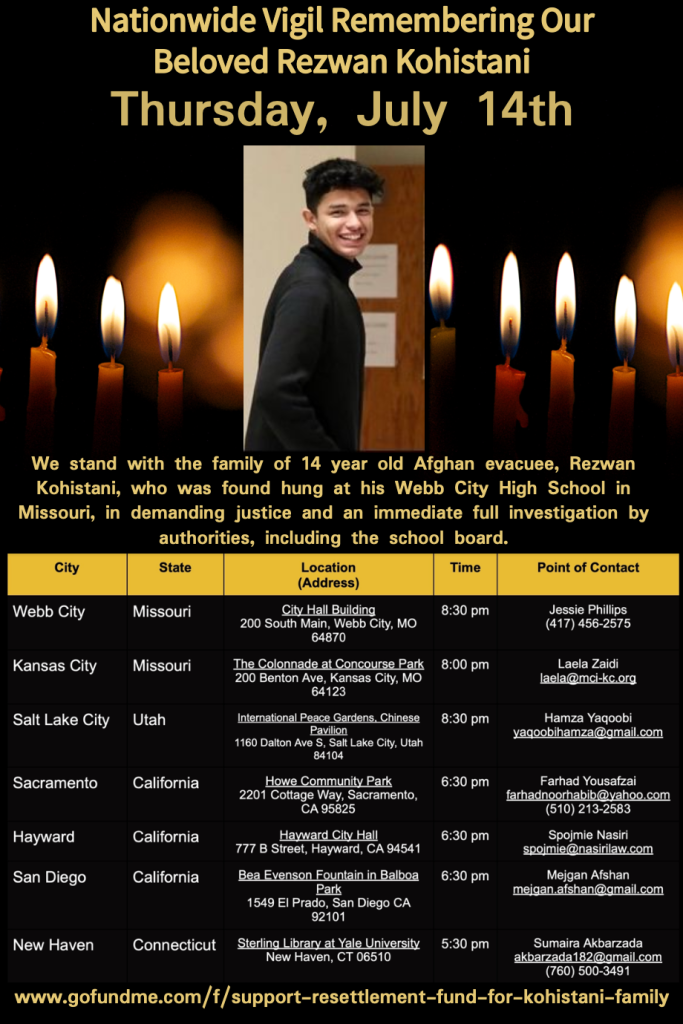