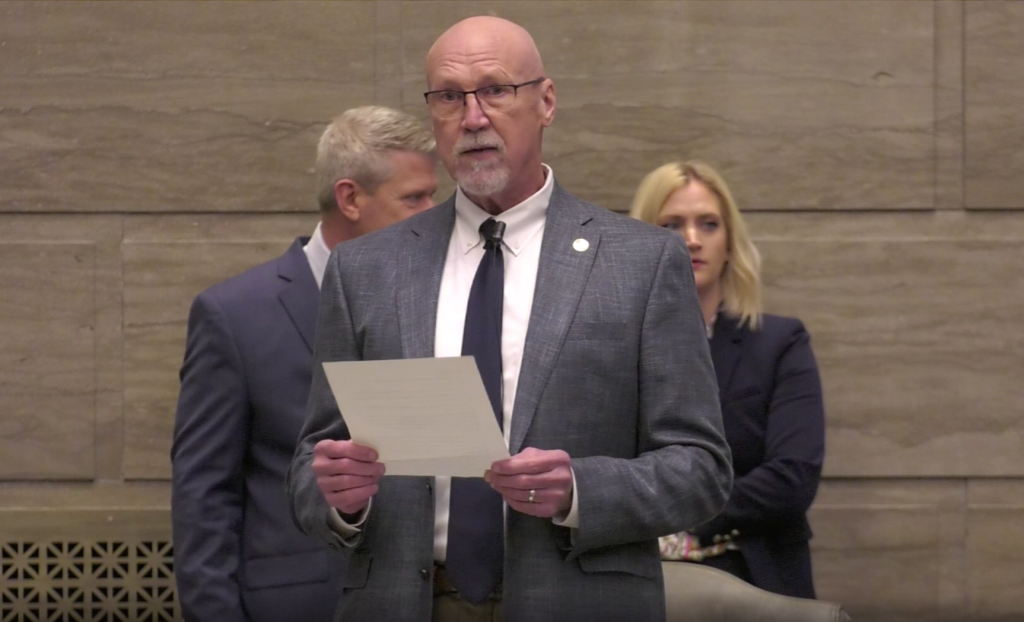 Tension among Republicans that has mired the Missouri Senate in gridlock over the last two years bubbled up again this week, as a GOP state senator and an adviser to the conservative caucus took aim at each other in dueling radio interviews.

“They call it the conservative caucus,” Cierpiot said. “It’s more accurate to call it the chaos caucus.They are dead set on being obstructionists.”

He accused the caucus of being duplicitous in how it handled congressional redistricting, publicly saying the fight was over a more GOP friendly map when instead “they wanted things to help their potential political goals at some future date.”

And Cierpoit said the caucus is being bankrolled by trial attorneys, who are dead set against having a functioning Senate in order to block any tort reform from passing.

Cierpiot said he’s been called a “RINO,” or Republican in Name Only, based on a scorecard put out by a political action committee seeking to expand the conservative caucus in GOP Senate primaries called 100 PAC.

The 100 PAC is run by Jim Lembke, a former conservative caucus staff member.

“It is full of lies,” Cierpiot said of the scorecard. “Jim Lembke lies as easy as he breathes. But people back home don’t understand that.”

Cierpiot also heaped scorn on Missouri Right to Life, which sided with the conservative caucus by endorsing challengers to each incumbent Republican senator on the ballot this year, including Cierpiot. He singled out the organization’s legislative liaison, Susan Klein, and chairman, Dave Plemmons.

“For the next four years,” Cierpiot said, “Missouri Right to Life is not welcome in my office until they fire Susan Klein and Dave Plemmons. Those people have no trust amongst the majority of senators.”

The next day, Mundo interviewed Lembke, who said trial attorneys support the conservative caucus because they’ve found commonality over defending the 7th amendment of the U.S. Constitution, which protects the right to trial by jury.

“We’ve passed all kinds of tort reform in the last decade,” Lembke said, adding: “We have to be careful to protect the rights and access to courts for the people.”

Lembke said he was “saddened” by Cierpiot’s interview, because he “sounds like an angry  man.”

He noted that while Cierpiot emerged victorious in the GOP primary last week over two opponents, he failed to win more than 50% of the vote.

A lot of Republicans “said one thing during campaign season,” Lembke said, “and went to Jeff City and voted a different way.”

Republicans hold supermajorities in both the House and Senate.

But as GOP infighting intensified over the last two years, the 34-member Missouri Senate became split into three factions — the seven-member conservative caucus, 17 senators aligned with Republican leadership and 10 Democrats.

Throughout the 2022 session, conservative caucus members used parliamentary maneuvers to gum up the Senate and, with their priorities failing to get traction, turned otherwise anodyne bills into vehicles for controversial amendments pertaining to transgender student athletes and vaccine mandates.

The radio skirmish this week between Cierpiot and Lembke is also not the only time the two have quarreled.

In February, Cierpiot rose during Senate debate to introduce a special guest, a custom in the Senate that normally involves announcing visits from school groups, constituents or perhaps family.

Instead, Cierpiot lashed out at Lembke, calling him the “puppet master” of the conservative caucus.

Cierpiot’s words so enraged a member of the conservative caucus, Republican Sen. Bill Eigel, that the two got into a shouting match later that day and had to be physically separated.