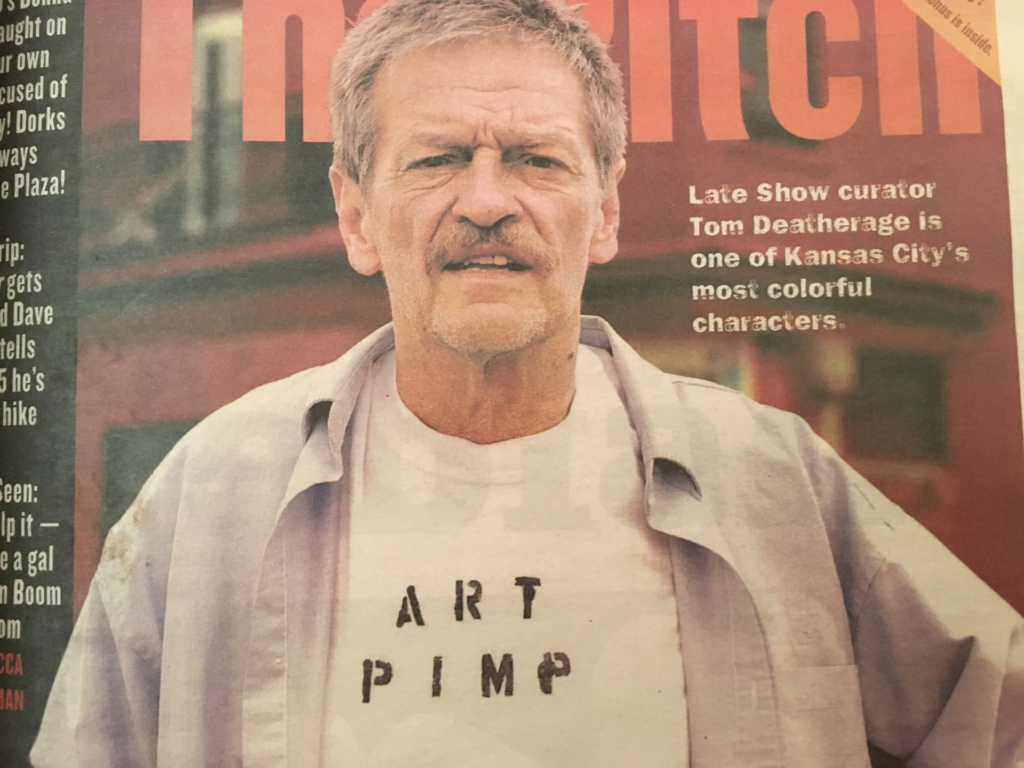 Every year, sometimes month after month, Tom Deatherage would say, “I’m going to close the gallery.” Not enough sales. Not enough press. He would growl his complaints, threaten to be gone. Well, the Late Show Gallery — the building at 1600 Cherry where Deatherage worked and lived — has finally come to a crossroads. Deatherage died Tuesday, reportedly among friends and at peace. He was 74. (C.J. Janovy, who published a profile of Deatherage during her tenure as The Pitch‘s editor, has a fine appreciation on KCUR 89.3’s website. That 2005 Pitch story is worth revisiting, too. It’s here.)

The Crossroads iteration of Tom’s Late Show Gallery — named for a 1977 cult movie, I think he once told me — opened in June 2004. It’s a place many of us cherish. Despite Tom’s rough personality (also because of it), the Cherry address made a welcoming home for casual parties, patio conversations (always with cocktails) and, of course, some of the best art to be found in our city.

My first memory of Tom involves a Mardi Gras event, an early version of the local art community’s now-classic parties, complete with krewes, costumes, a parade, and maybe a car set on fire. I don’t trust my memory about that burning car — maybe it wasn’t that year, which I recall as 2002 — but I do know that I was with someone I would end up marrying, and he was a particularly bad date that night because he found himself in a shouting match with Deatherage. Yes, of course alcohol was involved. Mardi Gras. Artists. Tom. Tom’s bad side (or the part that could bring out someone else’s).

Deatherage was trying to recruit my future spouse to be part of a show, but this meant rebuilding a bridge. Sometime in what seemed to me the distant past (the 1990s), there apparently had been a misunderstanding. Back then, Deatherage ran his gallery out of a house in Hyde Park, and his decisions about when and whom to exhibit could, and often did, turn on a dime. And if one of Tom’s game-time decisions had affected you at some point? There might be shouting later.

My last memory of Tom was about three months ago, when I stopped at the Late Show on a Saturday (regular gallery hours) to see Travis Pratt’s show. Deatherage was not well that day, and when an already grouchy person given to salty language (that’s an understatement) is curt and quiet, you know better than to linger. That afternoon was a contrast to a visit we’d had last September, when I went to see Colby Smith’s show at Tom’s, and he was gracious and open and, as usual, working on the next show he’d curate. Sure, plenty of language was flung around — Tom was never shy about his history, habits, loves and motivations — but the words came from warmth. This curator, given to referring to himself as “Art Pimp” or “Art Daddy,” knew how to make someone like me — awkward, struggling as so many of us do with feeling valid in our work — feel at home, as though we were related.

Tom loved the family he made for himself this way, and the Facebook tributes pouring over his page right now catalog the wide scope of people who loved him.

Besides that love for Tom, what those people, those artists and members of the arts community here and beyond, have in common is that we hate cancer, and we hope Tom rests well now. We hope he finds all the sailors and art and booze, etc., he can handle in the afterlife. I don’t know if he had regrets. One of mine now is that I never got on Tom’s bad side.