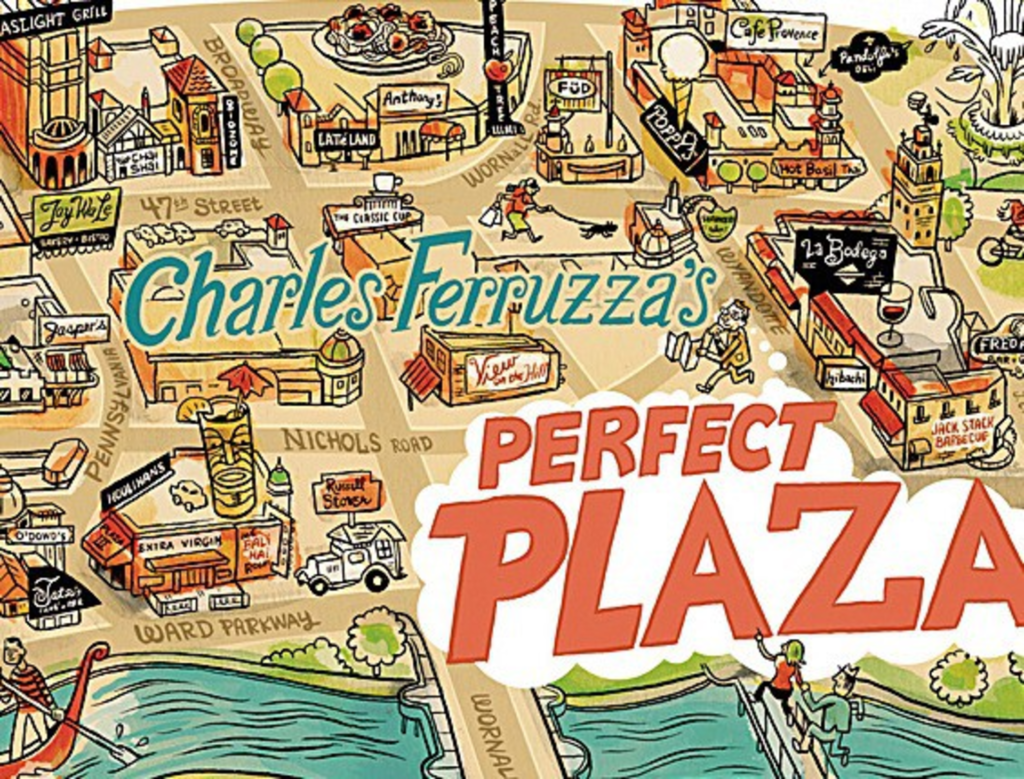 After downtown Kansas City’s once-vibrant restaurant scene fizzled in the 1960s, and before first-rate dining venues opened in the Johnson County suburbs — the archaic liquor-by-the-drink laws in Kansas stifled restaurant growth until the 1980s — the Country Club Plaza was the best place to get a great, distinctive meal in the metro.

The Spanish-style buildings on the north side of Brush Creek were irresistible to restaurateurs. Joe Gilbert and Paul Robinson opened the neighborhood’s first upscale steakhouse, Plaza III, in 1963. It’s the oldest restaurant still operating on the Plaza, having outlasted Gilbert and Robinson’s Annie’s Santa Fe, the Bristol Café & Bar and Fedora Café & Bar. It also outlived the original 1972 location of Gilbert and Robinson’s casual-dining flagship, the sexy saloon and dining room called Houlihan’s, named for the men’s clothing store that once occupied the space.

True, Gilbert-Robinson evolved into a national dining chain, owned by corporations outside Kansas City, even as it continued to dominate the Plaza’s culinary scene. But there was still a strong presence by independent operators: Don Pepe, La Mediterranée, Harry Starker’s, House of Toy, the Alameda Roof and the Colony Steakhouse, to name a few. The Plaza felt like a neighborhood with Kansas City restaurants. No more.

Today, only 16 of the Plaza’s 39 culinary operations are locally owned. Most of the food chains in the 15-block shopping district are the same places found in shopping malls around the United States. They’re popular restaurants and probably terrific tenants, but they’ve made the historic Country Club Plaza — the first suburban retail center in the nation designed for shoppers who arrived in cars rather than on public transportation — an Anywhere, U.S.A., meal rather than a Kansas City experience.

Don’t get us wrong. We really like some of the Plaza’s chain restaurants. (Brio Tuscan Grille comes to mind.) But we wonder what the Plaza would look like if its landlord, North Carolina-based Highwoods Properties, called a moratorium on corporate chain restaurants and leased space only to local, independently owned restaurants.

So take a stroll with us through a re-imagined Country Club Plaza. On the map, we’ve kept the locally owned restaurants but replaced franchise operations with new tenants: some metro favorites we think belong on the Plaza.

Brio Tuscan Grille (500 Nichols Road) becomes a new Jasper’s Ristorante, the upscale Italian trattoria operated by the Mirabile family for 57 years. The sprawling dining room gives chef Jasper Mirabile Jr. a lot more room to create his tableside mozzarella cheese. Or, better yet, return all of the dishes that were once prepared tableside at the
original Jasper’s: Caesar salad, steak Diane, cherries jubilee.

California Pizza Kitchen (4743 Pennsylvania) is located in the space occupied for more than two decades by the original Houlihan’s Old Place. We hereby return Houlihan’s, now with satellites throughout the metro, to its former home but insist that all the classic 1970s dishes come back, too, including escargot, omelets and “crepe Alaska.”

The Capital Grille (4740 Jefferson) is an elegant steakhouse, but many Kansas City residents have never gotten over losing the original Bristol (and its gorgeous dome), dismissed in 1995 to make way for a vulgar, gaudy seafood shack called Jules. (It promptly failed, making way for Capital Grille.) We bring the Bristol — stained-glass dome, drop biscuits and all — back to Jefferson Street from its Leawood location.

The Cheesecake Factory (4701 Wyandotte) is in the space once occupied by a department store. Because the décor of the two-story dining venue is already wildly dramatic, why not give it an exotic menu, too? Enter La Bodega, with its collection of Spanish and Moroccan dishes.

Coal Vines Pizza & Wine Bar (618 Ward Parkway) is in the space occupied, many years ago, by Le Bonne Bouche patisserie and bistro. Why not return it to its Gallic roots with a much more spacious version of Jef Dover’s tiny North Kansas City bakery and lunch spot, Le Monde? An even more delicious idea would be to combine the baguettes, croissants and delicate pastries from Le Monde Bakery with the French-inspired lunch and dinner dishes served at Tatsu’s restaurant, the Prairie Village bistro created by chef Tatsu Arai. The Plaza needs a sexy French restaurant, and Arai’s signature dishes — escargots de Bourgogne, potage de crabe au sherry, suprême de poulet teriyaki — would make the right bank of Brush Creek feel like the Left Bank of Paris.

Cold Stone Creamery (114 West 47th Street) is out, in favor of the house-made ice creams and sorbets of Poppy’s Ice Cream & Coffeehouse in Lee’s Summit.

Houston’s (4640 Wornall) has been a mainstay of the Country Club Plaza since it took over the old Putsch’s Cafeteria space in the early ’90s. We say it’s time to revive the multiple-choice concept here and turn it into a new location of the beloved, family-owned Peachtree Buffet.

M&S Grill (4646 J.C. Nichols Parkway) is a pretty dining room. With a few new toile curtains and some French linen tablecloths, it would make an even prettier Café Provence, the alluring café and bar created by chef Patrick Quillec in Prairie Village.

McCormick & Schmick’s (448 West 47th Street) became the Plaza’s premier seafood restaurant after the Bristol shipped off for the suburbs. In a reversal of fortune, we replace McCormick & Schmick’s with one of two independently owned Johnson County concepts. It becomes either the Plaza’s only real jazz club and restaurant, the Gaslight Grill, or an urban incarnation of 77 South, Leawood’s combination dining room and disco. However it works out, patrons swing to hot sax or shake their groove things under the stained-glass dome in the lounge.

The Melting Pot (450 Ward Parkway) gets the skewer, in favor of homegrown Extra Virgin, the stylish Crossroads restaurant created by chef Michael Smith and his wife, Nancy. The Smiths could create an extra-special environment out of that basement boîte.

Noodles & Company (504 Nichols Road) was a McDonald’s before the Plaza kicked Ronald McDonald out of his longtime home and replaced him with this Colorado transplant. In our Plaza, low-priced burgers return, with the first Plaza location of Town Topic. Open 24 hours, of course.

Ruth’s Chris Steakhouse (700 West 47th Street), from Florida, was the first seriously upscale steak palace — from out of town, that is — to herd high-priced beef to the Plaza. But the neighborhood needs a cheaper steakhouse, so how about moving in the Laffoon family’s moderately priced Frontier Steak House, a Wyandotte County fixture for a half century? And yes, this restaurant’s “Biker Night” comes along for the ride.

Scooter’s Coffeehouse (446 West 47th Street) percolates itself out of the building and is replaced by a Plaza location of the Brookside Pakistani café, Chai Shai.

Starbucks (302 Nichols Road) is in the space formerly occupied by the locally owned Emile’s German Restaurant. Although the Starbucks is one of the busiest in the city, it lacks individuality. We think the location screams for the Plaza’s first openly gay bar, a transplant of KCK’s View on the Hill. The View isn’t fabled for its food, but we’re betting that the shady outdoor deck, overlooking Halls department store, would be more festive than ever.

As a final note, the first restaurant to open on the Country Club Plaza, in 1924, was The Grillette inside the Wolferman’s Fine Food Market. The store, located where Commerce Bank is now at 47th Street and Wyandotte, was a combination fancy-food market, small restaurant and soda fountain. The Plaza sure could use another one of those today.