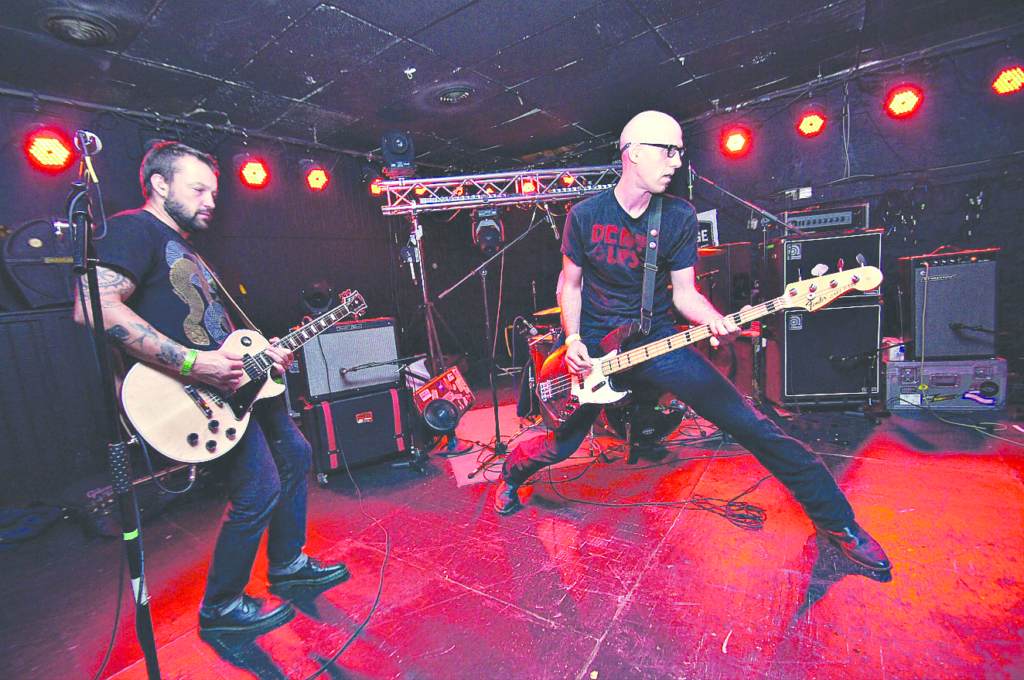 To be fair: A green T-shirt did peek from beneath the black button-up worn by L. Ron Drunkard, the band’s singer and owner of maybe the most preposterous stage name in the city. But that hint of green was incidental. There’s a lot of Irish in the band, but Red Kate appeared uninterested in what corporate America has rendered a kind of Valentine’s Day for beer.

The band was at Vinyl Renaissance in Overland Park for a one-band, early evening gig. The crowd was sparse, the fluorescent lights seemingly too bright for a rock show, but no matter. Red Kate’s greaser-tinged prog punk blasted through the shop’s open door and rattled the green-beer-infused pedestrians who strolled the sidewalk outside.

Red Kate did have cause to celebrate. The Vinyl Renaissance gig served as the unofficial kickoff for what will be a few weeks of shows in support of the band’s latest album, a split EP with Lawrence’s Stiff Middle Fingers. Aside from representing the first new music from the band in nearly two years, the record is also the product of what the band hopes will be a repeatable process for more low-profile Midwestern punk acts.

The release is the second on the band’s own label, Black Site. In a scene where longevity is rare, Red Kate has been jolting listeners for a decade, and in that time the band’s founding members have acquired things young underground bands typically lack — full time jobs, families, homes. So, having outgrown the youthful DIY scene from which the band’s members emerged, Red Kate’s members have conjured Black Site to give back.

“All the indie hipster people are going to ignore you, because you’re too hard or too something,” Drunkard said, describing the bands he envisions on Black Site’s roster. “Something about you doesn’t fit the model they want for indie music.”

We were talking a week before the Vinyl Renaissance gig, Drunkard at a stool inside a nearly empty at Fric & Frac, on West 39th Street, his head in his hands. It was late afternoon during a break from a day full of errands, and he was flustered because a member of some local band — does it really matter who? — had been complaining about Hopcat, the paint-by-numbers chain beer pub that just opened on the corner of Westport and Broadway. As it turns out, Drunkard explained, the band had one of its songs used in one of the bar’s promotional videos. Drunkard was incredulous.

“It’s the kind of shit that just drives me nuts about the music business and integrity and whether anybody has any anymore, and whether it matters, whether it fucking matters,” Drunkard said. The bartender came around, and Drunkard ordered some tater tots.

The economics of the industry: That’s what gets to Drunkard. He understands selling out, he told me — most everyone has “sold out,” in the antiquated sense of the phrase. But Red Kate is by its very nature an anti-corporate band. Drunkard comes from a union family; his parents, his aunt and his sister were all teachers’-union members at one time. Two of his uncles were Teamsters. And his grandparents were Kansas farmers — the kind of good, solid progressives made in the mold of the pioneers who first claimed this hunk of prairie. So there’s an ethical code embedded in Drunkard’s music and in his life, and to him that code is unassailable. That means eschewing corporate influence in favor of industry built locally, by those who actually craft the art. As the old saying goes: It’s DIY or die.

This is where Black Site comes in. The vision for the fledgling label is less a music venture than it is a virtual punk commune, allowing bands from Kansas City and farther afield to collect their labor in the pursuit of an independent but organized ecosystem.

The idea for the label arose, as record labels often do, because of the band’s own need to put out an album. After Replay Records put out Red Kate’s first full-length, 2013’s When the Trouble Comes, the band was left searching for a way to put out its follow-up two years later. “We were in a situation when we were trying to put a physical product out, not just online,” Andy Whelan, Red Kate’s drummer and founding member, said.

Sitting at Fric & Frac, Drunkard waxed on about the importance of the physical product, particularly in a world that strands thousands of songs unheard on Spotify. Finding truly new music online without an algorithm has grown increasingly difficult. So a band that produces a physical recording of its music, especially on vinyl, has, Red Kate believes, the potential to transcend any one fan’s music collection. The disc can move from one shelf to the next, indefinitely.

Following the split with Stiff Middle Fingers, Drunkard and Whelan plan to release a new EP from Kansas City punks Wick & the Tricks. There’s talk of reissuing music from long-gone Kansas City-area bands. After that, they’ll see, Drunkard said. The minimum run of records is 500, but, unless the name on the spine is Madisen Ward, most local bands strain to sell that many albums in Kansas City alone. For acts whose underground bona fides are in keeping with Black Site’s ethos, the number is smaller still.

But the idea for the label stretches beyond pressing records. There’s talk of a kind of podcast proto-network, beginning in Kansas City and growing to include other local-music hubs, for which contributors could assemble playlists of local and touring bands to help promote records, get kids to the gigs and so on. Whelan said he also wants the label to solidify the area’s informal network for touring bands trying to book shows around the Midwest.

Whelan, who played in bands around the east side of Missouri for years before moving to Kansas City, said he sees the relationships between bands in different cities as uniquely Midwestern. “I’ve always been into this kind of regional thing,” he said. “We’re all on these islands, and the ocean is a little farther away.”

Where East Coast bands can easily travel from New York to Philadelphia to D.C. over a weekend to play gigs, in the Midwest a full day’s drive is often necessary just to get to the next gig. Around here, the network of bands stretches hundreds of miles, down the Interstate 35 corridor from Minneapolis to Kansas City to Dallas, and east and west from Denver to St. Louis. Black Site, Whelan said, could serve as a hub for organizing bands in those cities to book gigs, arrange tours and generally navigate the music world from their isolated islands.

Anyway, the bandmates told me, that’s the right thing to do. So, too, is the band’s other mission: Convincing their local comrades in the underground music scene to use local makers and print shops as much as possible. At the moment, the band uses Callender Printing, a union print shop on the Kansas side, for their 7-inch covers, and had its second LP pressed at QRP, in Salina. LFK Press in Lawrence prints Red Kate’s labor-soaked artwork on union-made shirts. Now, Ven Smith, Wick and the Tricks and Stiff Middle Fingers use Unite Here shirts as well.

When Drunkard moved back to the Midwest from California, in 2006, he entrenched himself in labor issues and helped found the Kansas City chapter of Jobs With Justice, the labor-rights organization. Red Kate has become a vehicle for Drunkard’s interest in those issues. Black Site will be no different.

“We have to figure out a way to start realizing that the only way that we’ve got what we have is because people have put aside their personal needs and they’ve worked together for the common good,” Drunkard told me. He was talking about unions, but labor is labor. Corporate control is that old world — that green beer, that soundtrack for a restaurant commercial. And that old world is good only for its ashes.