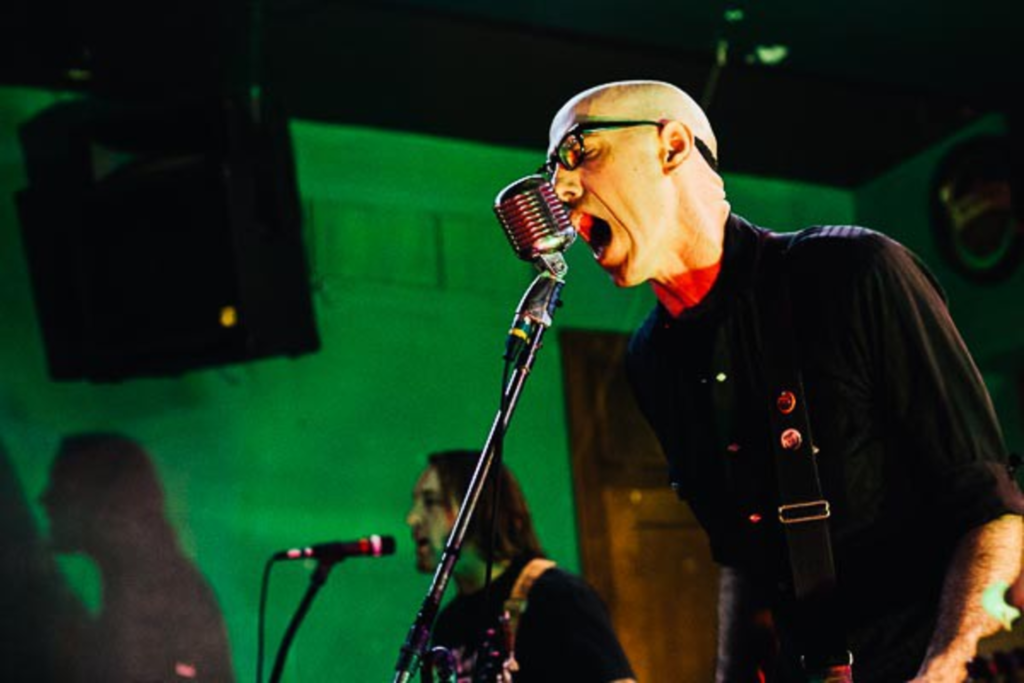 Harlings was an appropriate choice for the Bad Ideas and Red Kate as the venue for the release of the split 7″ from the two bands. (The record is the premiere release by Mills Record Co.) With the right crowd, the upstairs bar has the closeness and the muggy intimacy of a packed basement show. Such was the energy last night, as a healthy mob of people swarmed the bar, filled the seats and lined the walls.

It was a well-curated lineup, with Brooklyn’s Crushed Out and St. Louis’ Bruiser Queen kicking the night off before the local Kansas City talents of Faultfinder, the Bad Ideas and Red Kate took the stage. On the surface, Crushed Out – a surfy psych-pop duo with a western twang here and there – was an odd band for the bill, but they set the night up easily and segued well into the ragged garage rock of Bruiser Queen. Morgan Nusbaum’s voice is deceptively sweet sounding, like a carnivorous plant that might eat you alive the moment you turned your back. 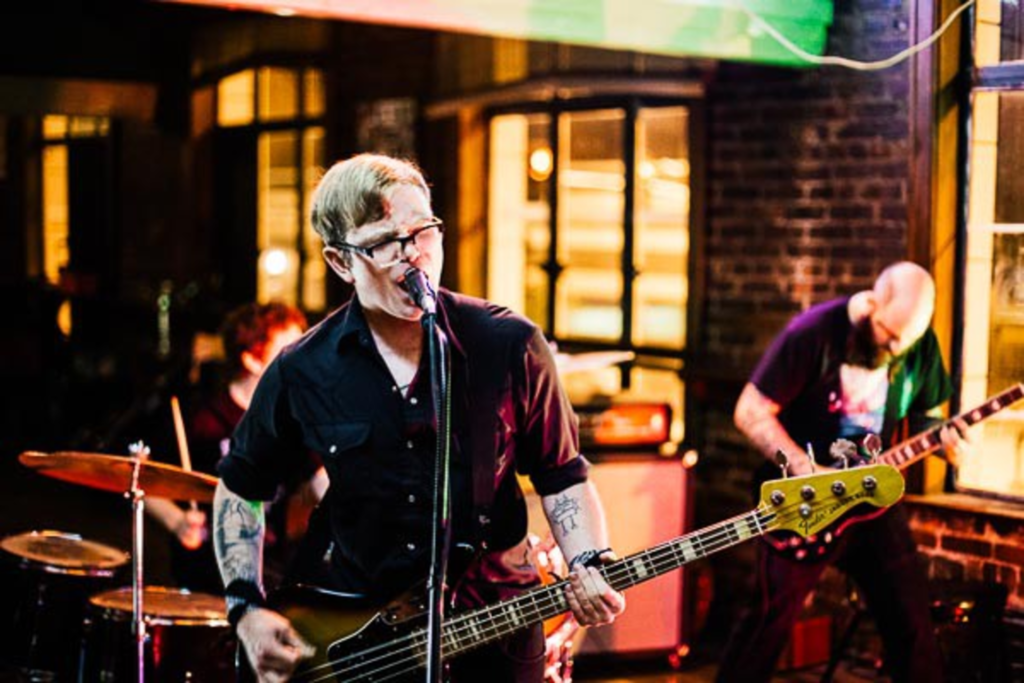 Faultfinder, though – that’s the kind of band that either gets the party started or scares away all the partygoers. Luckily, everyone gathered at Harlings seemed to be well prepared for the foursome’s aggressive, hellish punk rock. Ninjak’s voice is jagged and guttural, the stuff of nightmares, and it suits the breakneck pace that Faultfinder keeps. Guitarist Steve Shoup seemed to burn through his guitar strings in in “Pay Up” as bassist and lead vocalist Mookie Ninjak screamed to his audience: Anything you want, you can have it all! It seemed the crowd wanted nothing more than to have its ears blown off, and Faultfinder was more than happy to oblige.

The nice thing about Harlings is that there is zero separation of the band and the audience. There is no stage, so eager listeners can get as close as they’d like – though, with the exception of one very interested dude who stood directly in front of Ninjak’s microphone, the crowd gave Faultfinder a few feet for an invisible barrier. 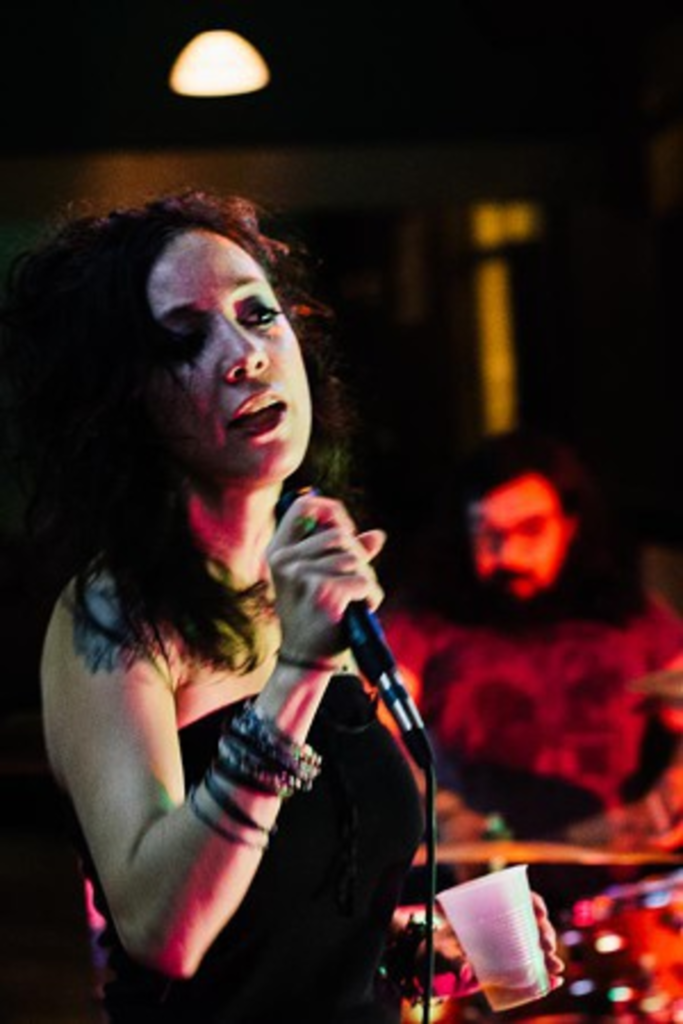 That barrier vanished when the Bad Ideas began to play. The female-fronted quartet has a fierce magnetism, and in a live show, they hold nothing back. Dawn, the wild-haired lead singer with no last name, is a petite fireball whose voice seems to rip out of her. She stood on top of a pile of papers scribbled with song titles and lyrics, though she didn’t seem to need them.

“This song is called ‘On the News.’ It’s about how the media tells you what to think,” Dawn said a few songs in. She took to introducing nearly every song that way, setting the rapturous audience up to feel what she was feeling – a helpful tactic, given that Dawn’s lyrics were sometimes lost in the frenzy of smoking guitars and manic drumbeats. 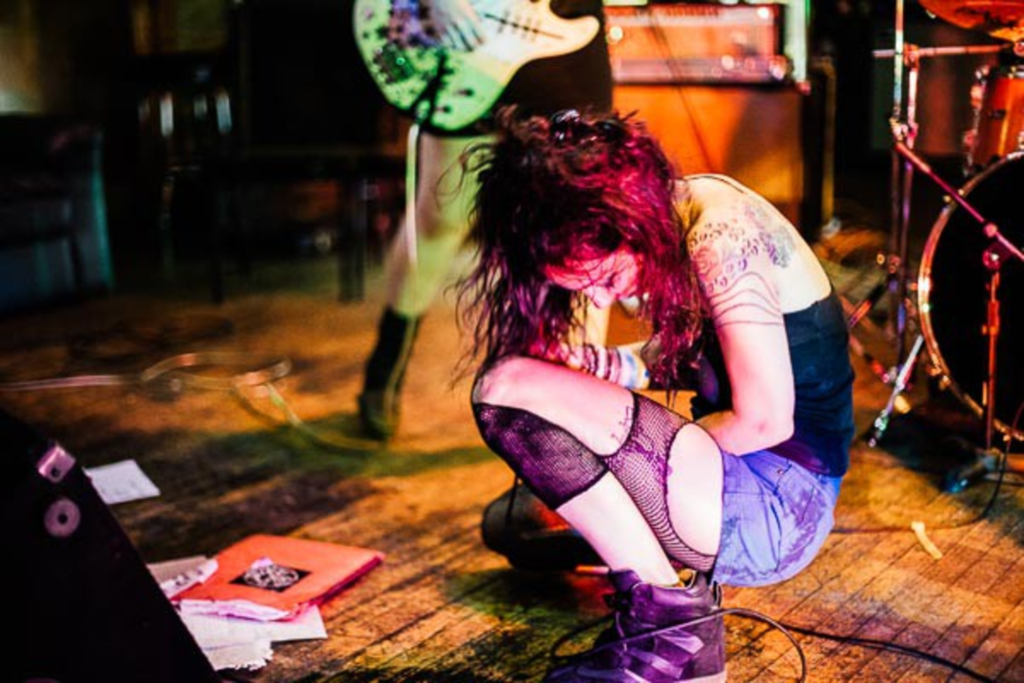 Mostly, though, the Bad Ideas invite you to get angry with them. You’re so normal, Dawn yells ruefully in the song “Normal.” What’s it like to have everything you want in life? Grasping the microphone, Dawn charged into the shaking crowd, shoving her way through a pair of linebacker-sized dudes, demon-eyed and confrontational like a crazed ex-girlfriend who wouldn’t hesitate to burn your clothes for the slightest offense. The audience joyously threw her around, shoving her back to the stage eventually. 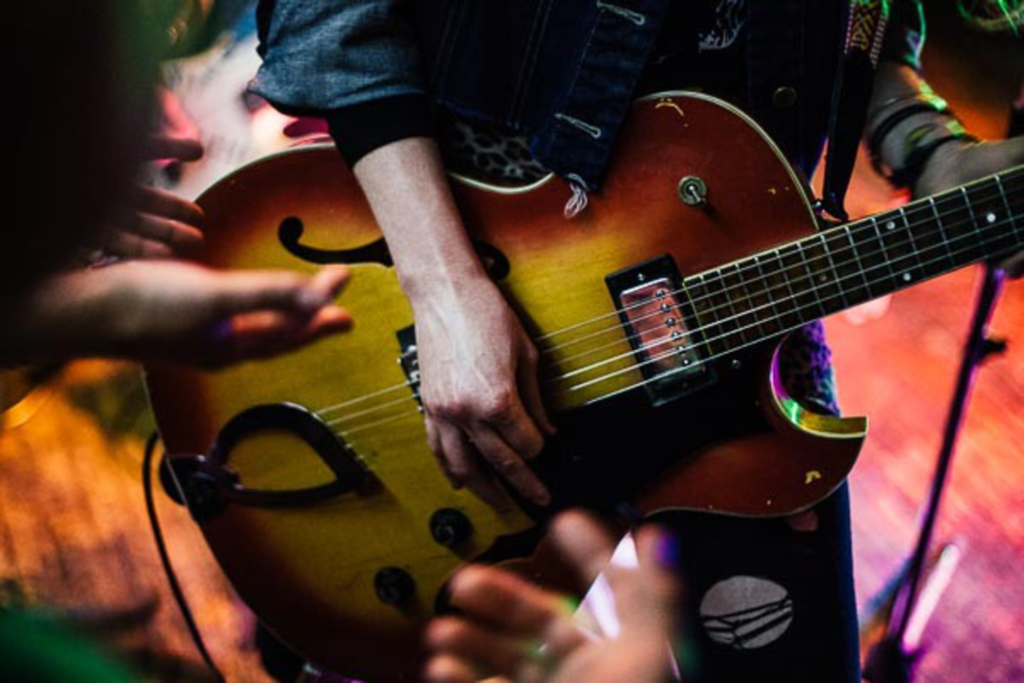 Later, on “John Henry,” guitarist Britt Adair – a tall, lithe woman with pink-blonde hair and glasses that seem perpetually in danger of falling off her face – took a speed guitar solo into the crowd, and audience members extended their hands to the strings as Adair’s fingers glided along. At the same time, bassist Caitlin Curry folded to her knees, succumbing to the furious rhythm of the song – an ecstatic mess of loudness – while Dawn, too, was on the floor, curled into a ball of triumph. And that was only halfway through the set. 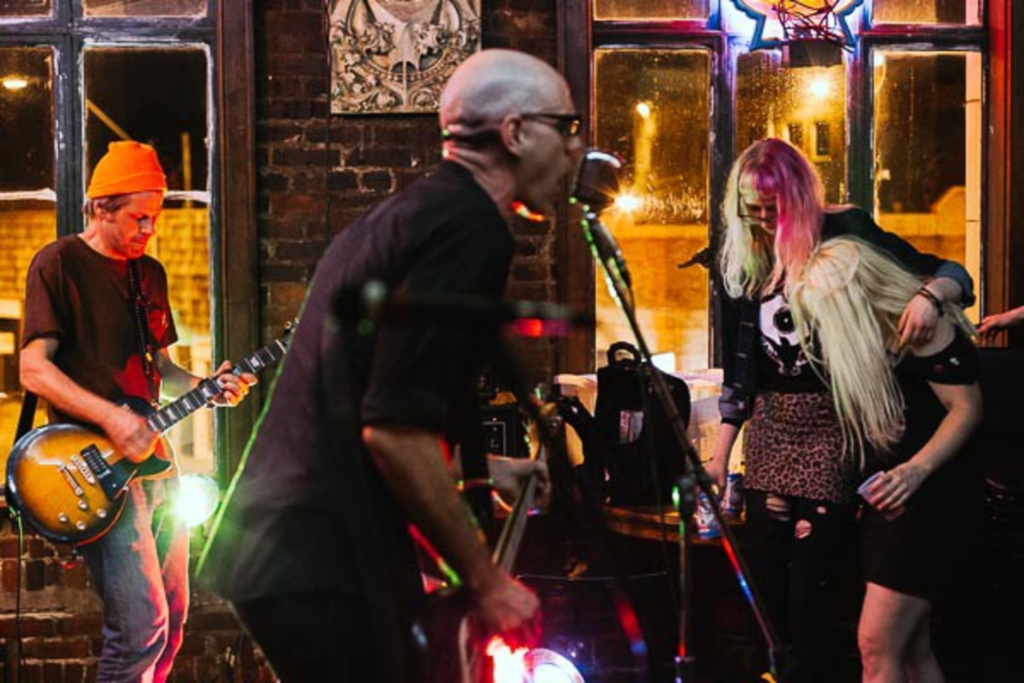 The generous crowd had thinned somewhat by the time Red Kate took the stage shortly after midnight, but the KC punk veterans were unperturbed. Lead singer and bassist L. Ron Drunkard lumbered over a vintage microphone, snarling and growling the band’s heavy songs, and the band played recklessly and exuberantly. And, though there were a few less people, the audience was no less rabid. Red Kate pushed through a set of violent 1970s-era rock smashed against black-and-blue punk swagger, the scene in front of the band was one of euphoric moshing and thrashing.

“There’s so much love in that pit right now,” sighed Mills Record Co. owner Judy Mills, standing near me – and a safe distance from the flinging fluids and frenetic body barreling.