Recapping The Pitch Music Showcase Night No. 2: The Pedaljets, Katy Guillen and the Girls, the Grisly Hand and more 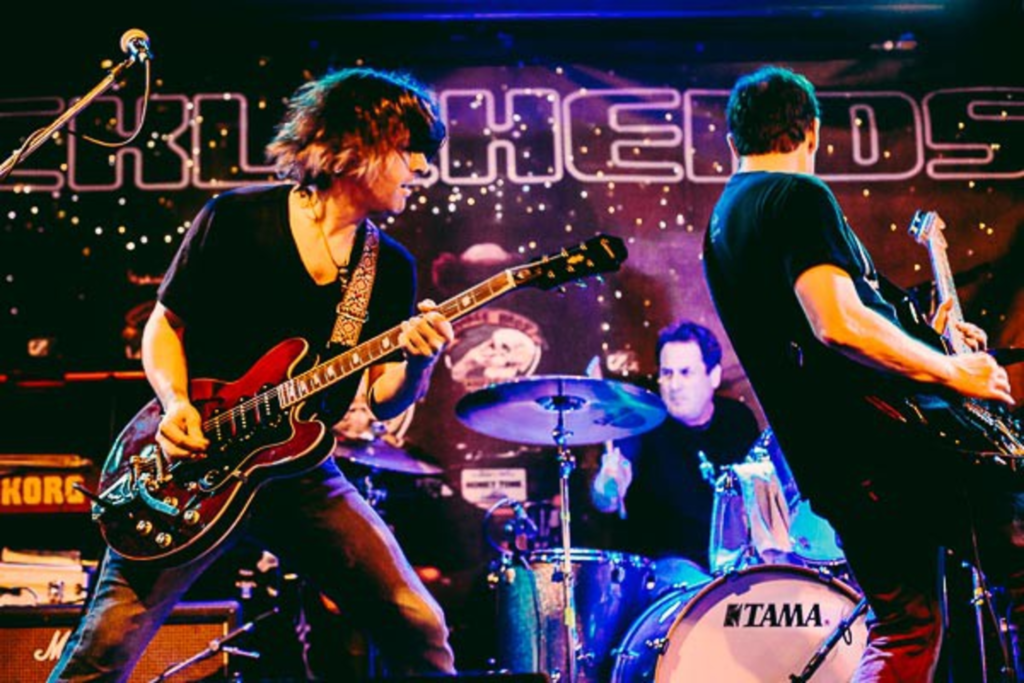 The Pitch Music Showcase Night No. 2
A.J. Gaither, the Pedaljets, Katy Guillen and the Girls, the Grisly Hand, Not A Planet
Knuckleheads, Kansas City
Friday, July 25, 2014

A.J. Gaither could have played the full six and a half hours of The Pitch Music Showcase Night No. 2 if we would have let him. Gaither opened up the evening at Knuckleheads with a set that was as full of sound and energy as the acts that would follow – impressive, considering his one-man-band status.

Gaither, bearded and barefoot, played for nearly an hour on a variety of homemade cigar box guitars with a guitar slide (and, at one point, with his teeth). The early crowd was spotty, but fully appreciative of Gaither’s powerful, reassuring voice – a voice which, at times, sounded eerily reminiscent of a less raspy, less nasal Bob Dylan – as he produced a highly sustainable balance of earthy blues and cornfield country. If Gaither’s stage set-up was uncommon, his lyrics were fairly conventional, falling back on such tried-and-true themes of women, whiskey and weed; this only added to Gaither’s charm, though.

And charm is something Gaither has in equal measure to his musical talents. In a low, roughened speaking voice – it sounds like he’s been gargling with rocks for a decade – Gaither introduced a song that, he said, was about being on the road and being homesick.

“I’m not all just screaming, whiskey and drugs,” Gaither told the audience. “I’ve got a sentimental side that I’ll share with you if I’ve had enough whiskey and drugs.” He smiled as the crowd laughed. “You might ask what I’m doing drunk at six in the afternoon, and I’ll tell you: You’ve never seen my show before.” 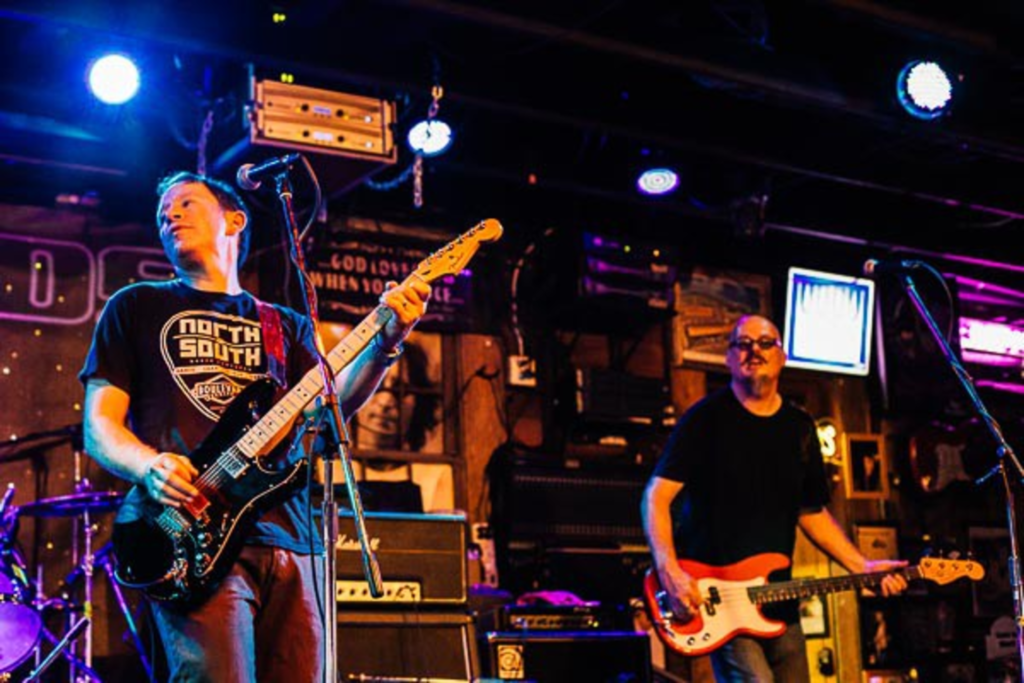 The Pedaljets are nominated this year in our new “Album of the Year” category for What’s In Between – the band’s first new-material release in 23 years (2008’s self-titled album consisted of old cuts). And the band meant serious business from the first song. There was no room for stage banter with the Pedaljets. This band was born in the loud, pissed-off garage rock era of the mid-1980s, and the years have not lessened the attitude that lead singer and guitarist Mike Allmayer pushes into his lyrics.

I wanna punch that fucker right between his eyes, Allmayer sang gruffly in the opening “Terra Nova,” the lead single from What’s In Between. But if Allmayer was stoic throughout the band’s bruising set, his bandmates – bassist Matt Kesler, drummer Rob Morrow and guitarist Cody Wyoming – seemed to relish the limelight.

Wyoming officially joined the band in January, but he plays as though the Pedaljets’ music ran through his own blood. He snarled as he railed on his guitar, delivering a pulsing, frenetic riff; he whipped his hair around during the song choruses. Kesler, looking like a sinister railroad villain in a Western film with his curled mustache and pointed goatee, seemed to delight in delivering his crushing bass lines.

“I opened for them in 1986 at a punk club in Wichita!” I overheard a guy behind me tell his buddy. And, indeed, last night, the Pedaljets brought back the best of ‘80s garage rock – proving that time doesn’t diminish raw talent and great songwriting. 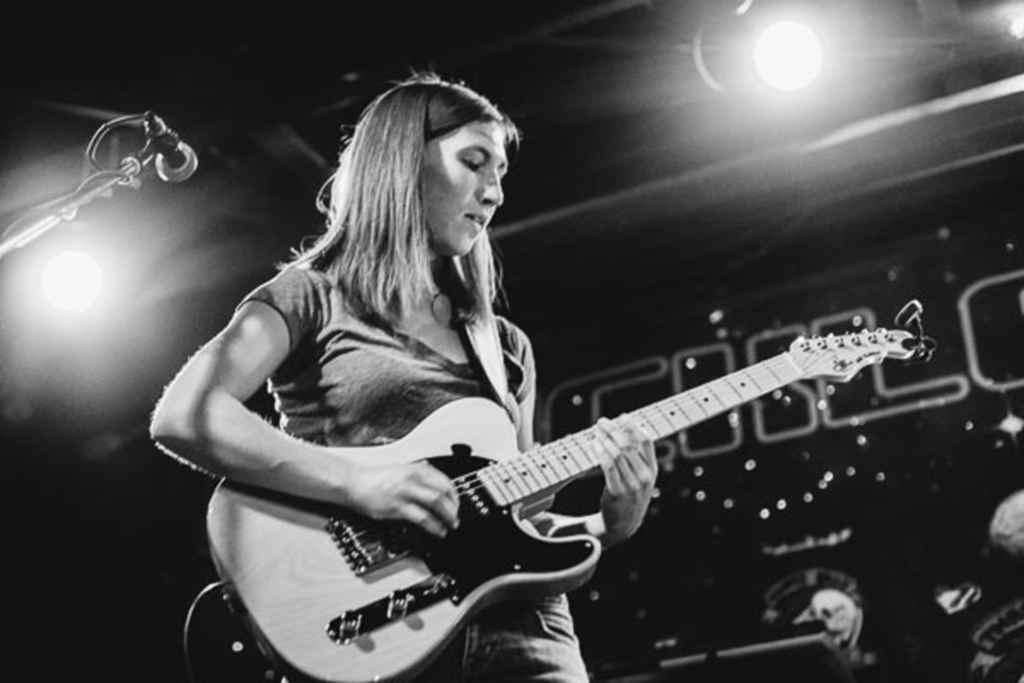 By the time Katy Guillen and the Girls went on, the crowd was properly boozy and ready to obey the “God loves you when you dance” sign bearing down on the audience from the stage. There would be plenty opportunity for that throughout this female-fronted blues band’s blistering set.

In January, Katy Guillen and the Girls competed in the 30th Annual International Blues Challenge in Nashville, placing fourth out of 255 acts (we spoke to Guillen about that experience in February). The skill that took the band that far was on full display last night. It was a joy to watch these players go nuts on their instruments, as guitarist Guillen, bassist Claire Adams and drummer Stephanie Williams stacked one smoldering track on top of another.

Guillen and Adams would often meet in the center to duel out their respective riffs, spectacular and enthralling cuts that would send the audience to rapturous heights. Around me, strangers to this young band turned to each other in disbelief, wide-eyed at this fearsome trio.

At one point, Guillen took the opportunity to announce that the band would be releasing a new album in September, with a show on September 6, back at Knuckleheads. This is welcome news: Up to now, we’ve only had a three-song EP from the group (last year’s ….And Then There Were Three). If the world has any kind of sense, Katy Guillen and the Girls will not be long playing for crowds that are anything less than sold-out.
[page] 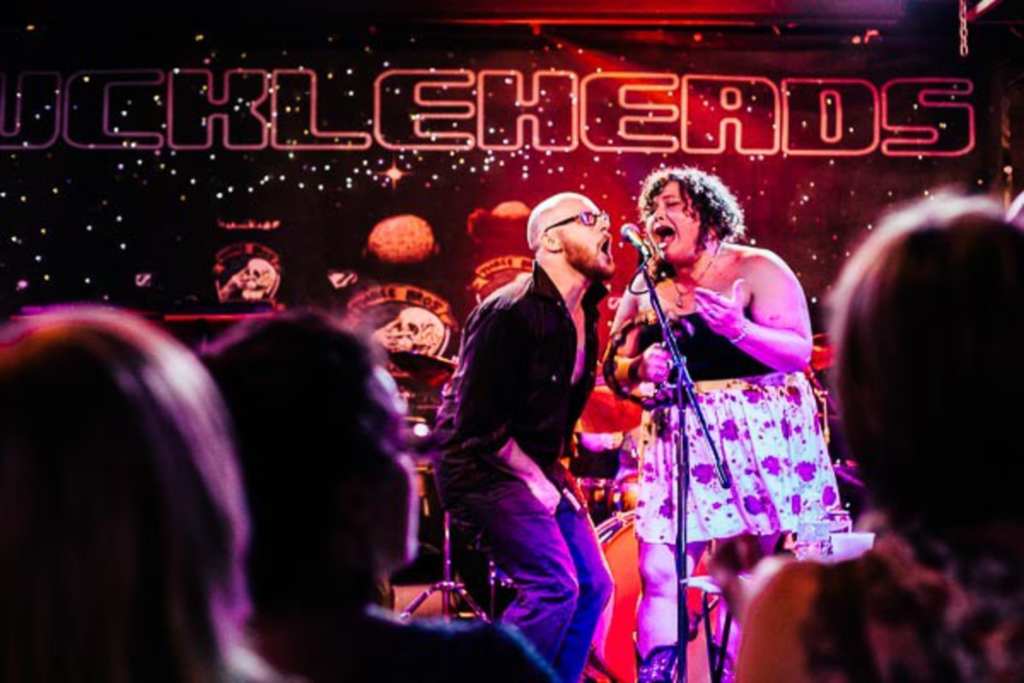 It’s no secret why the Grisly Hand was nominated this year in our “Hardest-Working Act” category: They sweat and they push and they sing and they play and they give until there’s just nothing left to offer a listener. Last night’s set was evidence enough of that, as the five-piece went through a meticulous soundcheck. Lead singer Lauren Krum graciously thanked the crowd for its patience. The reward for this wait: an hour of clear-eyed Americana from one of Kansas City’s most beloved acts.

Krum has the kind of voice that can jolt you awake and get you moving with a quick key change; she’s a little like Dolly Parton in that way, only her twang is more understated than the country godmother’s. And as Krum and guitarist-singer Jimmy Fitzner harmonized like country-born baby angels, there was a healthy mob of people stomping or swaying along – whatever the song called for. 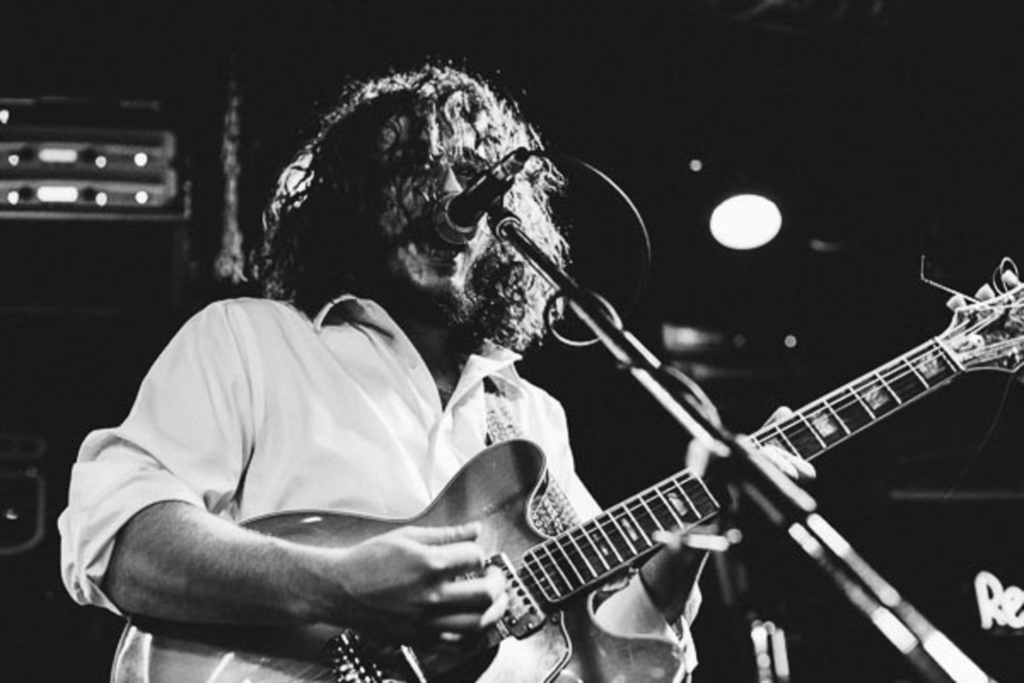 Not a Planet can always be counted on to deliver a show worth sticking around for, and last night at Knuckleheads was no exception. Even as the crowd thinned near the end of the Showcase, the final act kept it classy – and rocked out mightily.

Nathan Corsi is one hell of a frontman. No, seriously – this guy gets your attention seemingly by just standing in front of a microphone and smiling at you. It helps, of course, that Not a Planet delivers a particular brand of high-octane, intergalactic rock. Corsi’s voice is remarkably versatile; from song to song, he stretches it to spacious, powerful heights, almost to a breaking point as guitars build to otherworldly crescendos. There could not have been a better way to close out this celebration of lauded local music.