In Ripley County, residents without internet access couldn’t find a way to sign up for the state’s waitlist when its hotline was unavailable 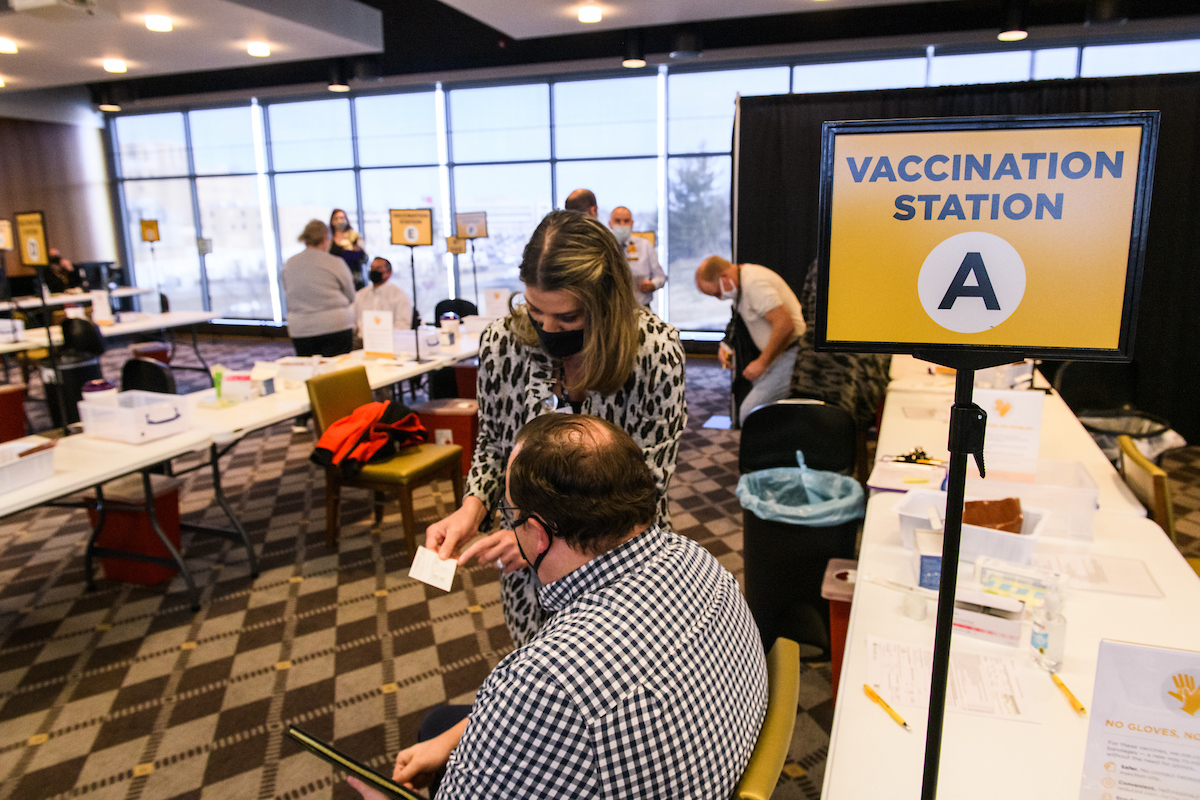 Darlene Davis has been searching for an available vaccine appointment in the Kansas City area at least three times a day.

In her search, Davis, a 77-year old nurse who lives in Independence, developed a routine checking sites online for appointments.

“I go in the morning when I get up at six. I go about five o’clock in the afternoon, because the government has a propensity to do things right before they go home,” Davis said. “And then I go again at midnight, just because it’s the start of a new day and I think that maybe something might open up then.”

Davis had put her name down on nearly a dozen lists. She checked the state’s Vaccine Navigator registry for mass vaccination events, only for her family to veto that option out of concern for the two-hour drive in winter to get to the nearest event in Clinton.

For weeks, her search had been in vain, with no clarity as to where she fell on the many waitlists.

For her, it was a relief.

But Davis’ undertaking highlights the confusion and frustration of many Missourians in search of a vaccine, with some driving hours to more rural communities to find an available appointment.

Meanwhile calls for the state to expand who is currently eligible — and bump up groups like teachers — have grown, even as the state endeavors to get shots to the more than 3 million residents who qualify now under the state’s tiers.

But demand continues to outpace the available supply. For the week of Feb. 15 alone, the state’s website says it received order requests for over 250,000 doses — more than 2.5 times the 93,125 doses it was allocated that week.

It’s a demand that Jan Morrow, the director of the Ripley County Public Health Center in southeast Missouri, sees among her county’s residents. Morrow said she has been told to tell residents to sign up through the state’s centralized registration system, Vaccine Navigator—but that can be a problem for many without internet access.

“Our computer system goes up and down—I don’t know how many times a day,” Morrow said. “We have people 20 miles west of us that don’t have internet that live out in the rural area.”

For those without internet, the state has also set up a hotline for Missourians to call if they need assistance registering for an appointment. But Monday afternoon demand was so high no one was available.

“Due to unusually high call volumes we are unable to take your call at this time,” a recording on the hotline said around 12:45 p.m. “Please call back at a later time.”

That’s when Morrow says her health department usually gets a call from “really hacked off” residents.

“I don’t have the answers for those folks,” Morrow said. “And I feel bad about that, because that’s not what I want for our county.”

Morrow said it’s unclear how the state’s Vaccine Navigator waitlist will integrate with her own of upwards of 600 people. She won’t be getting rid of her department’s list anytime soon as she waits for her next order request for vaccine to be approved.

“While the state may think it’s a great tool, it is a hindrance in this area,” Morrow said of the state’s system.

Where doses are going

From the Kansas City area to rural southeast Missouri, residents across the state are still struggling to find vaccine.

The state has faced criticism from lawmakers from both rural and urban areas who feel their constituents have been left behind, with the St. Louis region in particular calling for a proportionate allocation of doses based on population.

In the first two months of Missouri’s vaccine distribution, Cape Girardeau County received enough vaccine to cover over half of its population, while some other counties—both rural and urban—didn’t have enough doses for even 5 percent of their residents, a county-by-county breakdown of shipments requested by Schupp’s office shows.

Meanwhile, the counties of Clinton and Newtown only received enough doses for about 0.8 percent of their populations.

In a letter sent Feb. 12 to Department of Health and Senior Services Director Randall Williams, Schupp said the data confirmed her fears.

“Not only does the data show these county-by-county disparities, but it also shows regional disparities,” Schupp wrote.

But the data provided to Schupp by the state doesn’t show the full picture.

Not only does it not include doses sent to long-term care facilities, but it also leaves out redistributions of vaccine between facilities and across county lines, the governor’s office said in an email to The Independent.

For five weeks of the state’s rollout, Missouri’s share of Moderna doses were allocated to the federal partnership with CVS and Walgreens to vaccinate long-term care facility residents and staff.

That left only doses of Pfizer’s vaccine, which needs to be kept in ultra-cold freezers at minus 94 degrees.

“That is noteworthy because of the storage and handling requirements of Pfizer that prompted over 100 redistributions from facility to facility, or from county to county,” said Robert Knodell, Gov. Mike Parson’s deputy chief of staff. “Those redistributions are not accounted for on (Sen. Schupp’s) spreadsheet.”

However, according to the state’s dashboard, 12,058 doses had been administered to Cape Girardeau County residents as of Feb. 1 — or about 15 percent of its population. 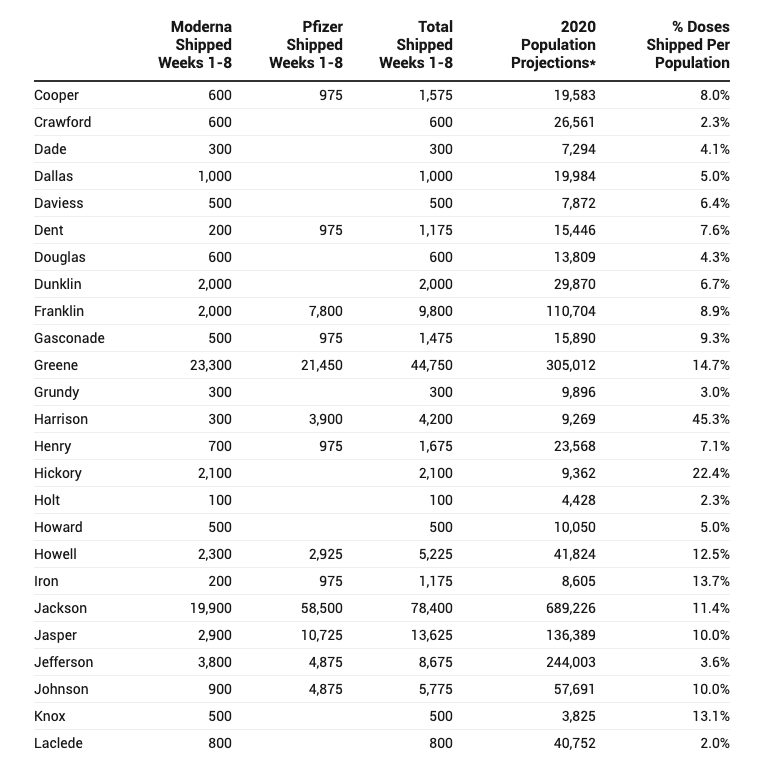 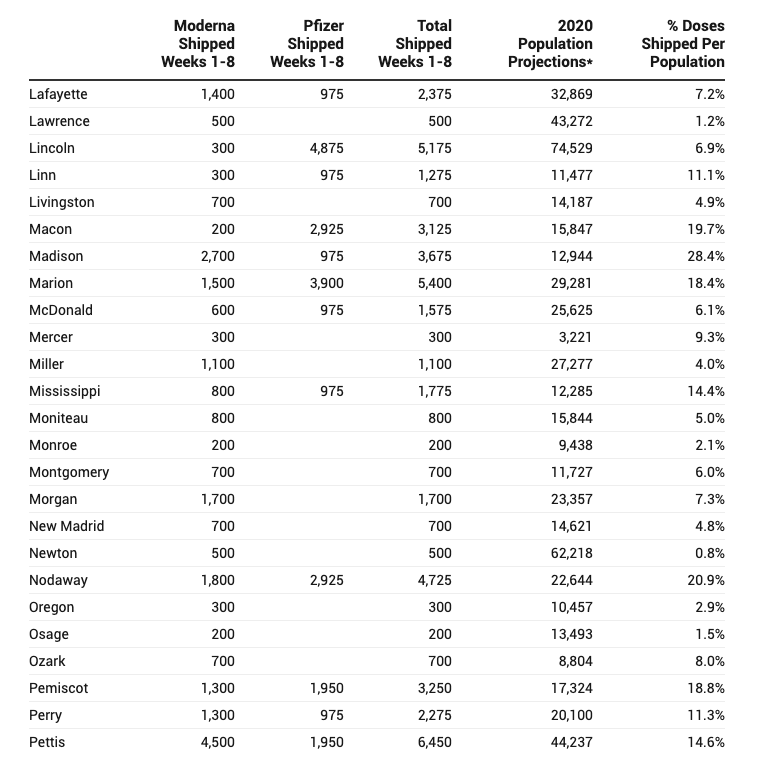 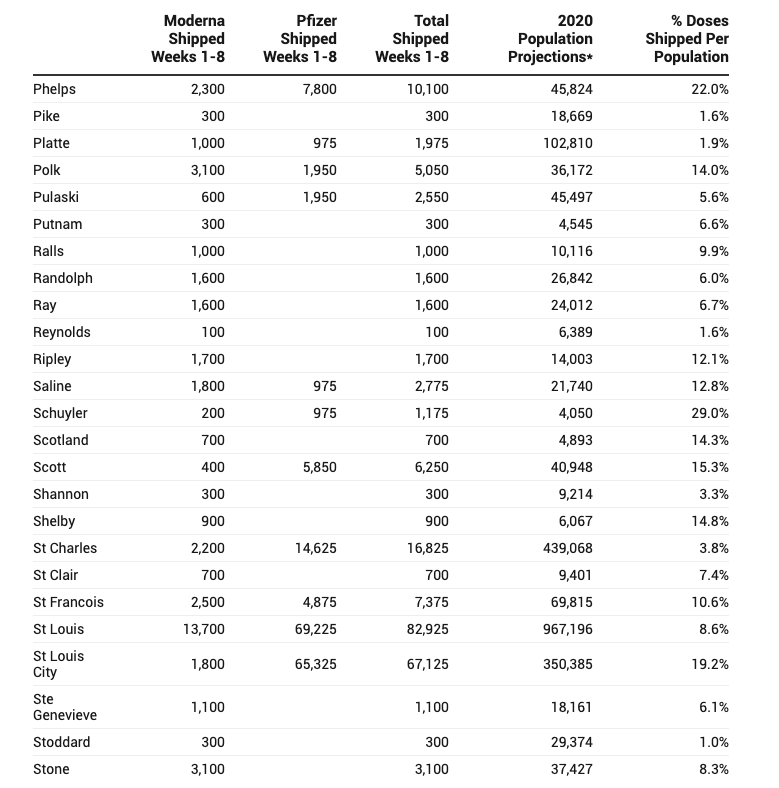 Knodell said it was designed for Cape Girardeau County to redistribute significant fractions of Pfizer vaccine to other counties.

Morrow said her department hasn’t received any redistribution of doses, including from Cape Girardeau County. While healthcare systems in Cape Girardeau are designated as “high throughput” providers for the region, it’s not always accessible to Ripley County residents who have to drive two hours to get there, Morrow said.

For the first time, the state published spreadsheets that detail which providers have requested and received doses and how many. However, redistributions between providers are not accounted for.

Schupp said her office was not provided any caveats to the data, such as redistributions, and that she has yet to receive a response from DHSS to her letter.

Redistributions have been a tool used since the early days of the state’s rollout, and still continue to affect some of the largest health departments.

For example, recently both the Jackson County Public Health Department and St. Louis County Department of Public Health received redistributions from hospitals in their areas after they had both not received direct shipments of the vaccine from the state for weeks.

Schupp said she requested the data to ensure that allocations were occurring based on population like the state said.

Each mass vaccination event supported by the Missouri National Guard has been slated to receive around 2,000 doses. Meanwhile, the Highway Patrol region that encompasses the St. Louis area makes up about 37 percent of the state’s population and the region for Kansas City makes up about 23 percent.

Schupp said more populated areas should be receiving more than one mass vaccination event a week, and she would have preferred congressional districts be used to split up the state to ensure efforts would be divided more evenly based on population.

“I just feel like we were starting, in a sense, from a false premise by dividing a region that way,” Schupp said. “I don’t even to this day understand why that was the choice.”

The data requested by Schupp’s office only reflects the first eight weeks of Missouri’s vaccine rollout, meaning allocations of vaccine in the last three weeks to mass vaccination events with the Missouri National Guard and “high throughput” hospital systems are not included.

While Schupp is encouraged by the state’s new models to distribute the vaccine, she wants to ensure the state is bringing vaccine to the people — rather than having them drive hours to get it.

It’s one of Davis’ main worries that residents with less resources must grapple with in the face of unclear information. As a nurse who knows how to navigate healthcare systems, she felt better equipped to search for an appointment — and even then it was still frustrating.

“The whole thing has just been planned poorly,” Davis said. “And it’s not like they didn’t have plenty of notice.”

For Davis, getting vaccinated means she can start to feel safer finding another job implementing electronic health records or perhaps volunteer to give shots herself. And hopefully she can see her family and grandkids again when it’s safe enough to do so.

Despite the hours of work Davis put in searching for a shot, she’s not taking it for granted.

“I was just so incredibly lucky to get the right person today, at the right time,” Davis said, later adding: “It’s by lucky circumstance.”

This piece is reprinted with permission via Missouri Independent, which focuses on Missouri political and policy reporting. They’re an excellent team of journalists and we’re always thrilled to be able to share their coverage.