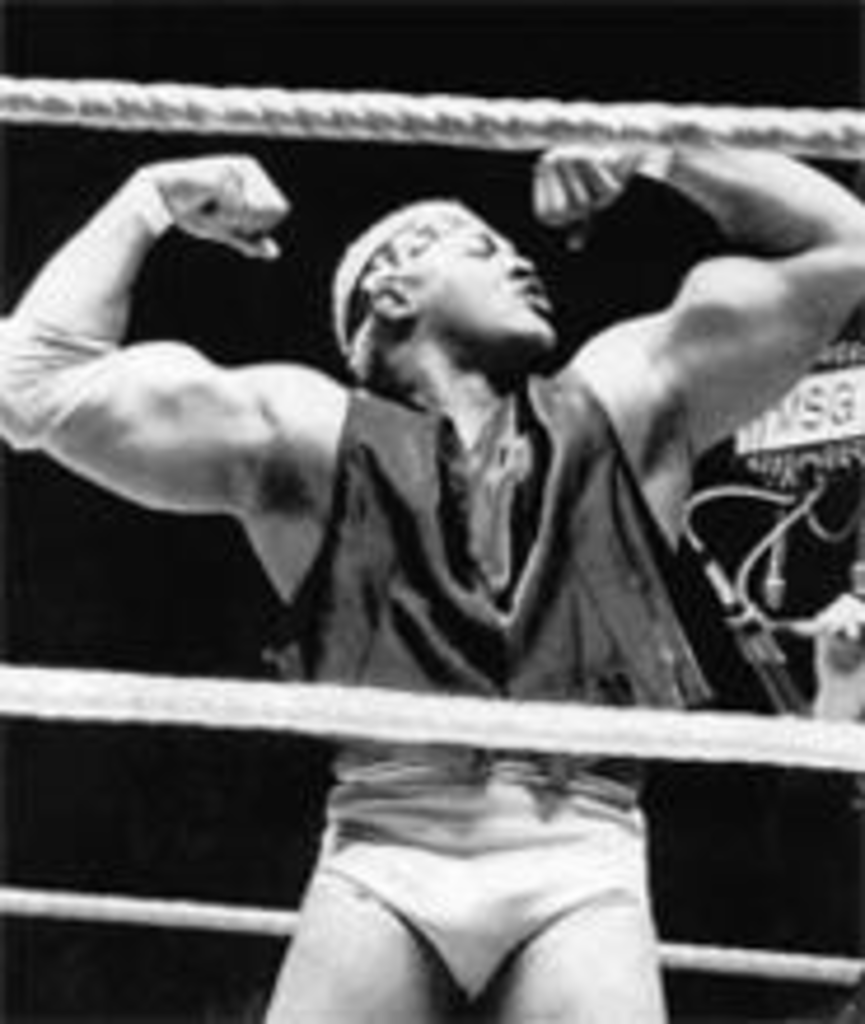 If anyone understands unpredictable hookups … well, we do. But when we caught wind of an event that threw Review magazine in bed with Bazooka’s, we were a bit shocked. And very curious to know how it happened.

“The story’s kind of, uh, involved,” says Jori Sackin, the mastermind-by-default behind Summerbrawl, a wrestling extravaganza in the Zone Sculpture Park behind Grinders on 18th Street.

It began simply enough. Sitting on a porch, having a few beers with a friend, Sackin learned that his friend’s roommate was Butch “Hacksaw” Reed, a professional wrestler who had enjoyed stints with the World Wrestling Federation and World Championship Wrestling in the late ’80s and early ’90s. Reed asked Sackin, an amateur filmmaker, to film one of his matches, which he did; Sackin then offered to set up Reed and some of his friends with a few locals to help with the wrestlers’ plans for a match in the Crossroads.

Sackin, who is also working on a short documentary about artist Lester Goldman, offered to help a little, even though he was busy. He recalls, “I told Hacksaw, ‘Look, if you’re going to have it down there, you need to get the arts community behind you. I’ll introduce you to some people, I’ll design your poster or something, but that’s it.'”

Or so he thought.

“So anyway, I’m waiting for a call from the guy who’s really organizing it, my friend. And then he calls,” Sackin says, then pauses. “From jail.” Not wanting to waste all the time and effort the two had already put into the event, Sackin ran with it. “The job sort of just fell in my lap. And I’ve been doing it ever since.”

To guarantee an audience, he decided to make the event a benefit for Review, Kansas City’s nonprofit arts publication, but he still needed funds up front.

“I went around to the galleries first to ask for money, but of course the galleries have no money. So then I went to Bazooka’s.” And he was in business.

“The interesting thing about wrestling is how it has this whole parallel to stereotypes in our society, how it echoes what’s going on politically,” Sackin says. “When I was a kid, there was a Bolshevik, you know, an ‘evil Russian.’ They would bring this big Russian flag into the ring, and everyone would boo, and he’d be fighting Hulk Hogan, this all-American guy. That’s why Hacksaw’s fighting the Sheik, an ‘Arabian assassin.’ It’s a whole play on that idea.”

As enthusiastic as he sounds, Sackin says he hasn’t always been such a fan. “The last time I watched wrestling, I was probably, like, 12 years old. But what I do like is coming up with the costuming, the characters, the story line, the whole theatrical aspect of it.” He wrote the script, planning who would wrestle whom, what they would say and — we think — the outcome, though Sackin denies having decided on a winner.

So has he found his calling?

“I never would have graduated from the [Kansas City] Art Institute with a painting degree and been like, ‘Well, now I want to be a wrestling promoter,'” Sackin admits. “But that’s just the way things go.”