Rapper Leikeli47 unmasks (sort of) ahead of Tuesday’s Encore show 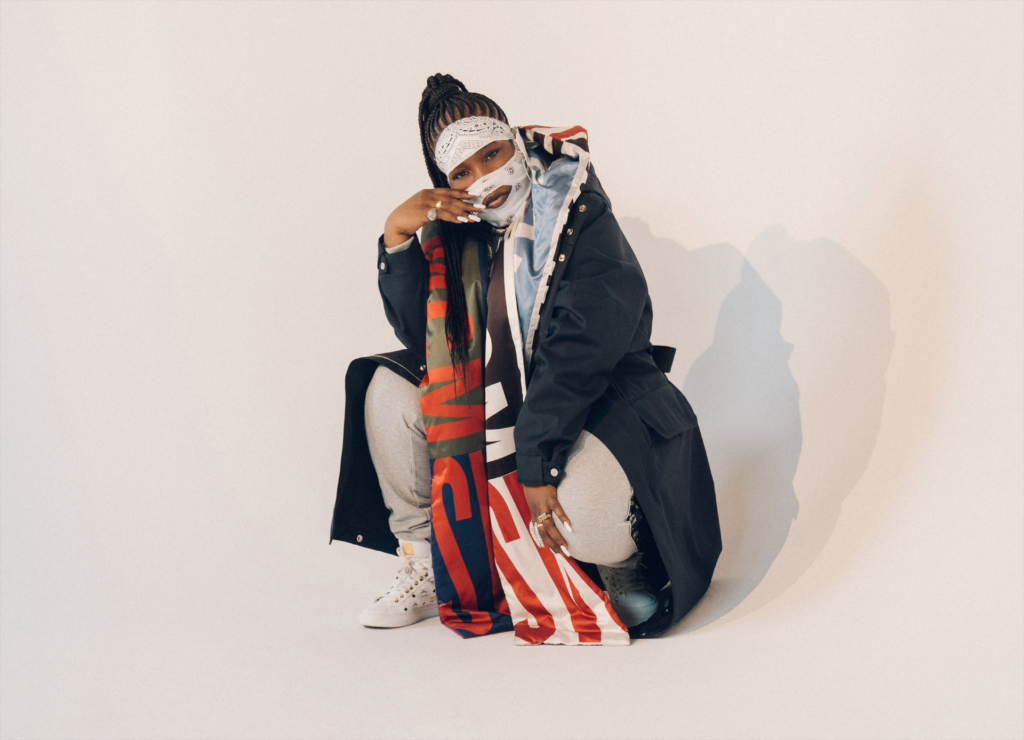 Though rapper and producer Leikeli47 might opt to keep her personal identity under wraps by masking herself behind balaclavas and bandanas, she’s far from anonymous. Her music videos are a visual delight, playing with styles and genres as fluidly as her lyrical delivery and beats. And despite having shied away from interviews in the past, she’s effusive and open about her art during our brief ten minutes on the phone. We spoke about her latest album, Acrylic, those stunning videos, and how she’s preparing for her first big tour.

The Pitch: One of the things I really wanted to discuss was your videos, since they’re so visually striking. Where does an idea for a video like the one for “Tic Boom” start?

Leikeli47: Well, for me, it started with Spike Lee’s Malcolm X, if I can be 100 percent honest. There was a scene in there that was just so striking, and it spoke to the braveness inside of me. It’s the scene where Malcolm walks up to the cop after making sure one of his counterparts — one of his brothers — was OK. Just the way he faced that cop, in that day, and in that time, with just no fear at all — it just really spoke to me, and I just wanted to play with that and put the inspiration to the music.

Working with the director, Edgar [Esteves], and just giving him my vision and talking everything out, I think that he did an amazing job with bringing that to life. I definitely wanted to be able to come from that narrative, to just not be scared to bulldoze yourself through any type of problem, through any type of situation.

No matter what it is you’re facing in life, know that you have the strength. The strength lies within you to really push through.

Would you say that doing videos is a way of being brave, yourself? I know that I’ve read in interviews that you were a shy kid and a loner, and it seems like it takes a certain amount of bravery to be the focus of so many videos.

Yeah. Film is definitely another way I get to express myself and kind of step out of my comfort zone. The videos definitely speak to the shy kid that I was growing up. I have a lot of fun exploring different ideas and different concepts. You know: things that, even as a shy young adult today, I wouldn’t do outside of my mask! [laughs] So, yeah: doing videos and just being able to live in these concepts and escape into these creative little worlds is pretty dope, and it helps me a lot.

It helps me a lot as an artist, especially in that booth, and for the most part — and I’m sure this is true for most artists — you can see the vision and get a grasp of just where it is you want to go when you’re in the recording booth. It’s also super-dope how everything just plays hand-in-hand, you know?

How are you preparing for your upcoming tour, since it’s your first big one?

You know, rehearsing, but really, I think it’s more of a mental thing. As far as the shows, they flow, and whatever’s going to happen there, happens. I rehearse to no end, show-wise, but it’s just preparing mentally to hit all these cities and take all these dates in. I just look at all these dates and say to myself, “Girl, you got it.” It’s just what I have to do. It’s the work that I want to do. I’m actually looking forward to the work that’s gonna come.

I’ve just been kind of taking it easy. Nothing has really been changing, because rehearsing and things like that are just second nature to me. I’ve just been telling myself, “You got it,” and just getting excited every day as we get closer to it, and that’s pretty much it.

It’s funny: I go from this small kitchen space and onto these stages, and I feel like I can conquer the world. It’s like, if I can cut up in this little space, this [stage] right here? It’s my playground.

Leikeli47 performs at the Encore at Uptown Theater on Tuesday, March 19, with Yung Baby Tate and Supa Flowa. Details on that show here.