Rapper AR!ON on taking time to make something right 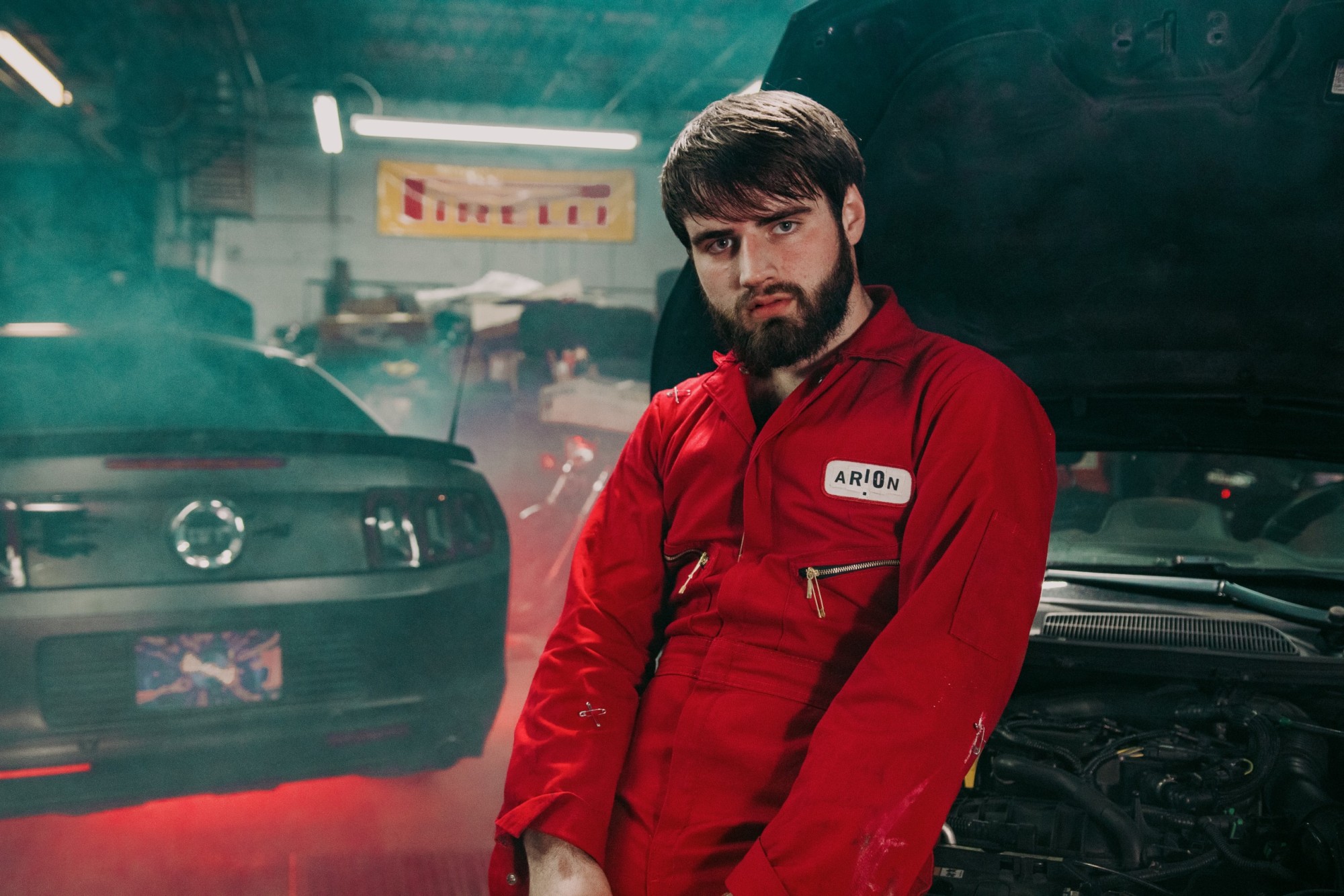 Kansas City rapper AR!ON dropped new music every other week for the past nine months but recently took time off from his insanely-productive schedule to concentrate on his upcoming album, Temple. Given that his second album, Butterfly Door, just dropped a little over a month ago, one can forgive this passionate musician for wanting to make sure that the next big project is something worth waiting for.

For those needing more AR!ON, he’s performing Saturday night, July 23, to headline a showcase of local talent at MOD Gallery & Space downtown. We hopped on the phone with the rapper a while back to discuss his work, both past and upcoming, as well as what to expect when Arion performs on Saturday.

The Pitch: Can you explain Blockchain Records a little bit?

AR!ON: Well, Blockchain is in very early stages, but the idea is to provide a sense of “I am already signed to a label.” For some reason, people wanna book you a whole lot more whenever you’re signed to a label. We’re just trying to present the level of professionality that I’ve worked on in my music in such a manner that people want to book me more and see that professionality. The only way to do that is to be signed. That’s what Blockchain is.

Eventually, I want it to be a promotional company as well, where I throw shows for local artists that just don’t know how to get shows, ’cause I know so many talented artists in the area now.

You’ve got this upcoming show to celebrate your third album. In terms of recording, what spaces and people are you using?

So I have several friends who own their studios that allow me to come anytime I desire. One friend in particular—my friend Goldchild—owns a Manley microphone, which is one of my favorite microphones I’ve ever recorded on. The whole idea of my next album, Temple, is I’m going to be recording the entirety of it on that.

The entire idea is that you’re gonna be recording it on the Manley, which is the microphone that he has, and that will keep the album cohesive by being in one studio. Is this different from how you’ve done past product projects?

Yes. So normally, I just record wherever it is that I can record and I just kind of keep it moving, but this particular project is different because I haven’t set a release date for it prior to getting it done. For every one of my other projects, I set a release date so I could have a goal to work towards and know that I have to get this project out by this date, but what that does is that that puts a little bit too much pressure on the creative process of it.

I just wanted to take my time with this project. I’m keeping singles going–at least releasing one single a month. I’m trying to ensure that this project gets all of the creative attention I feel deserves.

One would imagine there’s not a huge rush to get a full album done, given that Butterfly Door came out just a little bit over a month ago.

Right. I agree with you there. All of those albums—I feel from my perspective—were rushed. Dark Star November, Source Code, Butterfly Door: every single one of those was rushed because I had set a release date before even having the projects.

What are the negative effects that it has on you in the studio as an artist?

So, music is my life, and I will make music ’til I die, but what that did to my creative process is it took the element of spontaneous, fun creativity out of it and made it less of something that I love and more of something that I had to do. That’s what I feel affected my music negatively.

I feel like this upcoming project, Temple, will shine because I’m not stressing myself out about it. I’m just letting it flow naturally.

Can you hear this difference when you’re going back and listening to the tracks regarding how it affects your delivery?

I don’t think it affects my delivery, so to speak. I worked very hard to make that something that I have mastered. I’ve been writing songs since I was 10 years old, but what it affects negatively is the production quality. Because I’m engineering and producing all of this with the help of a few select friends, I would’ve spent more time cleaning up those mixes and making sure everything was perfect had I not set a release date for it.

There were just a couple of things that nobody else could know because, you know, it’s just how it is. But I know that certain things are missing that I would’ve added had I given it more time.

Every artist seems like, “No, there’s a way it sounds in my brain and this isn’t the way it’s supposed to sound.”

Yeah. Yeah. That’s the trouble I ran into with that tactic, but I had set a goal for myself. If you look at my discography, I have released something every two weeks, since October 14 on all platforms and just recently, that took a break because I decided after Butterfly Door that I needed to focus on creating and not worry about getting releases out, ’cause I have a larger discography now. I have a solid baseline.

It’s the idea that “I’ve got this bedrock on which I can stand. Now let’s start working on the house.”

Yeah. Thank you. That’s exactly what I’m trying to do now.

As far as the house goes, I’m trying to make it as creatively out of the box as I possibly can, utilizing all of my different influences. While I am working on this album, Temple, and taking my time with it, I’m still working on singles at other studios to keep something flowing.

The songs that go on Temple are gonna showcase my versatility, not only within the rap genre and within my sound as rap artist, but also explore my more pop side and the ballad side of myself. There’s a lot of different flavors on this project. Even though it’s all consistent in the energy, there’s a lot of genre twists within. I’m trying to make it feel as futuristic as possible, as new wave as possible. There’s a lot of mixing techniques that I’ve utilized for this project that I’ve never utilized before.

The idea of making your singles at something unique, in and of themselves and making the album something that stands on its own as a whole is a cool approach. You’re crafting an album instead of cobbling one together from the singles you’ve released heretofore.

That’s exactly how I feel about it.

That is something a little bit different from the way most folks work, which is the idea that each single is building towards this album release, whereas for you, it’s like, “No, these are one thing. This is another.”

It works so well because I haven’t placed myself in a box of “Arion is just this genre or just that genre.” Arion is every genre that I can get my hands on. I have a country song in the books that nobody knows about, except for my close friends. I try to dabble in as many different genres as possible because I love all music, and I appreciate all music across the board. If it’s a good song, it’s a good song.

With this upcoming show, will folks get a peek at some of these new songs you’re working on for Temple?

This next show is really interesting because it’s the videography company that is putting on the show. They go by NINE2NVR and helped me release my first professional video for my song, “BEMYFR!END,” which was on my album, Dark Star November.

I’m utilizing this show to give a peek at the high-energy parts of this upcoming project–the heavy hitters, so to speak. I’m going to perform three of those songs and they all have a different energy, but they’re cohesive in the fact that they are all, I guess, hype show material.

A lot of people go to shows ’cause they want to move and have fun, but they gotta have something to move to. If I’m singing some of my I material, it’s gonna be really hard for anybody to get hype and dance.

Well, sad bangers are their own subgenre.

Right, and Temple does consist of that in a couple of different, interesting ways, but I feel like the goal of Temple was–even though I have some sad places that I come from–I wanna show the light at the end of the tunnel that I’m getting to. The name of the show that NINE2NVR is putting on is called “The Annual Clock-In.”

NINE2NVR’s slogan is “Never clock out on your dreams.” NINE2NVR is, “I’m never gonna work a nine-to-five. I’m gonna work nine-to-never ’cause I’m not working. This is my passion, so it never feels like work.” They’re a videography company, but they’re also gonna be putting on this show once a year that showcases all of the videos that they’ve put out for different artists for that year.

Each artist that has a music video with them for that year is going to perform their music video’s song at this show. They’re a very, very creative company, and I am more than grateful. It’s beyond words. I cannot express my gratitude in words for how grateful I am for them just being willing to work with me and help this vision come to fruition.

AR!ON performs as part of NINE2NVR’s Annual Clock-In on Saturday, July 23 at MOD Gallery and Space. Details on that show here.