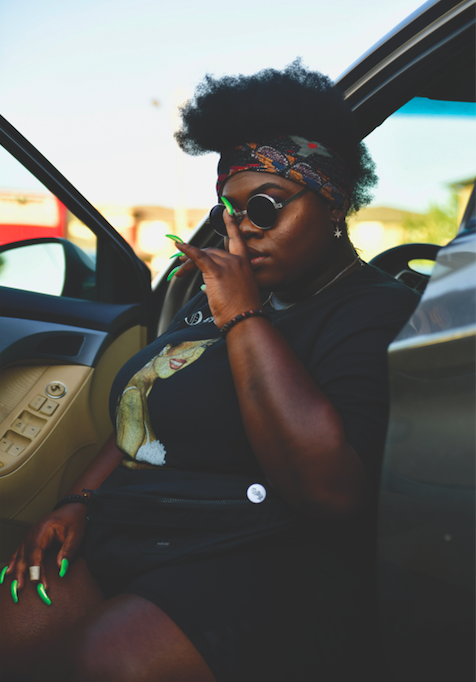 “I just fuck with myself heavy,” Wang says, “and I think that’s what really shows on stage.” // Photo by Aaron Rhodes

Amira Wang has always had a talent for starting parties.

“In high school, I swear to God, I would just walk around and yell, ‘Big booty hoes!’ in the hallways,” Wang says, laughing and recalling her days at Raytown South (where, yes, she was once voted class clown). She caught some odd looks in the process, but inevitably her female classmates started dancing, and then the boys, and a little party would break out in the hallway.

“I enjoy my own company — I’m funny as fuck to me,” Wang says. “I just fuck with myself heavy, and I think that’s what really shows on stage. I have a good time. I be tellin’ myself jokes, I be talkin’ shit to myself. Sometimes I’ll wake up in the morning and I’ll look in the mirror and be like, ‘Boy, you fried as fuck today,’ and I’ll roast myself. And then sometimes I’ll look in the mirror like, ‘Damn, bitch, you glowin’, ain’t you?’”

Lately, more and more Kansas Citians are finding Wang to be glowin’, too. She conjured up her first raps several years ago, driving around and hanging out with her friends. At first inspired by the aggressive bars of artists like Chief Keef and Fat Trel, Wang eventually began to hone her skills and find her own voice. In 2017, after hearing Wang rap a portion of what would eventually become her first single, “Let the Beat Go,” a friend became genuinely upset with her for not having any recorded material. “Make a SoundCloud. You keep wasting your talent, your youth is leaving. You’re just gonna waste your shit and miss your shine,” he implored her. The local veteran emcee The Epitome, who Wang now calls a mentor, was also pushing her to do more. Last May, he placed her on the flyer for a Riot Room showcase before she even had time to say yes.

Wang’s debut EP, Rap Game Ragu, was released in October, and nearly a year later, it’s still finding the ears of new listeners. The project sees Wang trying out a handful of different styles but consistently accomplishing the goal of creating an ass-shaking good time. “Cake Day” is post-Cardi B club bop; “Use Ya Back” features authentic New Orleans bounce; and the video for “Let The Beat Go” references Missy Elliott’s “The Rain (Supa Dupa Fly).” (And I’m fairly certain Missy would approve of the whole package.) Live, her shows buzz with chaotic but benevolent energy. At a recent show at the Buffalo Room, half a dozen young women hopped on and off the stage, twerking as Wang confidently spit her raps.

Let this be a warning, though, to dumb men who wish to discuss Amira’s music with her: Despite her liberal use of sexual imagery in her music, there’s far more to Wang’s art than sex. In my first interview with Wang — and in another one I listened to — remarks were made about the “nasty” elements of her raps. Rightly, Wang pointed out the double standard in place: male artists with lewd lyrics (including rappers she grew up admiring, like Ludacris and the Ying Yang Twins) are rarely subjected to such questions. So, why should she be?

Wang hoped to release a new project this summer, but decided that the material she’d been producing lately is too lyrically dense and wouldn’t land right with a summer crowd jonesing for melodic party tracks. So, we’ll have to wait a bit longer. Silver lining: Wang says the new stuff is more fulfilling. “I think now I’m just making the music for me,” she declares.