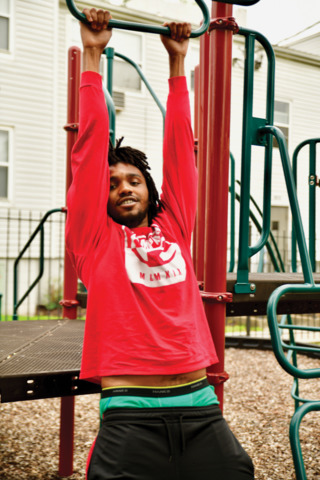 A’Sean Everette walks across a parking lot toward a playground outside the Greenleaf Apartments in Northeast Kansas City.

“A lot of shit I talk about comes from reminiscing on this place,” Everette says. “I got a lot of stories from this motherfucker.”

He points at the drab, white one-story apartment building where he once lived. He used to stare out the window at the people on the street and invent stories for them, which he’d turn into spoken-word pieces with titles like “Project Window.” Everette spies a man walking awkwardly down the sidewalk and spins a quick, fictional narrative: He used to sell drugs back in the day, then he got his spot taken by somebody else, then he formed a habit himself.

Northeast KC looms large in Everette’s work. He attended Blue Valley North High School (thanks to a relative’s home address), but he spent a lot time here, starting around the age of ten and through his teenage years, and he recently moved back after living in the 50s off Troost. On his new album, One Big Happy Family, he treats it both as setting and subject. It’d be a beautiful thing if your dreams could prosper / But how could I think I’m alive if all I see is monsters, he raps on opening track “Hotel Rwanda,” referencing the neighborhood’s lack of resources and the warlike horrors it can unleash. The song is followed by the graphic “Muney’s Pain (Victim),” in which Everette details the anxiety-ridden lifestyle and the traumas endured by his lifelong friend and fellow rapper Ray Muney: gun battles, crack houses, depression. I shed so many tears, goes the hook.

It took a while for Everette to embrace darker and more mature themes in his music. He started out sending diss tracks to high school classmates who were rappers, then began making party songs with his friend and producer Jacob Walton, aka [Walt], before the pair evolved to their current, more focused state.

“I was not emotionally ready to talk about this shit at first,” he says, settling into a seat at the playground’s miniature picnic table. “I’d try, but the songs wasn’t good, and I wasn’t saying the right shit to get it to come across and really be able to express myself.”

Now, at 22 years old, Everette feels he’s up to the task of taking on more adult topics. In addition to his own personal growth, he credits the controversial (and now deceased) rapper XXXTentaction with popularizing a more emotive style of rap that he’s been able to incorporate into his overall aesthetic.

And One Big Happy Family — the title is vaguely satirical; “The music’s all fucking sad,” Everette says, laughing — indeed bleeds with emotion. “Open” and “Home” are Everette’s most vulnerable love songs yet. “Blue Pill” unpacks the hypocrisy he observed growing up in a religious family. “Daddy’s Dearest” addresses his father’s acts of domestic abuse and periods of absence. The first half of “PeeWee’s Song” chronicles how Everette’s mother cared for him as a child with rheumatoid arthritis; the second half reverses their roles, exploring a recent health scare his mother suffered. Everette hid his tears behind aviator shades while performing “PeeWee’s Song” last year at a show when his mother was in the crowd.

Then there’s “Facts,” which sputters to life following the sounds of a radio dial being tuned, capturing the joy felt when an upbeat rap song hits your car stereo on a hot summer’s day. It might first come off like an ordinary radio song due to its playfulness and indulgence in ego, or even like an interlude (running at 95 seconds), but “Facts” shows Everette speaking his truths (I ain’t ever shot no gun / I ain’t ever sold no rock) and dishing out autobiographical details (Between Truman Road and the Ave., n**** / That’s where I grew my soul, I’m from the North Pole, so don’t ask, n*****).

Everette celebrated One Big Happy Family’s release back in February with a concert in the theater below Westport Coffee House, where he was joined by [Walt], rapper SoulFoodSuede, and a pair of young poets. The mood was warm and intimate; Everette spent most of his performance rapping alone from atop a stool.

“If [rappers] sit down, it can be very boring,” he says, “but I feel like it puts the pressure on me to rap as well as I need to — to pull enough emotion out of me to make everybody in here look at the middle of the stage.” And for a few brief moments at that show, A’Sean pulled off a Herculean feat: he made Kansas City feel a little bit like one big happy family.