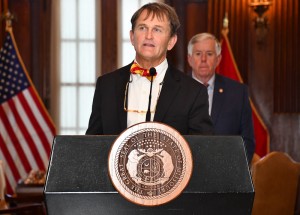 Amid the peak of Missouri’s COVID vaccine rollout and just four years on the job, Randall Williams has stepped down as director of the state’s health department, effective immediately.

Gov. Mike Parson’s announcement did not give a reason for Williams’ departure. Robert Knodell, Parson’s deputy chief of staff who has played a key role in the state’s vaccine distribution, will serve as acting director until a permanent replacement is found.

“Dr. Williams has been a huge asset to Missouri, especially this past year in dealing with COVID-19,” Parson said in a written statement. “We greatly appreciate all the work he has done for the people of our state and wish him the best in his future endeavors.”

Williams did not immediately respond to a request for comment Tuesday afternoon.

Also Tuesday, a second top official in Parson’s administration resigned without an explanation. Drew Erdmann, who has served as Missouri’s chief operating officer since former Gov. Eric Greitens created the position for him in 2017, also stepped down.

It’s unclear whether Parson plans to fill the position, as it’s been a point of contention for lawmakers who have long questioned the value of the job itself.

Williams has been the highest-profile member of Parson’s cabinet, even before COVID-19 swept across the state. And his departure from the Department of Health and Senior Services comes as the state continues its efforts to vaccinate all Missourians while hundreds of COVID cases continue to be reported each day.

His resignation also caps a tumultuous tenure as the state’s top health official — from allegations of conflicts of interest surrounding the state’s nascent medical marijuana program to national headlines accusing him of tracking women’s menstrual periods.

His time in North Carolina was also marked by controversy, most notably when he reversed a “do not drink” health warning over the objections of some scientists. The water in question had been contaminated with high levels of a toxin found to cause cancer.

The move was the subject of a lawsuit and caused state scientists to resign in protest.

In 2018, lawmakers slashed eight positions from his department following his refusal to release information about the spread of the rare Bourbon virus, which had killed a state employee. The department defended its decision saying do so would have violated health care privacy laws.

In the legal battle over licensing renewal for the state’s last abortion clinic, it was revealed that Williams had requested a spreadsheet be made to track women’s menstrual periods who had visited Planned Parenthood in order to identify those who had undergone failed abortions.

The House minority leader called on Parson to investigate whether patient privacy was compromised as a result.

In 2019, Williams also advised Parson to veto funding for a “time-critical diagnosis” program that helped ensure severely ill patients could be connected to hospitals that could treat them most effectively. The move received swift pushback, and Parson narrowly avoided his veto being overturned by a legislature overseen by his own party.

Under Williams’ watch, the department has also come under intense scrutiny and faced multiple lawsuits for its process of awarding medical marijuana licenses after the program was approved by voters in 2018.

More recently, Williams has become the most prominent face of Missouri’s response to the COVID-19 pandemic and subsequent vaccine rollout.

Amid the pandemic, the state resisted calls from leading medical associations to institute statewide restrictions, like a mask mandate, and instead left decisions on health orders primarily in the hands of local officials.

It wasn’t until March that the state counted antigen tests in its data, resulting in more than 80,000 previously uncounted COVID-19 infections being added to Missouri’s total tally.

The vaccine rollout, the likes of which haven’t been seen since polio, has had a slow start, ranking last in the nation in January in terms of the percentage of residents who had received their first shot. Residents and lawmakers were also outraged over what appeared to be a surplus of vaccines in rural areas while residents in the metros drove hours to secure a shot.

While just over half of U.S. adults have received at least their first dose of a COVID-19 vaccine, Missouri continues to lag toward the bottom of the nation with a little over a third of residents receiving their initial dose.

The department has also been found to have violated the Sunshine Law multiple times, most recently being ordered this month to pay nearly $138,000 in legal fees after an appeals court found it had “knowingly and purposefully” violated the law.

House Minority Leader Crystal Quade, D-Springfield, released a statement ticking through all the controversies of Williams’ tenure and asked how he managed to keep his job for the last four years.

“With his sudden and unexplained resignation,” Quade said, “one can’t help but wonder what finally convinced the governor to show him the door.”

Yamelsie Rodriguez, the president and CEO of Reproductive Health Services of Planned Parenthood of the St. Louis Region, said for two years the organization has called for Williams’ resignation.

“We’re disappointed it took this long,” Rodriguez said in a statement, “but we feel vindicated for every Missourian whose life was made harder because of Williams’ failure as a public health leader.”

Rep. LaDonna Appelbaum, a St. Louis Democrat and ranking member of the House Health and Mental Health Committee, criticized the governor’s decision to tap Knodell to run the department “as our state is still in the midst of a public health crisis.”

She cited Knodell’s work overseeing the vaccine rollout, saying “he shoulders much of the blame for the state’s early failures to provide vaccines to urban and suburban areas.”

Parson praised Knodell in his announcement, saying he has played a leading role in Missouri’s COVID-19 response efforts, and “I am more than confident in him to take over as acting director of the Department of Health and Senior Services.”

In the wake of Williams’ resignation, standing orders to administer the vaccine were reissued under Knodell and with George Turabelidze, the state epidemiologist, as the authorizing physician. The switch caused some confusion on a call Tuesday afternoon with vaccine providers, as the state worked to communicate the change and issue revised orders for things like rapid COVID testing.

Candidates for Ward 2 of Overland Park answer The Pitch's survey on government transparency, equity, and the status quo

Candidates for Ward 1 of Overland Park answer The Pitch’s survey on government transparency, equity, and the status quo