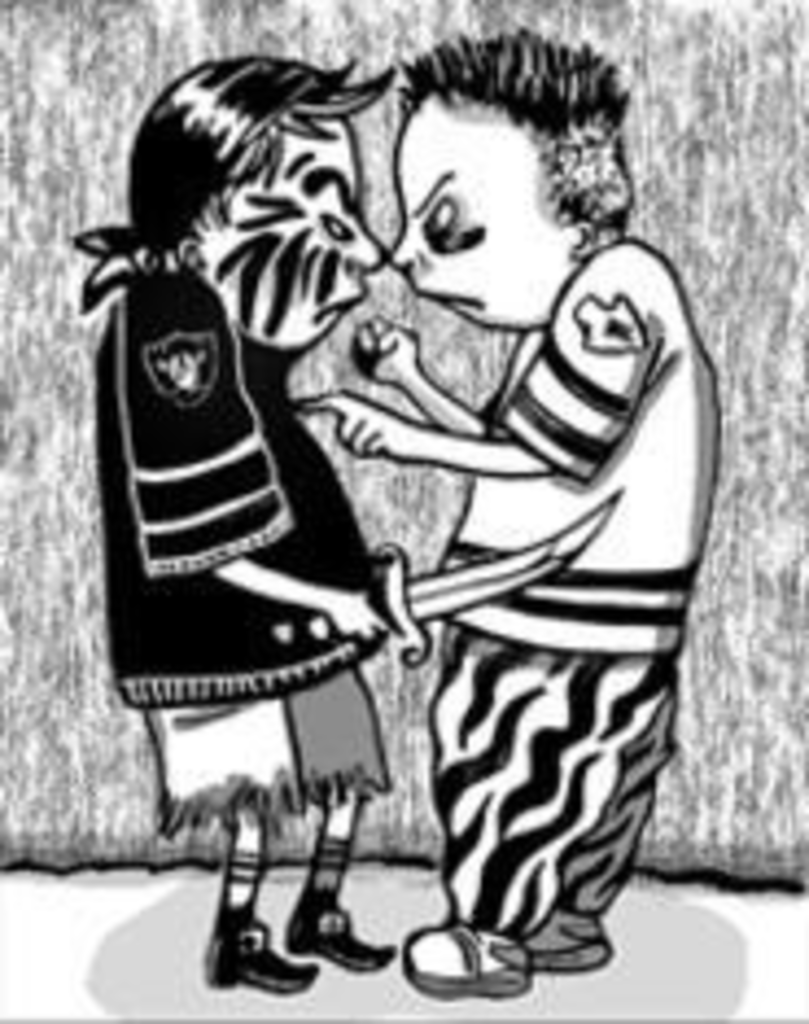 SUN 11/6
In the late ’80s, Raiders gear dominated urban fashion. N.W.A.’s villains sported the menacing attire, as did the politically conscious good guys in Public Enemy. (The rappers were more intimidating than the on-field hulks who shared their uniform preferences.) But then Raiders fans graduated to grotesquely ugly mask-and-spikes ensembles that made them look like closing-time casualties at the Star Wars cantina. These costumes haven’t created much of a home-field advantage for the last-place Raiders, though. ESPN analyst Sterling Sharpe Amaintains that the Raiders’ struggles would dissipate if they threw the ball to renegade receiver Randy Moss on every play. This approach would devastate the Chiefs, whose pass defense has struggled. Fortunately, though, coaches ignore Sharpe because he sounds as loony as Raiders crowds look. Chiefs fans attending the game at Arrowhead Stadium (One Arrowhead Drive) at noon Sunday need not celebrate impending victory by berating Raiders rooters with profanity. A simple “Halloween was last week, loser” will suffice. At press time, a few single tickets remained available; call 816-931-3330. — Andrew Miller

Danny Manning: one of the five people we’ll meet in heaven … or at Sportsnite.

SAT 11/5
We dare you not to bawl, sports guys. Are you the type who tears up while reading author Mitch Albom‘s Tuesdays With Morrie or gets misty at the thought of being in the same room with Bill Self and Danny Manning, slapping backs with the ’88 Jayhawks? Will you beam at the cheery twinkling that’s the trademark of Kansas City Star columnist Joe Posnanski, the evening’s master of ceremonies? Then Sportsnite 2005, a fund-raiser for the Jewish Community Center at 6:30 p.m. Saturday at the Marriott Muehlebach Towers (1213 Wyandotte), is for you. Posnanski might choke you up, but Albom will be the real test, especially when he starts the life lessons. You’ll clench your face up tight against tears as he tells you of Morrie and the five people you meet in heaven. Even the 810 Zone crowd knows it’s OK to cry about sports, right? Call 913-327-8000 for tickets. — Alan Scherstuhl

Ice Capades
Crown Center Ice Terrace is open — now excuse us while we fall on our ass.

FRI 11/4
It’s time for one of our favorite traditions: The Crown Center Ice Terrace (2450 Grand Boulevard, 816-274-8411) is open, and we’re thinking about setting our alarm clock early for some prework rink time. The opening-day celebration means free skating from 6 a.m. to 9 a.m. Friday, along with coffee and doughnuts. After that, hours are 10 a.m.-9 p.m. Sunday through Thursday and 10 a.m.-11 p.m. Friday and Saturday. Don’t worry if you don’t get there Friday — the rink is open until March 19. Admission is $6, and skate rental is $2. — Rebecca Braverman