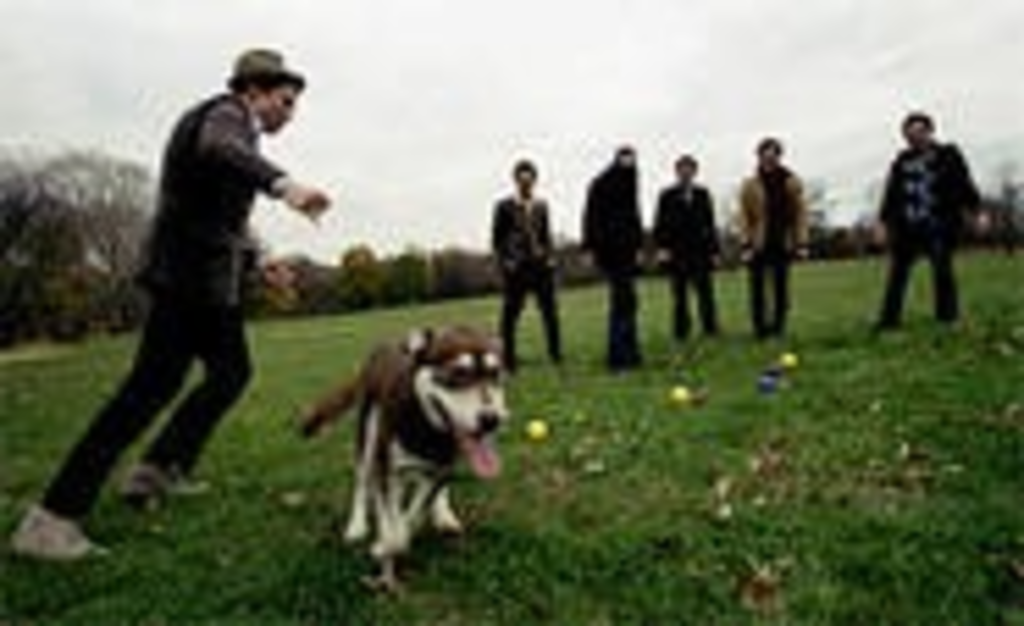 “Kid On My Shoulders” by White Rabbits, from Fort Nightly (Say Hey Records):

Two years after moving from Columbia, Missouri, to Brooklyn, New York, the White Rabbits are rock stars. Their Say Hey Records debut came out in May, and they played The Late Show With David Letterman in July. Somewhere along the way, this literary, rambunctious, almost painfully sincere group of six became bold enough to tell Rolling Stone to go fuck itself. (More on that later.)

Adam Russell, the band’s bassist, breaks down the Rabbits’ meteoric rise. It all started when he dropped out of high school in Jefferson City at age 16. His superiors had it in for him, he claims.

“I was always getting in trouble for stupid things, like eating an apple in the hallway and reading in class,” he says. The forbidden texts? You know, basic slacker stuff like Moby-Dick, physics tomes and Nietzsche.

Russell and buddy Alex Even, who now plays guitar for the White Rabbits, had been making regular CD shopping trips to Columbia’s Streetside Records. One of the store’s clerks, Greg Roberts (now also a guitarist in the band), offered Russell a dwelling in the boiler room of his house on South Ann Street — sans furniture, of course. “I just stacked all my books and slept on a futon cushion,” Russell recalls.

Even made his way to the college town upon graduation from high school, and the three joined a punk-rock outfit whose name is so embarrassing that Russell insists it not be printed (seriously). In the meantime, they worked odd jobs. Russell held down the fort at places such as Tiger Tales Bookstore and Shakespeare’s Pizza, though he was fired from the latter for skipping a shift to go play a gig.

The guys decided punk wasn’t their thing, so, with the help of Matt Clark (a friend of Roberts’ from Webster Groves, Missouri), Steve Patterson (also a Streetside employee) and Jamie Levinson (a Mizzou student), the rock-centric White Rabbits were born in 2004. Jamie Levinson, like Patterson and Roberts a Mizzou grad, joined the band in New York.

With as many as three drummers and a fedora-wearing Patterson plunking a piano, the band’s rousing, ragged live performances referenced ska, reggae, honky-tonk and calypso. Before long, the band was as big as a local act can be in Columbia, playing to larger and larger crowds at places such as Mojo’s, Shattered and The Blue Note.

“Any time any band of any stature would come into town — like Sharon Jones and the Dap-Kings or Secret Machines — we would open for them,” Russell says. Inspired by the success stories of bands such as TV on the Radio and the Yeah Yeah Yeahs, the group set off for New York City in the spring of 2005.

“People liked us in Columbia, but you know how Midwest politics go,” Russell says. “People found out we were moving and resented it.”

But the Rabbits’ fame would not be denied. The president of Say Hey Records approached the band after its first show in New York. Over the course of the next two years, the band recorded and played shows constantly, building up a passionate, female-heavy grassroots following.

The Rabbits’ debut, Fort Nightly, has sold about 5,000 copies, not bad for an indie band in an era of digital downloads. Capturing the intensity of the band’s live shows, it was met with almost entirely positive reviews. Except, that is, from Rolling Stone.

“They panned it,” Russell says with a grin. “Three weeks later, they wanted to write a story about us. We never responded [to the query]. I mean, come on. They published Fear and Loathing in Las Vegas. Can you imagine that happening now? It’s all just fluff.”

Russell, who for most of his New York tenure has made ends meet by working at the Strand bookstore, says the band can now squeak by solely on its music. The Letterman gig came about thanks to persistence from the band’s manager. Russell says the best thing about playing on national television was that it was something his mom could see. (Presumably that was more exciting for her than when, say, the Rabbits opened for indie powerhouse the National at Cornell University.)

But Russell wants to emphasize that it hasn’t all been easy. At the beginning of the year, the Buskwick, Brooklyn, loft that five of the bandmates share was hit by a rash of bedbugs. A couple of months later, while driving to the South By Southwest festival, a tire on the Rabbits’ tour van exploded. Fortunately, a kind soul at a Springfield, Missouri, auto shop quickly got the boys back up and running.

“We’ve learned that if you break down in the Midwest or the South,” Russell concludes, “you’re probably going to be OK.”