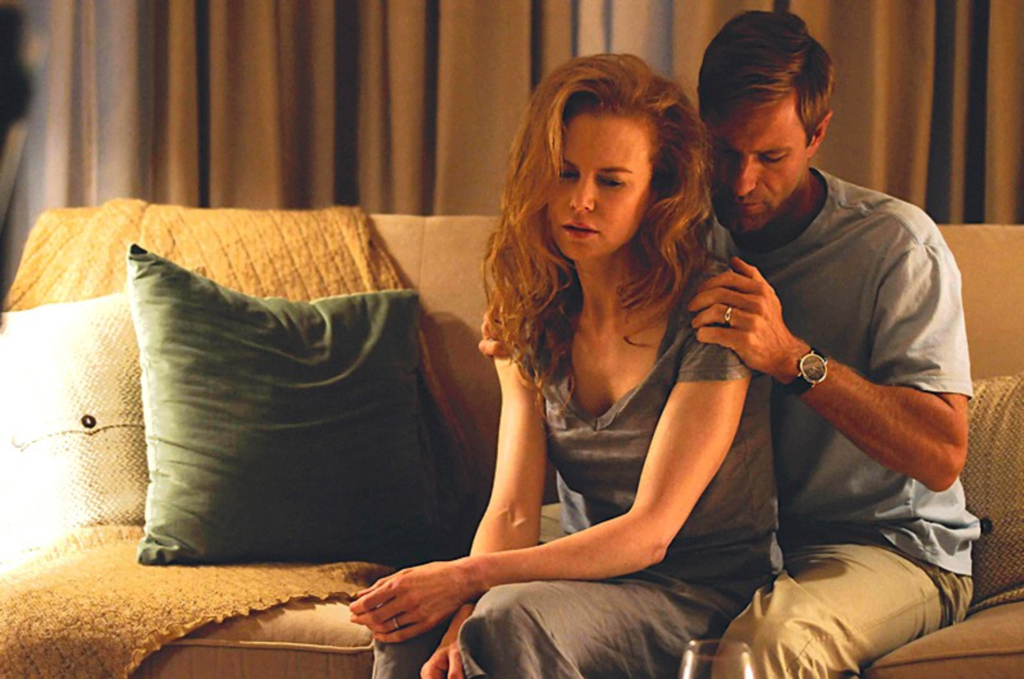 Based on the Pulitzer Prize–winning play by David Lindsay-Abaire, John Cameron Mitchell’s Rabbit Hole plops us down in the lives of Becca (Nicole Kidman, who also produced) and Howie (Aaron Eckhart), a fortyish married couple rattling around an East Coast dream house. In the film’s first scenes, the couple acts out a domestic “normal” that’s so obviously in quotes, we know something must be terribly wrong.

Mitchell, the creator, director and star of Hedwig and the Angry Inch and the writer and director of the 2006 Shortbus, teases us through a few fake-outs (phone ringing in the middle of the night — it’s just Becca’s sister, who needs a ride) before revealing that the film’s central trauma happened long before we got there: Becca and Howie’s young son was killed in an accident, and months later, the couple is still trying to figure out how to go from “normal” to normal.

Sensitive hunk Howie thinks that they can get there by going to weekly group-therapy sessions, where similarly bereaved couples sit in a circle of sad. The hyper-competent homemaker Becca (an unexpected overnight guest isn’t a burden but an excuse to whip up a crème brûlée), who gives off the sense of being tightly wound long before the transformational accident, reluctantly tags along. Then, after the kind of awkward incident that always happens in movie therapy and never in actual therapy, Becca asks Howie if he minds if she gives up on group.

With the wife away, Howie starts getting close to Gaby (Sandra Oh), whose spouse is also absent. Howie catches Gaby smoking pot in the meeting’s parking lot, and soon they’re flirting over Skee-Ball (yes, Skee-Ball).

Meanwhile, Becca starts stalking Jason (Miles Teller), the 17-year-old high school senior who was driving the car that killed her son. It’s never really clear what she wants from Jason. But as the grieving mom and the teenager embark on a series of afternoon rendezvous (the two meet in public and mostly talk, awesomely, about science fiction), it becomes evident that the mourning mother’s motivation isn’t as simple as revenge
or retribution.

Becca and Howie’s extracurricular relationships somewhat redeem a movie that’s otherwise a sledgehammer of plot and score. These weird, chaste-but-intimate courtships, mostly undefined and regressive on both sides, feel organically murky; their narrative convenience is overcome by the fact that they truly resemble the “how did that happen?” bad-idea relationships that so often spring from trauma in real life. Not so true to life is the montage that explains how both relationships resolve, with major decision points coming for both Becca and Howie at virtually the exact same time, on the exact same night.

Mitchell made a name for himself telling stories that encourage the exploration of subversive desire. Rabbit Hole acknowledges such desires, only to ultimately suggest that they’re better left repressed. But here the proceedings are so lifeless that you find yourself rooting for the narrative to fully tread into the disaster zones with which it flirts. (Adulterous grief sex? Bring it! Statutory rape of the teenager who killed your kid? Even better.)

Rabbit Hole‘s tastefulness — a schematic acting showcase of scenes — just punishes Becca and Howie, and the audience, even further. As both halves of the couple display signs that, no matter what transpires, they’ll give their miserable marriage one more good-faith try, I wondered: Haven’t they — and we — suffered enough?