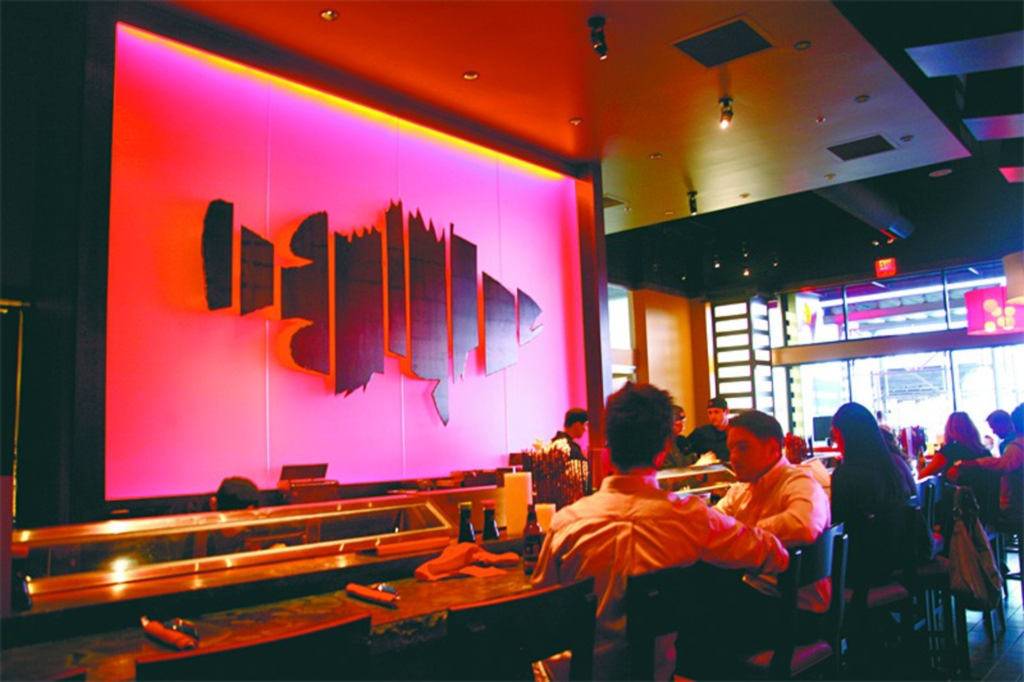 There’s a scene in The Hunger in which David Bowie and Catherine Deneuve — playing two of the most elegant, seductive vampires ever — prowl a New York nightclub that’s shadowy, loud, lurid and sinister. I couldn’t get that image out of my head during my visits to Ra Sushi, Leawood’s new installment of the Arizona-based bar-and-restaurant chain. Done in sleek tones of deep black and blood red, with a staff of extraordinarily pretty servers, the place has loads of sex appeal, that’s for sure. It has the potential for inspiring all kinds of hunger. What I worry about is its soul.

Ra Sushi is as polished and smooth as a moonstone and does for sashimi and sushi rolls what P.F. Chang’s does for Hunan pork and mandarin chicken: It makes the cuisine seriously less ethnic and more of an experience than merely a meal — one in which the servers all speak perfect English. While P.F. Chang’s puts a hip American spin on Asian fare, the corporate owners of Ra Sushi do the same for sushi, even if this particular Japanese import has become so assimilated into American culture that it’s for sale at Sun Fresh and Hy-Vee.

My friend Linda, who has traveled throughout Asia, loved Ra’s theatrical interior. It reminded her of a wildly successful restaurant in Shanghai that was also loud and vibrant and designed in comparable colors: “Red and black, that’s what they call ‘Chinese for tourists,'” she told me. “The place in Shanghai also had the big-drum light shades and the red-globe light fixtures. People love that look. Hey, I love that look!”

There are things to love about Ra Sushi, too — not just the look of the place but also the smooth operation. It runs like a dream. No matter what I ordered, on any of my visits, it arrived in a matter of minutes, as visually beautiful as anything in the Japanese collection at the Nelson-Atkins Museum of Art. The kitchen crew arrives early (like the staff at P.F. Chang’s) and preps the food with the precision of a state-of-the-art factory. You want dumplings? They’re ready in a flash. Flash may be the operative word here. Many of the dishes are flash-fried — gyoza dumplings and squares of tofu, tempura shrimp and even the most flamboyant of the sushi rolls: the Viva Las Vegas.

Our server told us that this creation, which must have been inspired by Vegas showgirls, is the best-selling roll here. And why wouldn’t it be? It’s not a roll at all but a chorus line of little cakes made from imitation crab (they call it kani kama here, I guess for dramatic effect) and cream cheese, rolled in rice and seaweed, dipped in tempura batter and flash-fried; then come a dollop of a spicy tuna-and-crab blend, a dusting of spinach tempura flakes and the headdress, as it were: a translucent slice of fried lotus root. It’s as tasty as it is pretty.

We started that meal with a tiny bowl of an excellent seaweed salad, fresh and delicately seasoned with a fine sesame vinaigrette. Another popular starter here, pineapple cheese wontons, sounded like some irresistibly vintage Trader Vic’s recipe, but they weren’t all that special. The little wedges of fried wontons were stuffed with a bit of cream cheese and pineapple, while the roasted pineapple dipping sauce had a surprisingly punchy kick. It was a novelty dish that I wouldn’t order again.

Sauces were all superb here, though that didn’t stop Linda and Richard from requesting ginger and wasabi for some of their sushi. “I think they prefer that you don’t mess with this stuff,” Linda said as she mixed a dab of the green horseradish paste with a splash of soy. “The sauces here are the big attraction.”

Well, they certainly were to me. The Tunacado plate’s sesame-dusted, seared tuna sashimi and soft avocado were wonderful naked but were heavenly when dipped in creamy chili ponzu sauce. Airy squares of flash-fried dengaku tofu (which look like fat sugar cubes) were splattered with a red miso-ginger glaze, and the ginger-teriyaki dipping sauce served with the crunchy fried “Ra”kin shrimp was so enticing that I dipped everything into it but the plump dumplings from the potsticker soup. (That soup’s broth was so bland, I was tempted to pour some ponzu sauce into it.)

Starter dishes here weren’t inexpensive, but it was fun to share a variety of different items, such as the spinach-filled gyoza dumplings — sort of skinny, as dumplings go — with a kicky sesame-mustard sauce or even one of the three noodle dishes. Our server, the ragingly beautiful Jennifer, suggested soft tofu noodles with spicy tiger shrimp in a garlicky sauce that, though wonderful, was made with so much garlic that no elegant vampire was ever going to look in our direction.

In fact, flavors were so intense that the music, which had seemed overwhelming when we were seated, became almost understated after a while. Ra Sushi is big on the bold statement — the food isn’t just beautiful and flavorful; its fragrance is intoxicating, too. We even noticed, as we walked toward the restaurant from the parking lot, that we were already enveloped in a perfume of soy, cooking oil and spices. “The place smells good before you even get near it,” Linda said.

It wasn’t quite so easy to block out the noise on the afternoon that I lunched there with my friend Judith, who had eaten at one of the other locations in another state. (There are 25 or so around the country.) Our lunch wasn’t nearly as sexy as dinner had been, although the food came out just as fast. The watery miso soup was bland, and the vegetable tempura’s lovely, crispy armor protected mushy broccoli. A mango lobster roll sheathed with paper-thin slices of pale-yellow mango was quite good, though I’d been hesitant about ordering any dish claiming to be prepared with “lobster mix.” Mixed with what? The server offered to ask someone in the kitchen, but she never did. Judith decided that was possibly a good thing.

It was a nice lunch, but the dining room didn’t have the same vitality or drama as in the evening. I’m telling you, something happens here after twilight.