Quick and dirty Q’s from the Savage Love Livestream 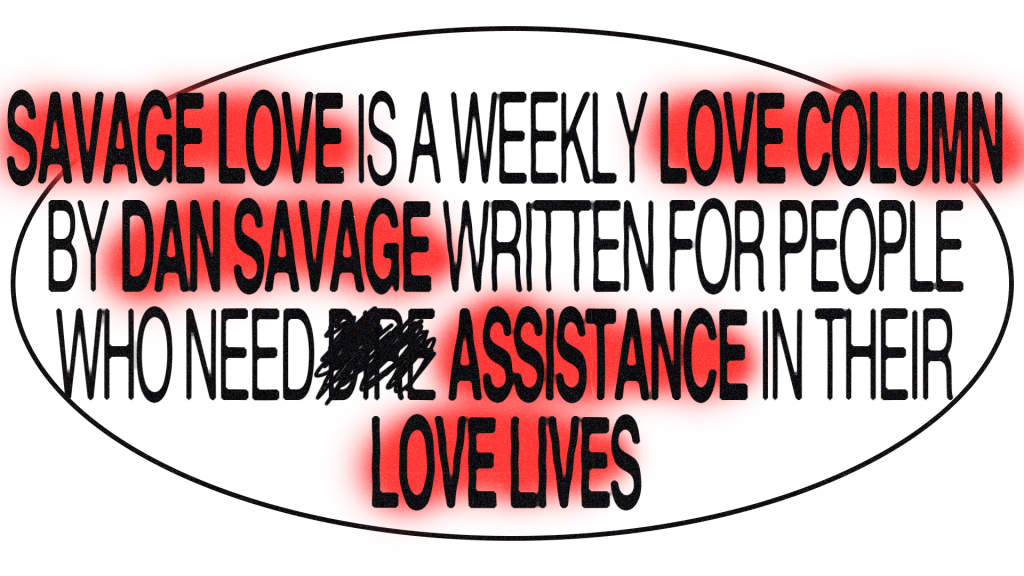 Dear Dan: I’m a bi widower and not out to anyone. While teaching a zoom class to young people I accidentally left open a tab that read “gay.” One of the students alerted me in the chat and I closed it right away. It was embarrassing and awkward. Should I just ignore it or address it in some way?

If you wanted to come out you could seize this opportunity to do so. If you don’t want to come out, well, you aren’t obligated to, gay tab or no gay tab. Unless parents are complaining and demanding an explanation, you’re free to shrug this off. And if someone assumes you’re gay because they saw a gay tab, well, you’re free to tell them that their mistaken… because you’re not gay, you’re bi.

Dear Dan: If my fiancé bought a house, do we say, “We bought a house”? I got laid off at the start of the pandemic, but her career has taken off and she’s proud of being able to afford a house all on her own. So how do we keep things respectful while still honoring her accomplishment? She wants the house to feel like mine as well. (I’m a dude.)

To casual acquaintances you could say, “Hey, we got a new place.” To close friends and family you could say, “She’s doing so well that she bought this house—I’m really proud of her and so lucky to be with her.” Hell, you could say those things to casual acquaintances and close friends interchangeably because both are true. And assuming you live in a marital property state, Mr. Dude, the house becomes yours too after you’re married. In the meantime you can earn a little sweat equity (and homeowner cred) by taking the lead on fixing the place up.

Dear Dan: I have a question about the “tech-savvy, at-risk youth” who work on the Savage Lovecast. Wouldn’t it be nicer to just refer to them as the tech-savvy youth? How do they feel about having the “at-risk” label applied to them? Surely it gives you guys a perhaps deserved pat on the back, but I can’t help thinking that little bit of stigma could be damaging. I was once an “at-risk” youth myself and even though I enjoyed and benefited from programs that were specifically created to help teens/youth in my situation, I was always keenly aware that it made me feel “less than” and like I needed special treatment.

I wasn’t trying to give myself a pat on the back when I started referring to the kids who were working on the Lovecast as the “tech-savvy, at-risk youth.” It was just a joke—maybe not a funny one—as they were all certainly tech-savvy, for sure, but the only risk they were running was being in the same room with me. I’m sorry if that joke reminds you of a time in your life when you felt “less than.”

Dear Dan: We have a friend who could be a unicorn. They have already subtly expressed interest though they are generally possessive and need to be “number one” in a relationship. We’re interested but we worry about their possessiveness causing problems.

I’m guessing your friend is hot—I mean, that would explain why you’re willing to overlook how emotionally unsuited they are for the unicorn role. Because if you’re looking for someone to play a sexy-but-subordinate role in your relationship, if you’re not seeking an equal partner and/or you’re not open to your unicorn becoming an equal partner, the last person on earth you should consider for your unicorn is someone you know to be possessive and interested in being first, not last.

Dear Dan: I’m a 27-year-old queer/poly woman from NYC. My question: I used to babysit my friend’s baby. And when I would show up to babysit, her husband would be there to let me in to the apartment and we would chat for ten minutes before he left for work. I don’t babysit anymore, but sometimes he texts me a picture of the baby and I’ll reply with, “So cute!” That felt normal. But one day he texted me two selfies. I didn’t reply because I thought that was weird. Is this something I should mention to my friend? I can’t tell if this is weird enough to bring up to her. Or is there something I should have said to him?

You don’t know what’s going on in your friend’s relationship—maybe flirting with others is allowed—but do you know how you feel about her husband sending your selfies: you don’t like it. If your silence wasn’t enough to put a stop to it and he sends more photos and/or messages that make you feel uncomfortable, tell him to knock it off. If he doesn’t knock it off, tell him he’s gonna leave you with no choice but to alert his wife. If he still doesn’t knock it off, alert his wife.

Dear Dan: I’m 39 years old, cis, and female. COVID has really tanked my sex drive. I’ve masturbated like twice in the last four months. I guess my question is… do you think things are gonna go back to normal? Please tell me yes.

Dear Dan: I have imposter syndrome when I go to rope jams and such, but I really love the community of kinksters.  Is it ok to go to kinky events even if I have trouble identifying my kinks?

So long as you’re respectful—so long as you aren’t gawking or taking photos without permission or making shocked faces—you’re more than welcome at most big kink events. Sometimes the hosts of smaller and more intimate play parties have rules that would preclude the attendance of someone who had no kinks of their own or had yet to identify their kinks; at smaller parties the host might want everyone to be in a certain kind of gear or interested in a certain kind of play. If you’re wondering if you’re welcome to observe the play at a particular rope jam or event, email the organizers and ask.

Dear Dan: I’ve got a friend who wanted to do pet-play and talked about being a cow and bought breast pumps to try and start lactation. Have you any advice on how to safely support her in this? I’m potentially open to play with her, if it’s safe, and I’m curious about her even being able to start lactation.

Do people keep cows as pets? Regardless, according to the La Leche League, regular use of a breast pump can “induce lactation,” which is “the official term for making milk without pregnancy and birth.” So the sooner your friend gets started with that pump, the sooner she can pretend to be your sexy, sexy pet cow.

Thanks again to everyone who joined us for the livestream and we’re going to schedule another one very soon!