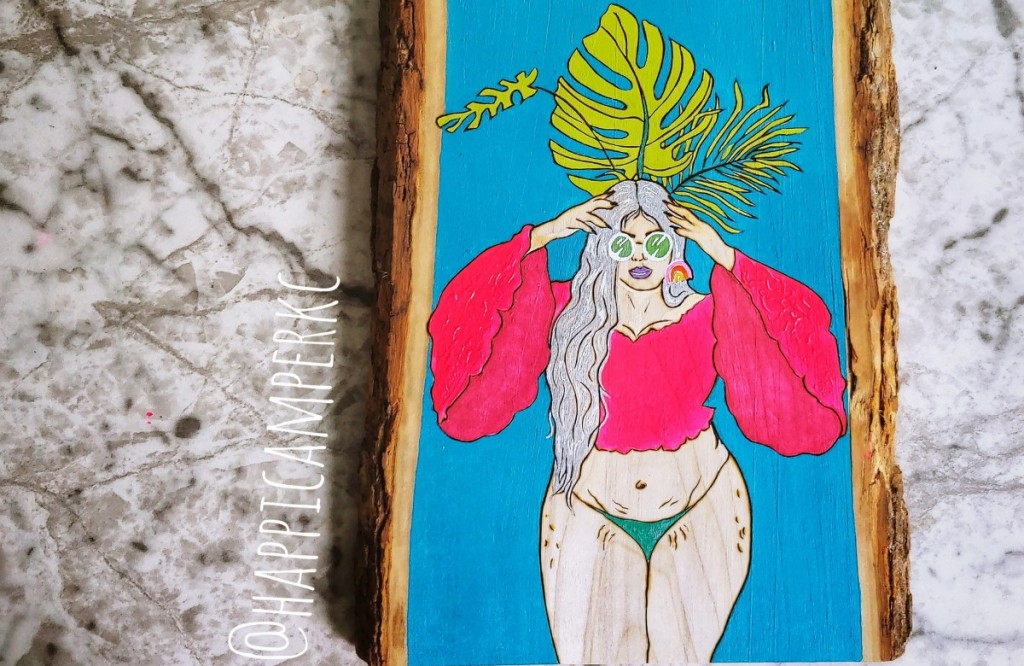 Megan Colwell, the creator behind @happicamperkc, is a pyrography artist. “Pyrography,” she says, “is just a fancy word for wood burning.” It took a few years for her to fully understand—and eventually market—her art, which is meant to uplift and empower.

As Megan came to terms with mental health and her own value as an artist and businesswoman, she began to question the way women’s bodies are often unhealthily idealized in contemporary art. This querying led her to a community of artists in the Kansas City area with similar ideas about body image, such as @wmnknd, a boudoir studio centered around inclusivity in photography.

Megan has seen growth in terms of social media presence, though this isn’t how she measures the value of her work. Nor should anyone. However, her Instagram page does have upwards of 11K followers. More importantly, social media can be reciprocal, she says. The people want vulnerability, visibility—to see themselves in the art they consume and to not feel othered by society’s unrealistic anatomical standards.

Recently we spoke with her about the value we place on ourselves according to job title or body image, branding, and the looming influence of the internet. 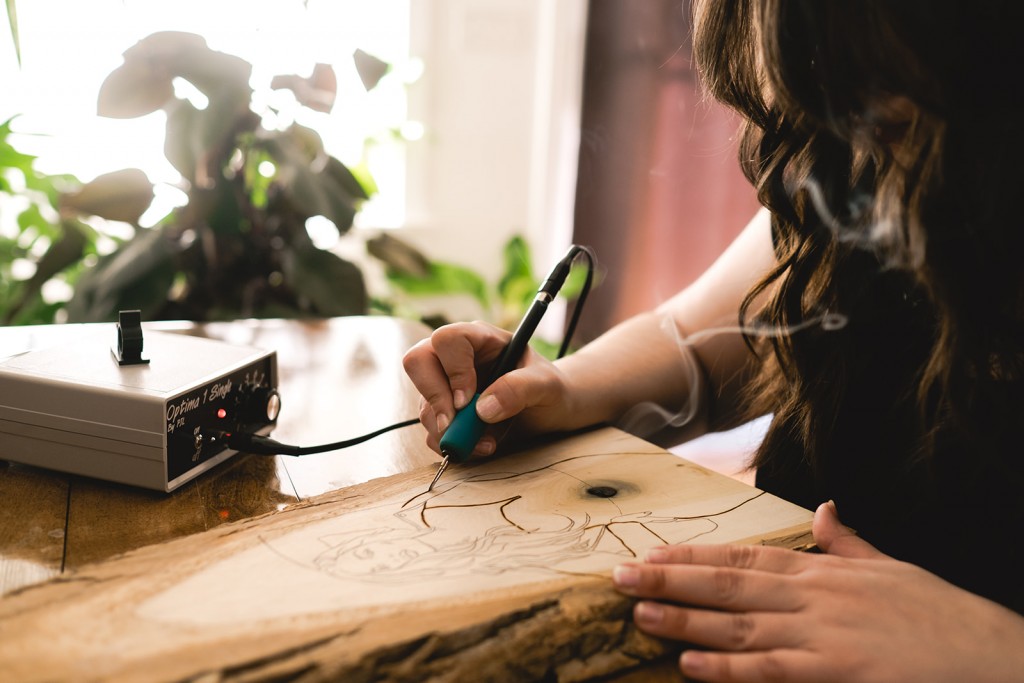 How did you get into wood burning in the first place? It’s a unique medium: I’ve always been a creative person. When I was a kid, I made wood art and sold it at the end of the driveway. My only customers were the dog catcher and the post office lady (laughs). I was in government construction management and found myself not driven anymore, not inspired. I needed a hobby.

My husband took me to Lucas, Kansas, the Midwest home of folk art. I thought I needed to go to KCAI to be an artist, but then I thought, you know what? I can do this. Wood burning became a huge pool of nostalgia and comfort for me. It felt meditative, like this Zen state.

It sounds like, for you, wood burning represents a sort of therapy: Yes. 2013 was a terrible mental health year for me. I realized that wood burning forced me to be present, whereas [otherwise] I struggled with thoughts of the past or anxiety about the future. I got this four-foot piece of wood to make a mural with—I think I put over 200 hours into it. That’s what got me through a really tough year.

I want to live in a world where viewers and consumers of art can see versions of themselves in the art. Your work is a good place for that connection: Up to a certain point in my creative journey, I was creating art [that portrayed] the ideal woman, not realizing I had been heavily influenced by social media. Then a friend asked for a commissioned piece. She loved my style but wanted it to be ‘fat art.’ I’d never heard the term before. We say ‘curvy,’ ‘thick,’ whatever. She’s a therapist who focuses on body positivity, so we had this beautiful opening conversation about inclusion and representation. When I posted her commissioned piece, it opened the floodgates of not only community and healing, but also collaborations. Once that piece of art hit, I knew it was exactly what I needed to be making.

Has marketing yourself been difficult? I’ve always hated social media, so it’s hard for me to think about that side of the work: It’s ever-evolving. I’m a brand strategist by trade and own another company called @happidesk. I’m a good writer and hard worker, so when I started branding @happicamper, I knew it had to be authentic to me. I want people to know that I put my heart on my sleeve—that I’m from Kansas City and live in a camper. And of course, that I’m a wood burner. My main mission is to inspire and uplift others through the art of pyrography, but it took time to define my work enough to open a Patreon page, for instance. Now I know that I like simplicity and color. I know I want to support body positivity and body type inclusion.

It took a while to even show my face on camera, but once I did I started connecting with people. In my art, this is what real people look like. And that’s beautiful. That’s okay.

I agree. We should show off our vulnerable sides more often: Yes. It blows my mind that the people who support me are complete strangers. They don’t know me at all, yet I feel so connected to them. People genuinely like what I’m doing, and I nurture that community rather than think outwardly about vanity metrics or followers.

It’s a reciprocal situation, I think: Right. I always say I’m like a cheerleader for the community. I was not the cheerleader type in high school (laughs). But you find your people.

Social media is hard, but it’s important. You wouldn’t be doing it if you didn’t want more exposure; that’s the whole point. But the toxic part is when you start to link it to self-worth. If something caps out at 200 views, don’t sweat it. If those 200 people surrounded you right now, you’d be overwhelmed. Those are 200 real people that you reached out to—they saw what you did. Maybe they didn’t double-tap, but they’re watching. You put in the work, and you get it back.

There are also the people who say the market is saturated creatively. I think talent is like 10% of it. 90% is just straight-up hustle. Maybe I won’t be an artist in the Nelson Atkins. Maybe I won’t be featured on Antiques Roadshow after I die. But you know what? I’m working in the field of something I love.