For 23 years, efforts to add sexual orientation and gender identity to the Missouri Human Rights Act have stalled 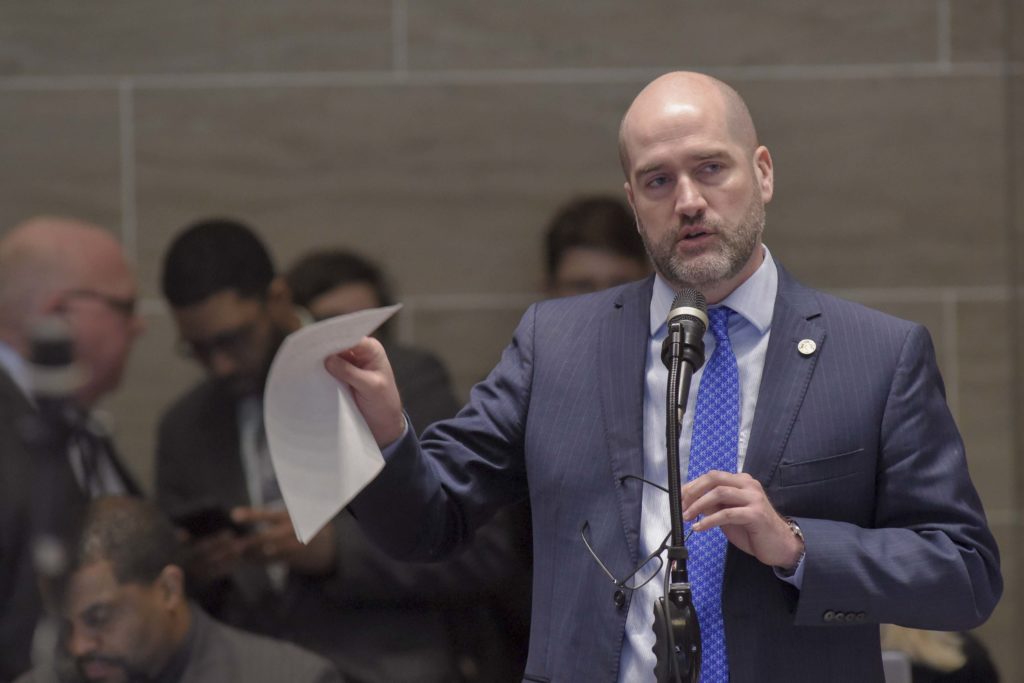 Missouri Sen. Greg Razer hadn’t planned to speak on an amendment that purported to prevent discrimination based on a person’s vaccination status by barring “vaccine passports.”

But he couldn’t help but see the parallels to his own fight.

“They had a very good point that there are definitely people who will discriminate and that it’s so egregious that we have to write these things down in law,” said Razer, D-Kansas City. “I thought, ‘Well, I’m gonna have to jump in here and have a conversation about that.’”

Razer is one of only six openly LGBTQ members of the Missouri legislature, and the only member in the Senate.

Under Missouri law, a person can still be fired, denied housing, or kicked out of a restaurant for being gay or transgender—or simply being perceived as gay or transgender. For 23 years, state lawmakers have pushed to close that gap and add protections for LGBTQ Missourians.

Bills sponsored by both Razer and Rep. Tom Hannegan, R-St. Charles, would add sexual orientation and gender identity as protected classes under the Missouri Human Rights Act, in addition to already protected categories like race, religion, and age.

With the end of session less than six weeks away, neither bill has been heard in committee—one of the first steps to a bill becoming law. It’s a familiar story that has played out the last two decades lawmakers have filed the bill, often referred to as the Missouri Nondiscrimination Act, or MONA.

So with time ticking away on the 2021 session, Razer attempted to tack the nondiscrimination act onto Sen. Bill Eigel’s amendment prohibiting vaccine passports.

It failed by a vote of 15 in favor to 16 against, but the close margin—and the fact that five Republicans joined all 10 Senate Democrats in support—left advocates feeling hopeful.

“With that narrow of differentiation in the vote, it certainly sways our way that we’ve made significant progress in convincing the Missouri legislature that MONA is a necessity for the state to make progress to move forward,” said Shira Berkowitz, the communications director for PROMO, a statewide organization that advocates for LGBTQ equality in Missouri.

Eigel, R-Weldon Spring, said during debate that he wanted every person in the state “to enjoy the same rights that are protected under our constitution and under our law.

But Eigel said his amendment was aimed at prohibiting the introduction of new classes of people—vaccinated versus unvaccinated. He said Razer’s amendment would do the opposite.

“I am trying to define that world in a way that doesn’t portray individuals in one class or another, because there’s no class that the government can create that encapsulates the totality of who you are,” Eigel said.

Meanwhile, in the House, the Children and Families Committee hasn’t held a hearing on Hannegan’s bill. But it has debated one that would limit healthcare for transgender youth for the purpose of gender confirmation.

After action was postponed last month, HJR 53, which would let voters decide whether to bar transgender youth from participating on the sports teams whose gender they identify, was passed out of the House Rules Committee last week.

According to the Movement Advancement Project, a nonprofit think tank, Missouri is one of 21 states that does not have an explicit prohibition on discrimination based on sexual orientation or gender identity in housing and one of 23 states when it comes to public accommodations.

At least 20 local ordinances are in place across Missouri.

In the past, adding protections for LGBTQ Missourians faced opposition from groups like the Missouri Chamber of Commerce and Industry, who argued additional classes could put businesses at risk of more lawsuits.

Their stance appears to have since shifted.

“We do not have a position on that legislation,” said Karen Buschmann, a spokeswoman for the chamber.

Meanwhile, for some, including both sexual orientation and gender identity is still a sticking point. Berkowitz said it’s not a compromise PROMO is willing to make—especially in the face of a wave of anti-trans legislation nationwide and in Missouri.

“We see them as inseparable,” Berkowitz said. “We can’t, as a state, pass protections that understand the needs of the lesbian, gay, bisexual community and leave behind the transgender community as well.”

Rep. Mike Stephens, R-Bolivar, filed a bill in 2018 that would have only added protections based on sexual orientation—but excluded gender identity. He withdrew the bill that same session.

Stephens said it’s not because he was trying to be unfair to transgender Missourians, but found that the discussion often dissolves into topics like bathrooms and sports teams “that just explodes and derails the issue.”

Stephens hopes to see MONA at least get a hearing this session, and stressed that it’s an issue of equality that has economic implications for the state in order to attract companies whose employees will want to call Missouri home.

“I’m going to be on board no matter what,” Stephens said of supporting MONA, later adding: “I just have had to come full cycle on this issue and understand it much more deeply and broadly and personally. You grow up. You grow old. You hopefully grow wise.”

Adding protections for LGBTQ Missourians has seen fits and starts, with it passing out of the Senate in 2013 and out of a House committee for the first time in 2018.

Among the senators who voted in support of MONA in 2013 was now Gov. Mike Parson.

But with time running out this session, if MONA finds success it will be as an amendment on another bill.

“I think it will be a moment when lightning strikes,” Razer said. “It will likely be an amendment on the right bill at the right moment. And there will be a day where this finally—it just happens.”

While the long fight to add protections for LGBTQ Missourians trudges onward, what lawmakers and advocates said they have seen change is greater representation.

Just three years ago, there were only two openly LGBTQ members in the legislature. Now, there are six.

Razer said it’s helped reframe the issue for some lawmakers, who see they aren’t just voting on “a ‘they’ out in the ethos,” but on the rights of their colleagues. He’s seen that impact in private, one-on-one conversations with fellow lawmakers, who ask questions of him knowing they won’t face judgment.

It’s been difficult to stand on the House and Senate floor for the last five years and “sort of rip my chest open and have these conversations,” Razer said.

But it’s also been a privilege he has been proud to take on.

“It’s also an honor to be in a position where I can speak for the thousands and thousands of LGBT Missourians so that they know they have a voice and have someone here fighting for them,” Razer said, later adding: “There’s that old saying that representation matters. And it really does.”