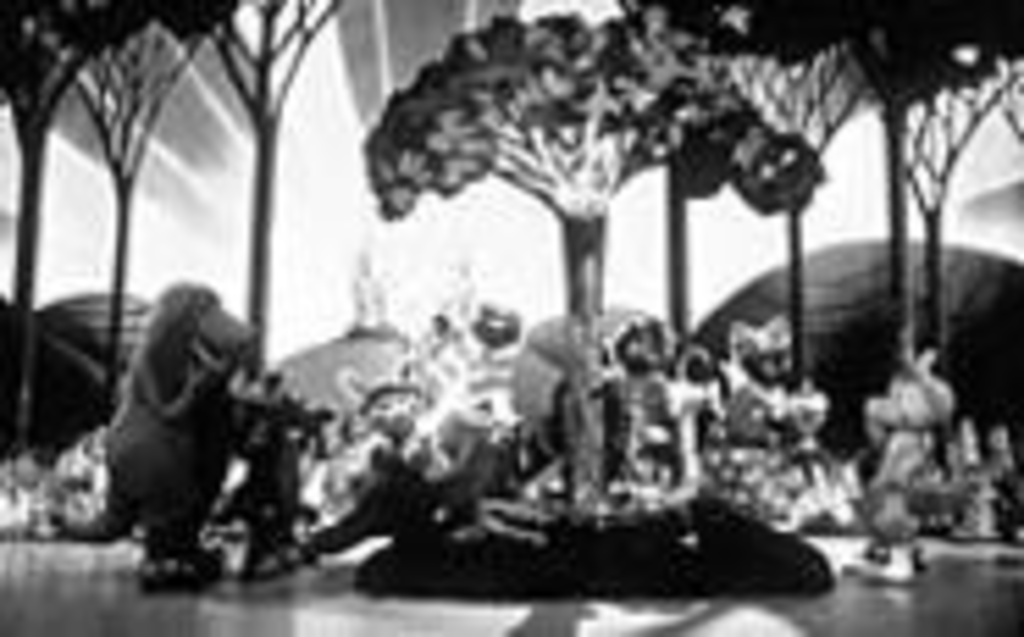 I love you/You love me/We’re a happy family/With a great big hug and a kiss from me to you/won’t you say you love me too? — “I Love You,” Barney

Damn the cynics who say it is impossible for a large purple dinosaur to rock — for Barney, as the large purple dinosaur in question is commonly known, does rock, and he rocks hard. To drive this point home, Barney went so far as to title his 2000 CD Barney Rocks. On that disc, as on many of his releases, Barney included his signature tune, “I Love You,” which explores the same familial themes that The Ramones examined on their 1978 album track “We’re a Happy Family.” In fact, “I Love You” is to Barney what “I Wanna Be Sedated” is to those original punk rockers. It’s also the final key in unlocking the mystery of Barney’s Musical Castle, Barney’s latest starring vehicle and stage show, which sees him entering the hallowed halls of such rock operas as The Who’s Tommy and Queensryche’s Operation: Mindcrime.

“The show basically is about children going through an enchanted forest and finding a crown,” reveals Sloan Coleman, executive producer of Barney’s Musical Castle and a close confidant of Barney’s for the past eleven years. “It must be the king’s crown, so they figure out that they need to get the crown back to the king.” Coleman speaks in lieu of her ever-elusive employer, who like many other great artists is somewhat press shy.

However, with a little prodding, Coleman spills the proverbial beans and discloses that Barney’s Musical Castle unites kindred spirits at its conclusion. “When you see the parents at the end singing the ‘I Love You’ song with the kids, you can just cut the music and hear the whole audience singing,” she confides. “When you watch the children singing those songs with Barney, you just go, ‘That’s what it’s all about.'”

While the show treats fans to Barney’s lengthy list of smash hits, it also provides insight as to the next step of his artistic growth. Barney is rumored to be moving out of what critics have dubbed his “knickerbocker” phase toward a more earthy, organic yet still bootylicious sound, something of a mix between the Dave Matthews Band and Parliament/Funkadelic.

“You’ve got ‘If You’re Happy and You Know It,’ ‘Hey Mr. Knickerbocker’ and ‘If All the Raindrops,'” Coleman says. “Those are his really big hit songs. We start off with the songs, doing a little medley so everybody can get on their feet and start dancing and singing with Barney right at the top of the show. Then we pretty much carry it all the way through, just adding a couple of new, kind of funky songs for some of the knight’s dances.”

Barney, Baby Bop and the enigmatically named BJ enjoy a devoted following similar to the Grateful Dead’s Deadheads. And like the Dead, Barney has never stopped giving back to his fans, giving them valid reasons to shower him with hugs. But should these toddlers fail to appreciate the prehistoric one’s artistic growth, Barney’s handlers, who are used to addressing controversy, are prepared to weather the storm. “We’ve had a lot of backlash in regards to Barney because of his simplicity, but that’s the thing that attracts the two-year-olds. They love the repetition; they love the simplicity,” Coleman says diplomatically, bringing another Ramones resemblance to the fore.

Barney’s contributions to his young fanbase extends beyond offering them instantly familiar sing-alongs. A portion of the proceeds from Barney’s Musical Castle will go to National Children’s Alliance, a nonprofit organization that is dedicated to eliminating child abuse. Barney also will visit NCA’s Children’s Advocacy Centers at each tour stop. As for the kids he’s worked with directly, his Menudo-esque Backyard Gang, Coleman reports that none of them has succumbed to the child-star breakdowns so often chronicled on E! True Hollywood Story.

“They’re all doing fabulous,” Coleman says. “Three of them are in college; one of them is married and has a baby of her own. They grow up quickly, so you have to keep changing out the kids.”

It’s comforting that his revolving cast of costars remains so well-adjusted, but it’s simply amazing that even with the massive fame he has achieved, Barney has yet to cop a superstar ego to rival his purple celebrity peer Prince. Even Barney’s contract rider hasn’t changed much during his ascent to household-name status. “He loves peanut butter and jelly sandwiches; that’s something that Barney always likes to have,” Coleman says. “That and a lot of Gatorade to keep his energy up. Got to have that Gatorade. It’s pretty tiring out there doing those shows night after night.”

With those tame substances being Barney’s only vices in an otherwise clean lifestyle, Barney surely will continue to entertain new legions of fans, beginning to do so almost as soon as those eventual devotees escape their mothers’ wombs. His relationship with the little ones is difficult to classify, but Coleman has found a way to put it into words. “People say, ‘What is it that attracts the kids to Barney?'” she says. “The way that I try and explain it to them is that he is the child’s favorite uncle. You know when your uncle would come to play and he’d do a lot of fun stuff with you? That’s kind of what Barney’s relationship is with children.” We’re a happy family, indeed.