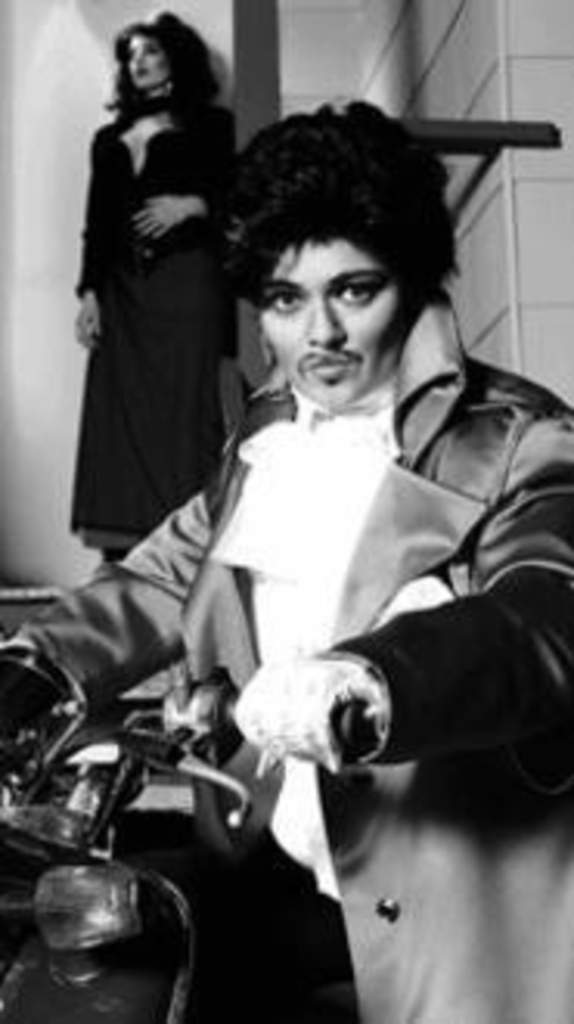 Before presenting an Oscar last week, Prince was introduced as “Academy Award-winner Prince.” I thought I was hearing things until I recalled his shrouded eminence accepting an Oscar in 1984 for Best Original Score. No, not for Under the Cherry Moon but the less egregious Purple Rain. For better or worse, the film went on to inspire everything from the so-bad-it’s-good Glitter to the similarly plotted 8 Mile, which also brought its star an Oscar (for best song).

To give Purple Rain the proper Late Night Theatre treatment, David Wayne Reed has adapted the screenplay into The Show Formerly Known as Purple Rain. Reed has said on the record that his source was “horrible” and “misogynistic.” To counter the latter, he decided that the only way it could be staged was to cast it with female actors. I’m not convinced, though, that two wrongs make a right in this case.

Playing the former symbol (who goes by several names in the show) is the chameleonlike Jessalyn Kincaid, who has skin tinted several shades darker than her own and a vivid presence that, surprisingly, takes awhile to fully ignite. As did Prince in the film, Kincaid plays a struggling performer whose purple bedroom offers the only solace from a physically abusive father and an alcoholic mother, played here, of course, for laughs. His diminutive self-esteem is boosted when he’s singing or under the spell of gold-digging, untrustworthy hoochie Apollonia (Corrie Van Ausdal).

Prince (Kincaid is billed in the program only as Prince) also has allies in fellow Revolution members Wendy (Shannon Michalski) and Lisa (Lauretta Pope), whom Late Night gives strong lesbian tendencies. His chief rival is Morris Day (Kimberely Queen), who has less talent but bigger connections. (His sideman, Jerome, played by Laura Frank, is entirely forgettable.) The show is less a rags-to-riches story than it is an extended battle of the bands. The ultimate prize isn’t money but approval — from both the crowd at the real-life Minneapolis nightclub, First Avenue (accurately designed by Jon Piggy Cupit), and the fickle Apollonia, whose affections never prove to be worth fighting for.

Most of Late Night’s shows are parodies, but this one seems to be a parody of Late Night — and parody twice removed isn’t all that genuine or funny. Many of the jokes die on delivery, as do such bits as spraying the audience with water whenever a character cries. The latter simply leaves people silent and damp. Something is amiss when the biggest laughs come from the self-referential jokes about Late Night Theatre itself.

I’ve seen Kincaid deliver hauntingly beautiful renditions of standards at Bar Natasha, but until her penultimate “Purple Rain” and the finale, “I Would Die 4 U,” the songs seem ill-fitted to her range. There’s a gift to playing a bad actor, which Van Ausdal aces in her early scenes as Apollonia. And in the smaller roles, Pope performs an interesting, largely successful version of “Nothing Compares 2 U,” and Michalski wholly grasps a Minnesota accent. Given all the brocade, spangles, leather and lace on the stage, one wishes the show were as rich and textured as Georgianna Londre’s costumes.

What’s lacking is that exchange of energy between the performers and the patrons that often gives Late Night shows an extra buzz. Until the last 15 minutes or so, the show, directed by Kara Armstrong, is something uncharacteristic to the troupe: a static bore. At one point, when Prince is supposedly speeding down a highway on his scooter, a cast member holds up a sign that says “Dead Audience Ahead.” It rings more true than the company may like, and it’s not the audience’s fault.
Postscript: Of the two new musicals I caught recently in New York City, it’s the sillier of the two that scored bigger points and is more likely to be staged in Kansas City eventually — and, more than likely, every city of size in the country.

At face value, The 25th Annual Putnam County Spelling Bee (which moves to Broadway in April) has such dubious traits as adult actors playing middle school kids and the usually wince-inducing bit of audience participation. But the show is so relentlessly clever — especially James Lapine’s direction and Rachel Sheinkin’s book — and flawlessly acted that it leaves no room for nitpicking.

Competing in a school gym for a regional spell-off, the contestants represent a cross-section of kids who wear their outsider status like a badge of honor. There’s Marcy Park, the overachieving Asian kid; Leaf Coneybear, the nervous son of granola-eating home-schoolers; and the tubby weirdo, William Barfee (“It’s pronounced bar-fay!”), brilliantly rendered by Dan Fogler. The music and lyrics of William Finn (Falsettoland) predominantly go for laughs, with one poignant and beautiful exception about neglectful parents. For a guess at which Kansas City theater will get the rights, my money’s on the Unicorn Theatre or, if a song about an inconvenient erection isn’t too racy, the American Heartland Theatre.

Stephen Flaherty and Lynn Ahrens, whose Seussical made its children’s-theater debut last season at the Coterie, get all serious with their new musical, Dessa Rose, at Lincoln Center. Set in the South in 1847, the show stars Tony nominees La Chanze and Rachel York as, respectively, a black slave and the white woman who frees her. Though it’s stirringly sung by a perfect cast, the show is more admired than loved, and frankly, it’s not the least bit commercial.