Public health and policing: a pandemic’s answer to violence 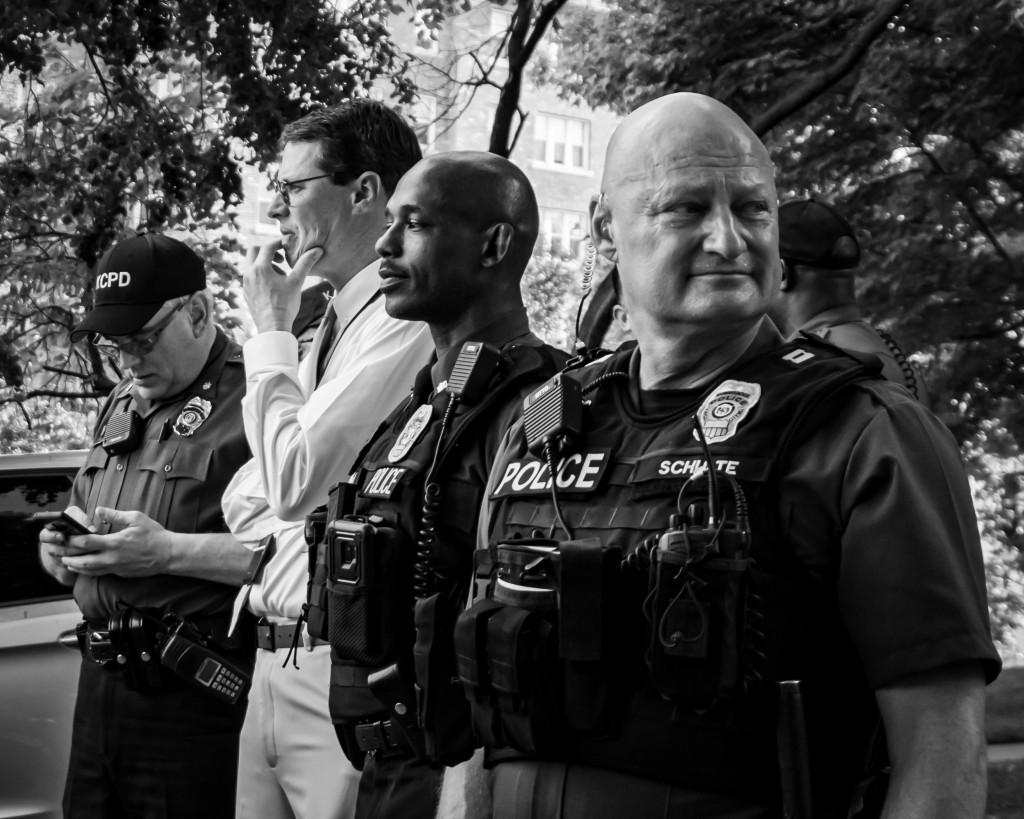 The sheer timing of our nation’s uprising for Black lives—in the midst of a global pandemic, when we’re more resilient and fragile than we could have imagined—is a significance historians will have to sort out.

Just as COVID-19 is reshaping the unthinkable, more Americans are accepting the raw truth that those four Minneapolis police officers weren’t the only ones responsible for George Floyd’s heartbreaking murder. It’s all of us.

It is us, the taxpayers, who approve police systems that leave more than 2,000 people like George Floyd, Elijah McClain, and Breonna Taylor dead each year, and Black communities ravaged by unconscionable betrayal.

We know a thing or two about broken systems.

The coronavirus pandemic revealed a healthcare system fraught with racial disparity and fragility. The Affordable Care Act and Medicare for All strive to overhaul a broken insurance system. In Kansas and Missouri, lawmakers could lift 450,000 people—a size roughly equal to Kansas City’s population—into health care if they modify Medicaid with a simple vote.

Healthcare and policing shape our society. They expand our vision of what’s possible. They are necessary and hard.

Any effort to fix a system needs to start with basic questions. In health care, we ask: How are we saving more lives? To fix our nation’s crisis of police brutality, are we honestly asking the same question?

In The End of Policing, author Alex Vitale traces 20 years of failed police reforms to a recurring pattern of flawed fundamental questions and beliefs around policing. He posed his core question to The Nation: “What is the actual mission of policing and what is its actual impact on people?”

We ignore these questions at our own peril. An urgent warning lies in Minneapolis.

In 2015, a landmark Obama Administration program selected five cities, including Minneapolis (home to George Floyd and his family) to pilot the vanguard of modern policing reforms: mindfulness, racial dialogues, implicit bias training, use-of-force, body cameras, the works. Two years later, violence remained rampant. Local residents explored the problem in-depth with MPD150, a comprehensive assessment that recommended a complete overhaul of the police department starting from scratch. The City Council refused. By the time George Floyd called out for his mama as he lay dying, surrounded by his taxpayer-funded public servants, the community hit a breaking point of anguish and pain.

We’re sinking money into policing at faster rates, even though it isn’t delivering results we need. Nationwide, police budgets have tripled since the 1970s. Chicago allocated $153 million in its 2020 budget—more than half of Kansas City, Missouri’s entire police budget—for police misconduct settlements alone. Although crime rates are lower, they haven’t dropped to match the cost, and crime in urban areas remains high. Homicides in Kansas City are expected to reach an all-time high in 2020. Policing is now the largest single budget item for most cities, even though police have low rates of solving crime (Kansas City’s homicide clearance rate is 43%), and studies have shown that less policing can lower crime.

In a twist only a mask-wearing hand-washer could appreciate, the same field-leading our response to COVID-19 is sparking a paradigm shift around the core question of policing.

Epidemiologist Gary Slutkin pioneered medical research over the last 20 years that reclassifies violence as a communicable, contagious disease. Those who commit violence or who are exposed to violence are experiencing disease, not a vague sort of moral rot. Violence joins a long line of diseases such as drug addiction and alcoholism -that were recently considered criminal or moral failings.

“[B]efore discovering what was causing epidemics of leprosy, plague, tuberculosis, cholera, and other infectious diseases, we frequently treated the people affected as ‘bad people’; we blamed them for the problem, and in particular lamented their moral character,” Slutkin said. The paradigm shift is taking off. The World Health Organization now categorizes violence as a disease, and some cities’ public health departments are initiating new research.

Violence spreads from those perpetrating it to those who witness it or receive the brunt of it, Slutkin observed. Someone who witnesses domestic violence, for instance, is more likely to commit a form of violence. A shooting incident spreads violence to its victims, police responders, and their families, neighbors, schools, churches, and to all of us via the front page of our newspapers. Once infected, we’re all more likely to spread it to some degree, in some way.

Once we see violence as a communicable disease, we see how our current models of policing are akin to a taxpayer-funded disease incubator. According to a recent Northeastern-Harvard study of police shootings, one out of every 15 firearm deaths in the United States are produced by police. For Black communities, the number jumps to one in 10.

Unless we open ourselves to a paradigm shift around policing and violence, we may be helpless to solve it. As Kansas City grappled with soaring violence in 2017,  Ken Novak, professor of criminal justice and criminology at the University of Missouri-Kansas City, told The Kansas City Star at the time, “it’s safer to be deployed as a soldier in Iraq than to be a young black man in Kansas City.” Such a heartbreaking claim should have clear solutions, but Novak and others cited in the story seemed to struggle. Novak mused, “I wonder to what extent that there is a culture of violence that is normal in Kansas City.”

Community-based (a.k.a., “not police-based”) anti-violence programs such as Cure Violence, Ceasefire, and Safe Streets are repeatedly proven to be effective. When Chicago launched a Ceasefire pilot program in 2012, homicides dropped 31% in the areas it was established. Kansas City implemented NoVA, or KC No Violence Alliance, to early success. But in Chicago and Kansas City, stories emerged of police culture clash. The programs struggled to gain department support, and soon closed. In Minneapolis, same story. The MPD150 report concluded that “efforts to reform [the police department]–aimed at addressing recruitment, training, discipline, oversight and transparency—are quickly and effectively neutralized” by the department’s culture.

Chief of Police J. Scott Thompson, who oversaw the rebuild of Camden, New Jersey’s police department, has repeatedly pointed to his department’s core culture shift around violence. In an interview with Bloomberg CityLab he said the goal was for officers “to identify more with being in the Peace Corps than being in the Special Forces. Destabilized societies need guardians, not warriors.”

Like Ceasefire and NoVA, CAHOOTS operators also admitted a culture clash with police — a “mutual mistrust” — that took decades to overcome. Eugene Police Chief Chris Skinner is now an advocate. “When [CAHOOTS] show up, they have better success than police officers do,” Skinner told CNN. “I believe it’s time for law enforcement to quit being a catch-base for everything our community and society needs.” Among those experiencing mental illness and homelessness, risks of death at the hands of police are far higher. Nationally, about 25% of people killed by police show signs of mental illness.

Former Dallas Police Chief David Brown agreed when he famously said, “We’re asking cops to do too much in this country. Every societal failure, we put it off on the cops to solve. Not enough mental health funding, let the cops handle it. Schools fail, let’s give it to the cops. That’s too much to ask. Policing was never meant to solve all those problems.”

Police proponents point to the public’s legitimate need for some sort of public safety presence on the streets. Non-violence advocates agree—but they point to other civic roles, not just police, who may be better suited to building positive, non-threatening relationships. Social workers, mental health counselors, public works teams, career counselors, special event staff, after-school programs—the jobs taxpayers defunded for decades in favor of costly police militarization—can be the civic ombudsmen our schools, neighborhoods, and job-seekers need, at a fraction of the cost.

These ideas are attracting fierce and sometimes misleading opposition. The Missouri Republican Party made headlines for claiming, without evidence, that if Kansas City gained local authority over its police department, the department would be disbanded, even as Mayor Quinton Lucas made it clear that disbandment isn’t on the table. The Republican Party’s knee-jerk reactions fail to solve, let alone admit, a broken system. While there will always be criminal threats that need skilled police intervention, our decades-long scope creep around the role of police reveals a fundamental failure to understand the true purpose of it at all.

These false assumptions around policing run deep. American policing systems were first formed as slave patrols and later expanded under Reconstruction, through a loophole in the 13th Amendment, as prison chattel systems to capture Black children, women, and men in forced labor camps. To this day, all-too-common perceptions of Black girls and women as “angry,” and of Black boys and men as “dangerous,” are false, racist ideas that feed antiquated notions about violence and policing.

As the movement for Black lives has made clear, a change in policing is just one part of society’s larger responsibility to create long-needed equality.

Kansas City’s latest high-profile corporate welfare case raises another example. If the city approves millions in tax incentives to BlueScope Construction (a company valued at $1 billion) to keep it from moving a few miles across the metro area, the lost tax dollars would directly defund public schools, libraries, and mental health resources that primarily serve Black youth. Kansas City Public Schools Superintendent Mark Bedell called out the move saying in part: “Financial decisions can be moral ones and this request is a violent economic practice.”

Bedell’s warning calls to question our own purpose, as taxpayers. Just as our systems should have a purpose, what is ours? Our medical field may offer an answer yet again.

It’s found in every doctor’s oath: “First, do no harm.”